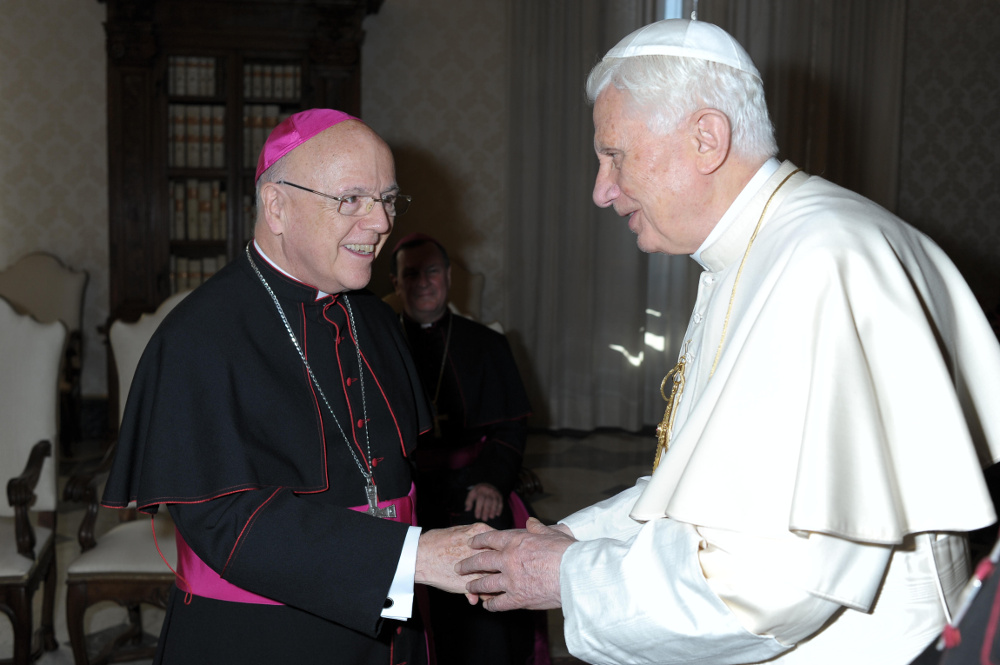 Now-retired Pope Benedict XVI greets retired Bishop David Foley of Birmingham, Ala., during a 2012 meeting at the Vatican. Foley died April 17 at the St. John Vianney Residence for Priests in Birmingham. He was 88. (CNS/L'Osservatore Romano)

Bishop David Foley, retired bishop of the Diocese of Birmingham, died April 17 at the St. John Vianney Residence for Priests in Birmingham. He was 88.

News reports said he had been battling cancer.

His funeral Mass will be celebrated April 23 by Mobile Archbishop Thomas Rodi at the Cathedral of St. Paul in Birmingham and burial will immediately follow in the cathedral's courtyard.

Foley's body will be received at the cathedral April 22 in the afternoon and a period for prayers will be held from 2-6:30 p.m. (CDT). Bishop Robert Baker of Birmingham will preside over the vesper service with Benedictine Abbot Cletus Meagher of St. Bernard Abbey in Cullman preaching.

Foley served 11 years as bishop of Birmingham. He submitted his resignation in 2005 at age 75 as required by canon law. He was then chosen by the diocesan consultors to serve for two and a half years as administrator of the diocese prior to Baker's installation.

The bishop's retirement was in name only: He never stopped being a priest. He would spend Christmas and Thanksgiving at prisons, would celebrate Mass at any parish when needed and would regularly help with confirmations.

Always humble, he quietly continued his ministry in recent years: visiting the sick at hospitals each week and celebrating Mass once a week for the elderly who were unable to travel.

The bishop was born Feb. 3, 1930, in Worcester, Massachusetts. He moved to Washington with his family when he was 4. His father was a special assistant to the U.S. attorney general from 1934 to 1962.

After studies at St. Charles College in Catonsville, Maryland, and St. Mary's Seminary in Baltimore, Fr. Foley was ordained a priest of the Washington Archdiocese May 26, 1956.

Over the next three decades, he held a series of parish posts, including pastorates from 1970 to 1986, and served on various archdiocesan committees. He was made archdiocesan secretary for clergy in February 1986, shortly before he was named auxiliary bishop of Richmond, Virginia.

For many years, Foley was a regular guest on the "Pillars of Faith" program broadcast on the Eternal Word Television Network, or EWTN, based in the Birmingham Diocese.

In 2000, he issued new norms for televised Masses produced in his diocese — including most notably EWTN telecasts of the Mass, which air worldwide several times a day. One of the norms specified that when a priest stands at the altar during a televised Mass he is to face the people. Prior to the decree, EWTN regularly featured Mass telecasts in which the priest at the altar faced away from the people.

"May God reward him for his life of service to the church and may he rest in peace," said Michael Warsaw, chairman and CEO of EWTN in an April 18 statement.

He said even though the bishop had occasionally disagreed with Mother Angelica, EWTN's founder, he frequently visited her after she suffered a stroke and had brain hemorrhage to pray for her.

Foley was preceded in death by his father, George Foley, his mother, Ellen Vincent Quinn Foley, and his brothers.

Less than two weeks before he died, the bishop issued a handwritten note to Catholics in the diocese that was published in parish bulletins the weekend of April 14-15.

The note said he had been blessed in the outpouring of love, cards, spiritual bouquets, phone calls and other greetings in recent days.

"I feel a great desire to respond individually to you. This is just not possible," he wrote.

The bishop said his illness was progressing "with some suffering and inconvenience" and he appreciated the care he had been receiving.

A statement from the Diocese of Birmingham thanked Hope Hospice, caregivers, doctors, and St. John Vianney Residence for Priests staff for "the superb care given to Bishop Foley during his illness."