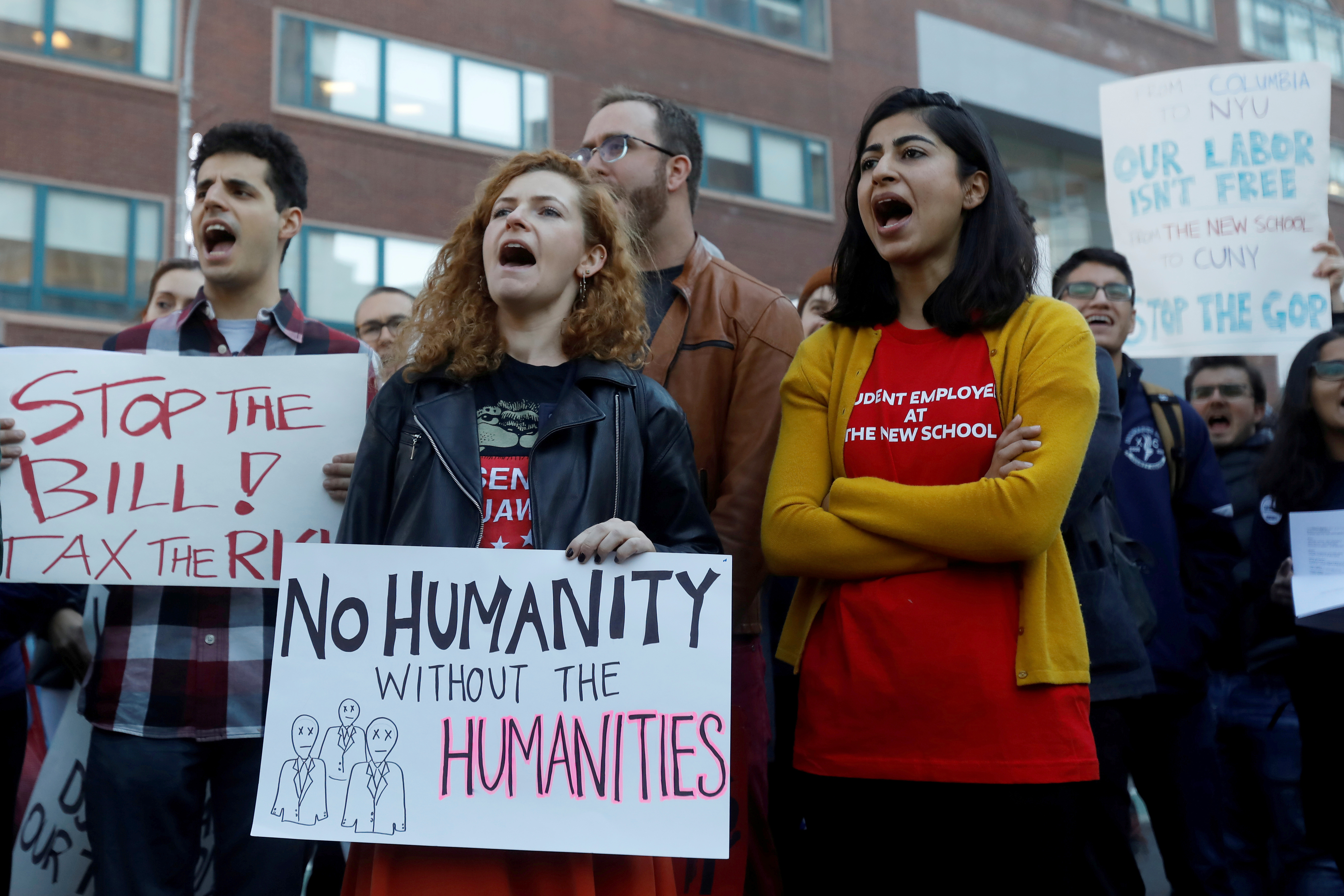 Graduate students rally against the proposed federal tax reform bill Nov. 29 in the Manhattan borough of New York City. Congress must "fix the fundamental flaws" in both the Senate and House versions of the tax bill as lawmakers try to reach an agreement on a final bill, said the chairman of the U.S. bishops' domestic policy committee. (CNS/Reuters/Shannon Stapleton)

In a new letter to members of Congress, Bishop Frank Dewane of Venice, Florida, outlined a sweeping package of changes in pending tax reform legislation to ensure the final bill is "morally acceptable."

Dewane, chairman of the U.S. bishops' Committee on Domestic Justice and Human Development, also addressed positive aspects of the Tax Cuts and Jobs Act, which members of both houses of Congress continued to hash out Dec. 6 to reconcile their respective measures for a final bill.

A vote on a final version was expected in the House of Representatives and the Senate before Christmas.

Dewane in his Dec. 6 letter reminded Congress that the country has long followed tax policy "that is good for workers, families who welcome life, families who are struggling to reach -- or stay in -- the middle class, and the very poor, (and) has been part of our tax code for years."

"Any modification to these important priorities of our nation should only be made with a clear understanding and concern for the people who may least be able to bear the negative consequences of new policy. For the sake of all people -- but especially those persons we ought, in justice, to prioritize -- Congress should advance a final tax reform bill only if it meets key moral concerns," he said.

The letter called for a reversal of the bill's plan to gradually increase taxes on taxpayers in the lowest income brackets while maintaining tax cuts for higher earners, including the most wealthy.

"No tax reform proposal is acceptable that increases taxes for families struggling to meet their daily needs in order to finance cuts for millionaires and billionaires. The final proposal must be amended to avoid this outcome," Dewane wrote.

He also called for restoring the personal exemption, which has been eliminated in both chambers' version of the reform package. Even with the doubling the standard deduction as included in the legislation, families with more than three children would be penalized, leaving them financially worse off, he said.

While lauding the elimination of the marriage penalty under the child tax credit for low-income working families, Dewane called for removing the bill's requirement that taxpayers provide Social Security numbers to claim the credit. Such a requirement would harm immigrant families, he said.

Dewane urged lawmakers to pass a final bill that does not include a Senate provision that eliminates the Affordable Care Act individual mandate requiring people to purchase of health insurance or face a penalty. He said dropping the mandate would lead to millions of people becoming uninsured and that the issue would better be addressed in broader comprehensive approach to health care policy.

The letter welcomed the legislation's bid to double the standard deduction, saying it should be retained. He called the plan "a positive change that will help some families, including many facing economic challenges, avoid tax liability."

However, other provisions of the House and Senate bills were cited in the letter for their negative impact on low-income taxpayers. The letter called for:

-- Retaining the adoption assistance incentive for employers; the provision was eliminated in the House bill, but remained in the Senate.

-- Ensuring that employer incentives for paid family and medical leave do not end in 2019.

-- Adopting an "above-the-line" charitable deduction that would be available to all taxpayers, whether they itemize on tax returns or not to encourage charitable giving.

-- Restoring provisions that were cut in the House bill that assist working families such as the Work Opportunity Tax Credit, a credit for people who retire on disability, and deductions for tuition and student loans, state and local taxes, employee business expenses and moving expenses; restoring other provisions cut in the Senate bill including deductions for union dues and expenses, clothing and uniforms and work-related education.

-- Retaining the housing credit and housing bonds that support development of low-income housing and calling for additional measures so that both the credit and bonds are not significantly devalued because of the lower corporate tax rate, restricting such projects.

-- Adding a plan for the creation of "opportunity zones" for struggling communities.

-- Leaving in place the current alternative minimum tax and estate tax "to ensure that the risks taken in tax reform fall on those who stand to benefit most rather than on those who struggle on the margins of society."