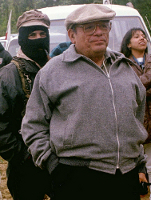 To remember the life of Bishop Samuel Ruiz García, who passed away Monday at 86, we present a special feature from the NCR archives. On the eve of his retirement as bishop of San Cristóbal de Las Casas in the highlands of southern Mexico, Ruiz spoke with the late NCR writer Gary MacEoin.

Below is the full article MacEoin wrote for the Dec. 10, 1999, issue of NCR, which touches on Ruiz's image of an indigenous church.

For more information on Ruiz's life, see Bishop Ruiz, champion of indigenous, dies and look for another special feature from the NCR archives tomorrow.

MILWAUKEE -- Samuel Ruiz, for 40 years bishop of San Cristóbal de Las Casas in the highlands of southern Mexico, has reached the retirement age of 75. He is open, friendly, relaxed, unimpressed by his own erudition, dreaming ambitious dreams and confident that they will become true.

His overarching dream, one that he has to an impressive extent made a reality, is that the indigenous people of his diocese, more than a million native Americans speaking half a dozen Mayan languages, long powerless and voiceless, take control of their lives and find ways to express their Christian beliefs in forms that are meaningful within their culture.

Don Samuel is internationally famous for his role as mediator and peacemaker in the conflict, now in its sixth year, between the Zapatistas and the Mexican government. But as became clear in a recent talk with NCR, this work was always subordinate to and a logical extension of his commitment to a full inculturation of the Christian message in the Mayan world.

In a recent interview during the Nov. 5-7 Call to Action conference in Milwaukee, he made it clear that his vision of a “priesthood of the culture” included the ultimate accommodation of Mayan culture – a priesthood shared by a married couple, the traditional civil and religious leaders in Mayan villages.

As far back as the Vatican Council (1962-65) Ruiz was already deeply involved in exploring the theological need to find ways of expressing Christ’s message in cultural forms other than those of Europe. In this area he is fully at home, ranging volubly through theology, history, anthropology. But what really identifies Ruiz is a genius for storytelling that brings theory down to practice, as in this one:

Try to imagine the trauma of the indigenous priest who told me his experience. “Three or four days after I entered the seminary,” he said, “the rector asked me if I had a woman somewhere round here. Then he began to tear up the ground as if he was about to plant a tree. I took the spade. With my cassock hitched up to my belt, I asked if I should continue to dig.

“ ‘We’re not going to plant a tree. Put your Indian complexes here, turn the earth on top of them, and be the same as the rest of us.’

“I set out seriously, however, to relearn my own language and to reassimilate my culture until one day they come and say to me: ‘Father, we now understand that this brother really wants to live with us.’ Then, about a week later, I hear the music of the village band coming toward the priest’s house. What’s going on? I thought. There is no saint’s day, no festivity. What can it be? It’s not my feast day. Where are they going? By now I can see the municipal president followed by all the people and the musicians.

‘Nothing special, just to let you know that we are happy, because you are now a true Indian, and you are telling us and we know that you want to live with us.’

“And the municipal president steps forward. ‘Just to make it formal, here is my daughter to marry you.’

You can imagine the psychological journey of these people.

The priest laughed: “And she wasn’t particularly good-looking.”

It is a story that takes a lot of decoding. The mestizo rector introduces the listener to the historically conditioned mentality of those who centuries ago entered the world of the conquerors as their servants and are now the cattle barons, the businessmen and the politicians of Mexico, those who think they alone are entitled to be called Mexicans. For them the “Indian” had long been a stereotype, one who has first to be civilized in order to function in society. The seminarian, who from childhood had learned to bow his head and do what he is told, went along. But finally, and this is the great contemporary awakening in the continent, he recognized that his own culture had values. He wanted to go back. And at that point he ran into the stone wall of his people’s understanding of leadership.

Ruiz believes that this is the challenge the church has to confront if it is to become the church of the Mayans and of the vast majority of humans who are not part of the culture of Europe. “We can go on having indigenous who are ordained priests by passing through the process of deculturation we call seminaries. We already have some such priests. But they are mestizo priests, not indigenous priests.”

The reason? “In all indigenous communities in the American continent from Alaska to Patagonia, human maturity is measured, not by years, but by the experience the individual has lived in the smallest social structure, the family. How, [indigenous groups] say, can a person who lacks the experience of guiding, leading and living in a family possibly speak to an entire community?”

Service is thus the critical element in the formation of the religious and spiritual leader. He or she begins with the most modest cargo, as a candle bearer or a flag carrier in the celebration of the saint’s day or other social function. It takes many years and many cargos to merit the role of presider. To reach that level, one must be married, and the role becomes that of the couple, of husband and wife. The logic is a priesthood in which husband and wife together preside at the Eucharist.

“We have not got there yet,” Ruiz says. “But we are moving. Thanks to [the late] Ecuadorian Bishop Leónidas Proaño, in many parishes of the Riobamba diocese, instead of a priest, we have a family -- husband and wife -- who are the pastors.”

Within the present canonical structures, Ruiz has been able to develop rituals for the other sacraments more in tune with Mayan culture than those imported from Europe. “In the diocese we have some 8,000 indigenous catechists, 311 of whom have been ordained deacons. They have for many years been studying ways to express the values of their culture in the Christian faith. One of the first results has been that all the sacraments have begun to acquire new meaning within our life as Christians, to assume a communitarian dimension. The first Communions of ‘my child’ stopped. Instead we have a community celebration. Baptisms similarly have become a community ritual. The entire community gets involved. It takes responsibility for deciding if the parents and godparents are living a Christian life and understand what baptism really means. This process may take three months, perhaps as much as a year when the parents have had little contact with the church.

“Reflection on the meaning of the sacrament of matrimony has produced unsuspected results. I remember being present in a women’s group. ‘In the past,’ they were saying, ‘my father and mother sold me. They waited until they had the needed quantity of wood or meat or whatever in order to give me to the family that was interested. And they didn’t even ask me if I liked the young man or not.’

“So we have here a process of liberation. And they are looking for ways to express their new understanding. It’s not easy, because their culture was so totally crushed. But they are making progress. We are well on our way to creating a ceremony that will incorporate the rituals demanded by tradition (la costumbre), those of the church, and those required by civil law.

“Already we have recovered the communitarian vision. For example, a Marist brother who worked in the diocese decided to leave his religious congregation and marry. He told the community in which he was working of his intention, adding that he would like to continue his work with them. ‘What about her?’ they asked him. ‘Is she also ready to live with us?’ She agreed to follow the process they had established, and the indigenous catechists put her through a 3-month preparation that her intended husband had taught them. They continued to work in that community for several years.”

In Mayan culture, leadership traditionally is held by a married couple who have proven themselves worthy by their service to the community over a period of years. Their proven ability to take care of their own family also shows them worthy to take responsibility for the entire community. It is the couple who presides over the annual festival in each Mayan village. In Mayan culture there is no distinction between civil and religious leadership.

NCR asked Ruiz if the Mayan cultural understanding of spiritual leadership, then, does not logically lead to a liturgy in which the married couple, the husband and wife, are the “priest,” the ones who preside at the celebration of the Eucharist. Ruiz replied unhesitatingly: “That is what we are talking about. That is what is on the table: a priesthood according to the culture.

“The principle that the gospel has to be incarnated in every culture is unchallenged,” he insists, “as is its theological basis. The Vatican Council was clear about it, as were the bishops of Latin America at their meetings at Medellín, [Colombia]; Puebla, [Mexico]; and Santo Domingo, [Dominican Republic]. And Pope John Paul returned to it several times, for example [in Mexico] at Oaxaca, Yucatán and Mexico City. The road is open, wide open.”

[Gary MacEoin authored The People’s Church: Samuel Ruiz of Mexico and Why He Matters. This article originally appeared in the Dec. 10, 1999 issue of NCR with the headline "Seeking Mayan means of expressing Christianity."]