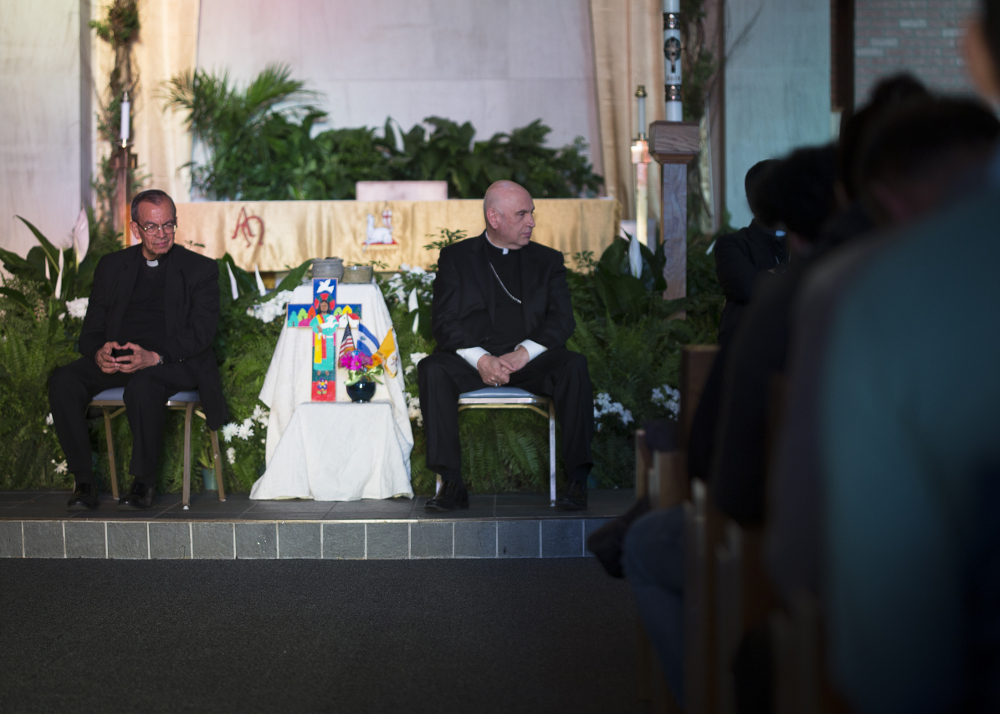 Auxiliary Bishop Mario Dorsonville of Washington called on Congress to adopt legislation that would protect "Dreamers" and those covered by temporary protected status and Deferred Enforced Departure so that families are kept intact.

Testifying before the House Judiciary Committee March 6, the bishop said such measures were necessary to uphold the dignity of immigrants, whom he described as "children of God."

Dorsonville, who will become chairman of the U.S. bishops' Committee on Migration in November, said the Catholic Church would continue to assist and advocate on behalf of immigrants and refugees fleeing violence, poverty and the effects of natural disasters in their homeland.

"Our work ... stems from the belief that every person is created in God's image," he said of programs operated through various Catholic agencies and parishes. "We follow the teaching of the Gospel, and in his own life and work, Jesus identified himself with newcomers and with other marginalized persons in a special way: 'I was a stranger and you welcomed me.'

"Dreamers, and TPS and DED holders are our neighbors, parishioners, and, most importantly, fellow children of God," he said.

In addition to the bishop, the House committee heard from temporary protected status holders and Dreamers, young adults who were brought to the U.S. illegally as children and remain in the country under the Deferred Action for Childhood Arrivals. The program primarily benefits young people from Mexico and Central America.

The "Dreamer" name comes from the DREAM Act, the Development, Relief, and Education for Alien Minors Act, a bipartisan proposal outlining several provisions to qualify these young people for permanent residency.

President Donald Trump in 2017 announced that DACA would end, but a federal appeals court in California blocked the order in November, allowing the program to remain in place. The U.S. bishops called the president's original order reprehensible.

At the time he issued the order, Trump challenged Congress to take action and pass a replacement before it was to be phased out. Last year he said that "DACA was dead because the Democrats didn't care or act" to save it.

In addition, the Department of Homeland Security has filed notice that it was extending temporary protected status for foreign nationals from El Salvador, Nicaragua, Haiti and Sudan until Jan. 2, 2020. The notice, published in the Federal Register March 1, said the extension came in response to a preliminary injunction issued by U.S. District Court for the Northern District of California in a lawsuit challenging plans to end the special status for migrants from the four countries.

In his testimony, Dorsonville said ending the temporary protected status designations for many countries, including Haiti, Honduras, Nicaragua and El Salvador, has concerned the U.S. Conference of Catholic Bishops. The possibility of ending the designation has left some 320,000 status holders facing dire questions over family separation "if Congress does not act," he said.

"TPS holders need a permanent legal solution that only the Congress and the president, working together, can provide," he said.

"Given the large number of U.S. citizen children who have TPS-holder parents, we must think about what termination of TPS would do to these families," Dorsonville explained.

"What types of choices would these families have to make? Would families endure separation of parents living apart from their children in order to ensure U.S. citizens receive the educational opportunities in the United States to which they are entitled? These are questions that we as the church are facing, and, more importantly, TPS holders and their families are grappling with every day," he added.

In concluding, Dorsonville repeated his call that Congress "works toward a humane and just solution for these vital members of our communities."

"As always," he said, "the Catholic Church stands ready to work with you in achieving this goal and will continue to stand in solidarity with Dreamers, TPS holders and their families."