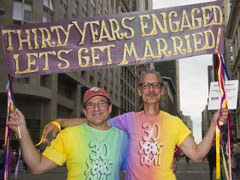 For the U.S. bishops’ conference, it’s a “profoundly unjust law.”

But Catholic gay and lesbian couples say New York’s passage of legislation to allow same-sex marriage is recognition that their families are “just like other families” across the country.

The legislation, passed by a narrow 33-29 margin in the State Senate June 24, was signed into law that night by New York Gov. Andrew Cuomo, a Catholic. Unless delayed by legal challenges, it will take effect in late July.

New York would then become the sixth state to permit same-sex marriage, following Connecticut, Iowa, Massachusetts, New Hampshire and Vermont, in addition to the District of Columbia.

Passage of the law sparked immediate disapproval from bishops across the country.

The New York bishops released a statement June 24 saying they were “deeply disappointed and troubled” at approval of a bill that will “alter radically and forever humanity’s historic understanding of marriage.”

Writing on behalf of the U.S. bishops’ conference in a press release June 28, Bishop Salvatore Cordileone of Oakland, Calif., said the law would create “an institutional and cultural crisis with generational ramifications yet to be seen.”

“As demonstrated in other states where a marriage redefinition has occurred, officials [in New York] will be in a position to retaliate against those who continue to uphold … basic truths,” wrote Cordileone, who is the head of the bishops’ subcommittee for the promotion and the defense of marriage. “This is a mark of a profoundly unjust law.”

New York’s decision will not redefine the “cornerstones of civilization,” DeBernardo said. “It’s very much in line with our civilization’s recognition of justice.”

In a second letter on the issue released June 25, the New York bishops disputed the argument that gay marriage is a civil rights issue.

“Today’s debate focuses on a small group of persons, whose human rights must always be respected and defended by us all, but who claim a civil right to redefine marriage for all of society based on a private and personal preference,” the bishops wrote.

Phil Attey, executive director of Catholics for Equality, however, said laws like the one passed in New York strengthen all families, because denying rights to lesbian, gay, bisexual and transgender people rips families apart.

Catholics for Equality identifies itself as a political group and only advocates for same-sex marriage in the civil sector.

A last-minute amendment to the New York law exempts any clergy members who decline to perform same-sex weddings and any employee “being managed, directed or supervised by or in conjunction with a religious corporation, benevolent order or a not-for-profit corporation.”

It also says failure to provide same-sex ceremonies would not “result in any state or local government action to penalize, withhold benefits, or discriminate against such religious corporation, benevolent order, a not-for-profit corporation operated, supervised or controlled by a religious corporation.”

The spokeswoman for the U.S. bishops’ conference told NCR that opposition to gay marriage will remain a “high priority” for the bishops.

“The defense of the traditional understanding of marriage is key to our understanding of a major unit of society,” Mercy Sr. Mary Ann Walsh said. “[The New York vote] just makes it more important.”

Referring to the fact that New York’s new law was passed through the legislature, and not voted on in a referendum, Walsh also said passage of the law “strengthens the resolve of the bishops” to oppose gay marriage initiatives elsewhere.

The bishops demonstrated that resolve at their June semiannual meeting in Washington state, Walsh said, when they promoted Cordileone’s committee from ad hoc committee to a subcommittee inside the bishops’ Office of Laity, Marriage, Family and Youth.

Advocates say the success of the law in New York may show that the bishops, and other opponents of gay marriage, will be fighting an uphill battle.

Attey noted that the vote in New York, whose population of more than 19 million is estimated to be 40 percent Catholic, “shows that in a heavily Catholic state you can move forward with LGBT measures.”

For Casey Lopata, the focus is to have church officials understand the struggles — and successes — of gay families. Lopata and his wife, Mary Ellen, are cofounders of a Catholic support group for parents of gay and lesbian children called Fortunate Families, which offers counseling, retreats and days of reflection for parents of LGBT children. They started the group in 2004 after their son came out as a gay man.

“I think the best thing the bishops could do, if they’re willing to do it, is have listening sessions with parents of LGBT daughters and sons, and gay and lesbian people who are parents themselves,” Lopata said.

“The bishops would see that these are everyday people just like other Catholics,” he said. “They have to experience that these are true families, and as much family as my wife and I and our family.”

The New York bishops noted in their June 24 statement that they “strongly uphold the Catholic church’s clear teaching that we always treat our homosexual brothers and sisters with respect, dignity and love.

“But we just as strongly affirm that marriage is the joining of one man and one woman in a lifelong, loving union that is open to children, ordered for the good of those children and the spouses themselves.”

[Joshua McElwee is an NCR staff writer and Zoe Ryan is an NCR intern. CNS also contributed to this report.]