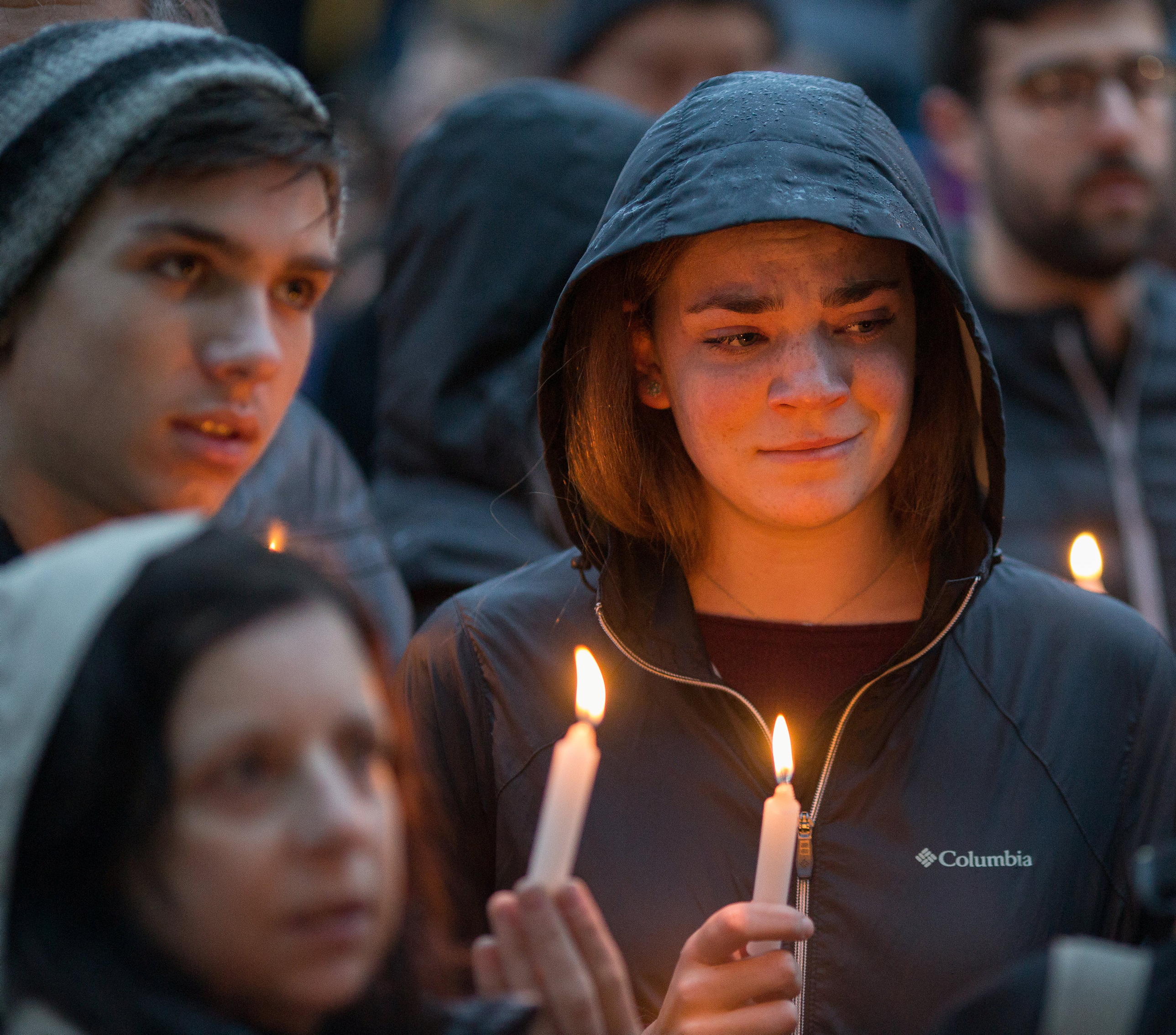 People mourn during a candlelight vigil Oct. 27 for victims of the shooting that killed eleven people at the Tree of Life Synagogue in Pittsburgh. Robert Bowers opened fire that morning during a service at the synagogue, also wounding at least six others, including four police officers, authorities said. (CNS/Reuters/John Altdorfer)

The U.S. Catholic bishops stand with "our brothers and sisters of the Jewish community," the president of the U.S. Conference of Catholic Bishops said Oct. 27 after a horrific shooting earlier that day in Pittsburgh at the Tree of Life Synagogue, described as a hub of Jewish life in that city.

The shooting occurred during a morning baby-naming ceremony, for which an estimated crowd of 45 to 100 people had gathered, according to news reports. There were 11 fatalities, all adults. Six others were injured, including four members of law enforcement.

"We condemn all acts of violence and hate and yet again, call on our nation and public officials to confront the plague of gun violence," said Cardinal Daniel DiNardo of Galveston-Houston.

"Violence as a response to political, racial or religious differences must be confronted with all possible effort. God asks nothing less of us," he said. "He begs us back to our common humanity as his sons and daughters."

At the Vatican Oct. 28, Pope Francis prayed for those affected by the deadly attack, calling it an "inhumane act of violence." "May the Lord help us extinguish the fires of hatred that develop in our society," the pope prayed after reciting the Angelus prayer.

The gunman, later identified as a 46-year-old Pittsburgh man named Robert Bowers, allegedly shouted that "all Jews must die" as he stormed the synagogue in the Squirrel Hill section of the city. Once inside he began shooting. Police said he was armed with three handguns and an AR-15 "style" weapon. He is believed to have acted alone.

In Pittsburgh, Special Agent Robert Jones, who heads the FBI's field office there, said Oct. 28 that Bowers was formally taken into federal custody the previous night. He has been charged with 29 separate federal crimes, including hate crimes and weapons offenses. Jones said 22 of the counts are "punishable by death."

"We will spare no effort or resource to make sure the defendant is held fully accountable for his unspeakable crimes," Jones said at an early morning news conference.

Bowers was apprehended by local law enforcement after exchanging gunfire with police outside the synagogue, following his shooting spree inside.

He was hospitalized for injuries he sustained, which required surgery, according to Jones. He said Bowers remained in the hospital in fair condition and was under guard. The alleged shooter was expected to go before a federal magistrate the afternoon of Oct. 29.

Reuters reported that a post on social media later identified as coming from Bowers said: "I can't sit by and watch my people get slaughtered. Screw your optics, I'm going in." Shortly before the shooting it had been posted on Gab, a Philadelphia-based social networking service described as an alternative to Twitter. In a statement, Gab.com confirmed the poster's profile belonged to Bowers.

In his statement, DiNardo, who was ordained as a priest for the Diocese of Pittsburgh, said: "I commend to our Lord the victims, including first responders, and the consolation of their families. May Almighty God be with them and bring them comfort at this tragic time."

Pittsburgh Bishop David Zubik denounced the shooting and said the entire Pittsburgh community is devastated. The relationship between the Catholic diocese and the synagogue, he said, has been "close over many years."

In a statement to the media, he said: "May God free us from fear and hatred, and sow peace in our lives, our communities and in the world. ... My heart and prayers are especially lifted up for our Jewish sisters and brothers and the law enforcement officers who rushed into harm's way."

Prayer, loving one's neighbor and working to end bigotry must be the response to the hatred shown by the shooting, he said.

"Anti-Jewish bigotry, and all religious and ethnic bigotry, is a terrible sin," he said. "As we pray for peace in our communities and comfort for the grieving, we must put prayer into action by loving our neighbors and working to make 'Never again!' a reality."

The chairman of the USCCB Committee for Ecumenism and Interreligious Affairs called the attack is "a cowardly act" that must "be condemned by all Americans."

"Those killed and injured represent the best of who we are: people of faith gathered to pray and celebrate the birth of a child and officers responding to the ensuring violence with no concern for their own safety," Bishop Joseph Bambera of Scranton, Pennsylvania, said in a statement Oct. 28.

He said the committee "stands with our Jewish brothers and sisters during this time of great distress. May God grant peace to the dead, healing to the injured, and comfort to the families of those hurt and killed and to all the Jewish community.”

President Donald Trump addressed the shooting as he was leaving Washington for a rally in the Midwest Oct. 27 and again at the rally, which he said had considered canceling because of the horrific shooting. He said he and the entire nation were "stunned and shocked by the unleashing of such terrible violence during a baby-naming ceremony."

He called it "pure evil" and a "wicked act" of anti-Semitism. The "widespread persecution of Jews ... must be condemned and confronted anywhere it appears," Trump said. "There must be no tolerance for religious or racial hatred or prejudice."

Among reaction of religious leaders around the country was a statement from the leaders of Faith in Action, formerly the PICO National Network, who also condemned the shooting and the "hate-fueled rhetoric" that led to the violence.

The Rev. Alvin Herring, executive director, blamed the Trump administration: "Since day one, the current administration has cultivated a culture of hate and fear, using dangerous rhetoric that gives cover to violent actors. As people of faith, we are called to work in opposition to the administration's attempt to disconnect us from one another in their effort to retain power."

However, an Oct. 27 profile of Bowers by The New York Times said that in addition to frequently reposting "anti-Semitic content that alleged Jews control the nation," the alleged shooter also "extended his anger to the president, whom he accused of not going far enough to achieve the political goals Bowers wanted."

"Days before the shooting, he wrote: 'Trump is a globalist, not a nationalist. There is no #MAGA as long as there is 'a -- he inserted a slur for Jews -- infestation.'"

Reuters had reported that a post on social media later identified as coming from Bowers said: "I can't sit by and watch my people get slaughtered. Screw your optics, I'm going in." Shortly before the shooting it had been posted on Gab, a Philadelphia-based social networking service described as an alternative to Twitter. In a statement, Gab.com confirmed the poster's profile belonged to Bowers.

Faith in Action also blamed Trump's rhetoric for the Oct. 24 shooting of two black shoppers at a Kroger's near Louisville, Kentucky, the news of which has been eclipsed by the synagogue massacre.

A white man, Gregory Bush, 51, has been charged with murder and other crimes. News reports said authorities were investigating whether his motivation was racial based on a bystander saying that in a brief conversation in the parking lot the alleged shooter supposedly stated: "Don't shoot me. I won't shoot you. Whites don't shoot whites."

About the synagogue shooting, David Harris, CEO of the American Jewish Committee, said: "The callousness of a bigoted individual intent on destroying innocent lives in a house of worship should unite Americans in anger and determination to confront the toxic hatred and extremism in our country."

"Words cannot adequately express my sorrow at this morning's horrific massacre at Tree of Life synagogue in Pittsburgh," another Pennsylvania bishop, Greensburg Bishop Edward Malesic, said Oct. 27. "I am absolutely heartbroken at yet another senseless act of gun violence perpetrated on holy ground."

He said his prayers and those of the entire diocese go out to those killed and injured, "including the first responders who risked their lives trying to save others. We will also pray for the loved ones of these victims and for all of our brothers and sisters in the Jewish community."

"People of faith should be able to worship God in peace and security. Our sacred places should be free of all violence," Malesic said. "May we find a way to respect the lives of one another without resorting to such brutality. We will continue to work for an end to hatred and bigotry of any kind."

Bishop Paul Bradley of Kalamazoo, Michigan, who was an auxiliary bishop in Pittsburgh from 2004 to 2009, weighed in on Twitter: "In the face of the awful tragedy in a Pittsburgh synagogue ... let us once more pray that God will take those killed into his merciful arms and grant them eternal rest. Let there be peace in the world and in our hearts."