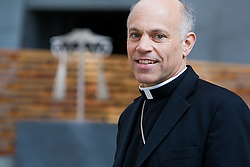 Bishop Salvatore J. Cordileone of Oakland, Calif., has been named to head the Archdiocese of San Francisco. (CNS/Greg Tarczynski)

Bishop Salvatore Cordileone, chairman of the U.S. bishops' committee tasked with opposing the legalization of same-sex marriage and until Friday the bishop of Oakland, Calif., has been appointed the archbishop of San Francisco.

Archbishop Carlo Maria Vigano, apostolic nuncio to the United States, announced the appointment Friday in Washington, at the same time announcing the resignation of the previous head of the San Francisco archdiocese, Archbishop George Niederauer.

Niederauer, 76, led the San Francisco Archdiocese since 2005. A priest of the Los Angeles archdiocese, he also served as bishop of Salt Lake City for 10 years. Cordileone, a 56-year-old native of San Diego, was an auxiliary bishop in that diocese from 2002 until his 2009 appointment as bishop of Oakland.

Following the initial announcement of Cordileone's appointment, the San Francisco archdiocese held a short press briefing Friday at which Niederauer introduced Cordileone, saying he knows the new archbishop as "energetic, hardworking and faithful to God's people."

Niederauer also announced that Cordileone would be officially installed in his new role Oct. 4, the feast day of St. Francis of Assisi, for whom San Francisco is named.

During his remarks at the press briefing, which was streamed live online, Cordileone said he was "humbled by the confidence that Pope Benedict has placed in me" in giving him the new role.

Cordileone also said he had "regret" that his time in the Oakland diocese was "so brief," and he hoped that in his new appointment "we will together be able to further the new evangelization in this corner of the world we call home." Cordileone also repeated his remarks in Spanish.

Cordileone has also served as the chairman of the U.S. Bishops' Subcommittee for the Promotion and Defense of Marriage since 2011.

In a statement at the time of his appointment, Cordileone said, "How well we as a society protect and promote marriage and the family is the measure of how well we stand for the inviolable dignity and good of every individual in our society, without exception."

Several questions from members of the media following Cordileone's remarks focused on the bishop's opposition to gay marriage.

When asked about his stance on Proposition 8, a 2008 California ballot measure that defined marriage as between a man and a woman, Cordileone described marriage as a "foundational good" and said strengthening marriage "is a benefit for everyone in society."

"One of the cultural challenges all throughout the west, and including here, certainly is the erosion of family life, the break-up of families, children growing up without their parents, especially without their fathers, abuse in the home," he said. "These are cultural moral challenges that we have to confront."

During his time at the Oakland diocese, Cordileone conducted a more-than-yearlong investigation into a national group based in the diocese that ministers to gay and lesbian Catholics, saying he wanted he wanted to investigate the group's "adherence to the fullness of Catholic teaching."

Cordileone also mandated that the board members of the group, known as the Catholic Association for Lesbian and Gay Ministry, sign an "oath of personal integrity" to Catholic teaching.

As of June, the group had refused to sign the oath following months of discussion on the matter.

Editor's note: See below for the San Francisco archdiocese's press briefing, which saw brief remarks from Cordileone before questions from press.