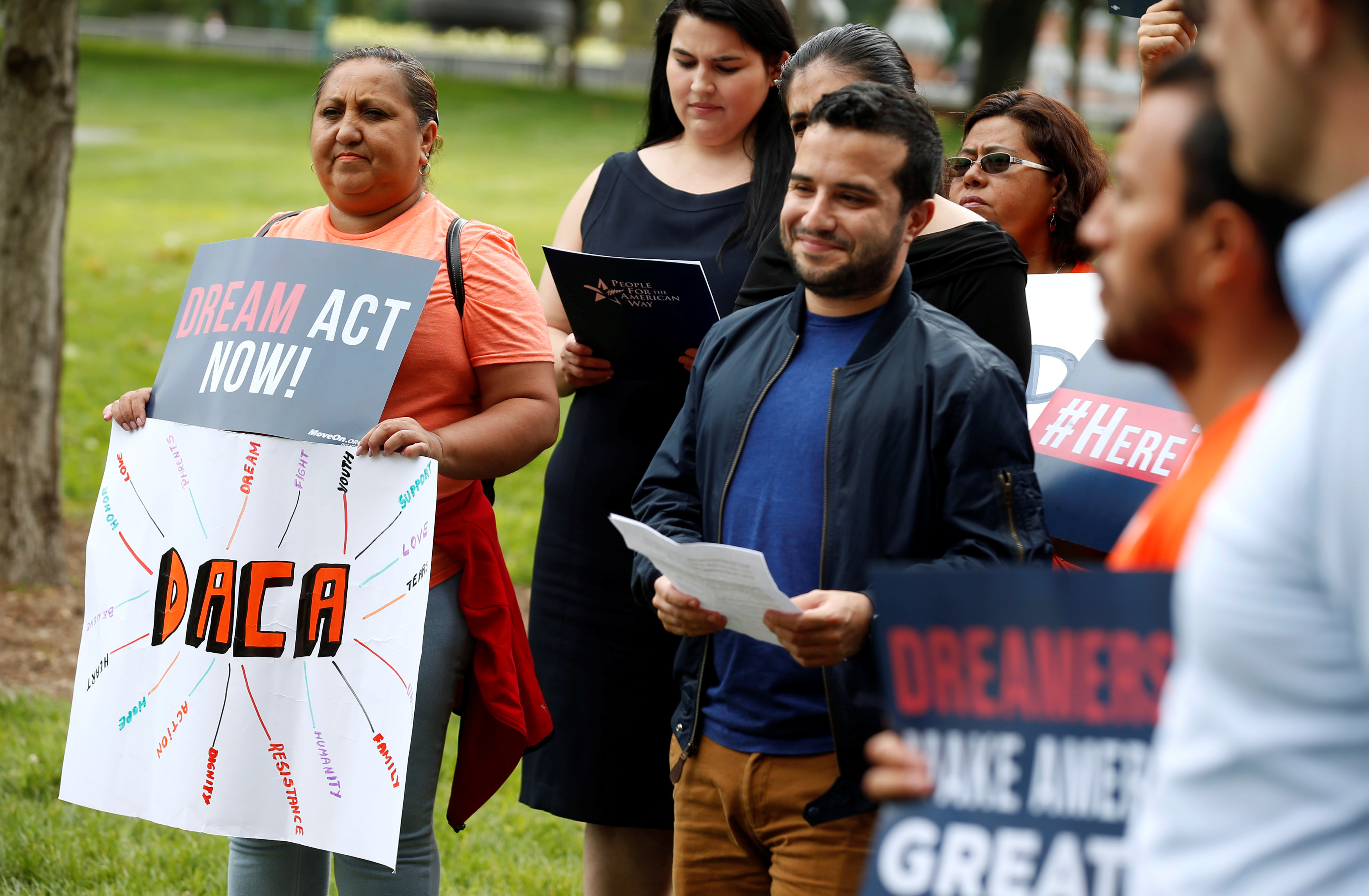 Immigration activists and those enrolled in the Deferred Action for Childhood Arrivals program, or DACA, take part in a rally Sept. 12 in Washington to urge Congress to pass the DREAM Act. (CNS/Reuters/Joshua Roberts)

A top U.S. bishops' committee urged the U.S. Department of Homeland Security to extend the renewal deadline for those covered by the Deferred Action for Childhood Arrivals program who live in Texas and Florida, where communities have been hit hard by massive hurricanes.

Instituted by President Barack Obama in 2012, DACA allows some 800,000 young people brought to the United States illegally as children to stay in the country and work or go to school. The Trump administration announced Sept. 5 the program would end in six months if Congress does not pass legislation to make the program permanent.

In a Sept. 12 statement, the Executive Committee of the U.S. Conference of Catholic Bishops called for an extension of the deadline for current DACA beneficiaries in Texas and Florida who must renew their status between Oct. 5 of this year and March 5, 2018.

The committee, which includes the officers of the USCCB, also urged Congress to find "a durable and permanent solution on behalf of DACA youth" and in the same statement urged the Trump administration to allow 75,000 refugees into the United States in 2018, instead of admitting only 50,000 the government plans to accept.

"In the wake of hurricanes Irma and Harvey and the devastation left behind," the deadline for DACA renewals should be extended, the committee said.

"As Texas and Florida have some of the largest populations of DACA youth, we ask that you ensure that these individuals receive fair access to renew and are not unduly punished due to natural disaster. We fear that they cannot adequately do so at this time given the physical damage on the ground," it said.

The Executive Committee, which met in Washington at USCCB headquarters the week of Sept. 11, said it was making its own a Sept. 5 statement from Cardinal Daniel N. DiNardo of Galveston-Houston, USCCB president, objecting to the Trump administration rescinding DACA. The cardinal called the decision "unacceptable and does not reflect who we are as Americans."

The committee committed the USCCB "to redouble its efforts to help find a permanent legislative solution in Congress" during the "six-month wind-down period" for the program.

It said: "In light of many years of failure by Congress, whether controlled by Republicans or Democrats, to address the situation, the committee urges the Catholic faithful and all people of goodwill to contact their representatives in Congress to urge the passage of the DREAM Act or similar legislation as a prompt, humane, and durable solution to this problem of greatest urgency.

"The Executive Committee also notes the tremendous contributions of the DACA youth to date as extraordinary, including the fact that many serve in our military." 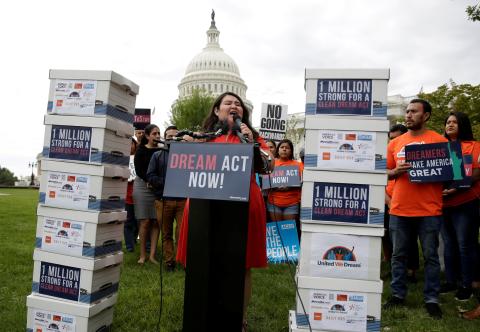 Rosa Martinez, an immigration activist and a recipient of the Deferred Action for Childhood Arrivals program, known as DACA, takes part in a rally Sept. 12 in Washington urging Congress to pass the DREAM Act. (CNS/Reuters/Joshua Roberts)

The group also said it is "further troubled and deeply concerned" by a decision from President Donald Trump to reduce the number of refugees the United States will admit in 2018.

Trump is nearing "a final decision to reduce the number of refugees welcomed in the United States by 50 percent, (which) will unduly restrict our reception of those in search of safety for their families."

"The USCCB proposes that 75,000 refugees, already a reduction of over 25 percent from the previous determination, be the goal for welcoming refugee admissions for 2018," the statement said. "Going further down to 50,000 or below, as proposed in previous executive orders by the president, is simply inhumane, particularly when our great nation has the resources and ability to do more."

The bishops added: "We implore the administration to show mercy and compassion for those seeking refuge, and to advance the American value of freedom through providing safe harbor to those fleeing tyranny and religious persecution."