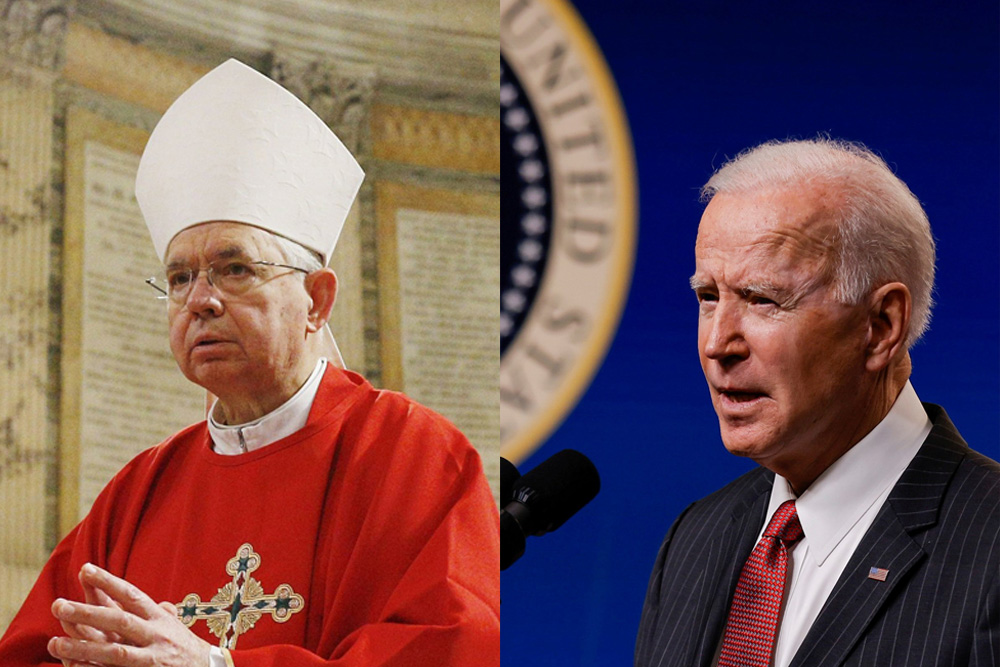 Less than three months after the formation of a controversial working group to deal with President Joe Biden, the nation's Catholic bishops have disbanded the group, which produced a public rupture among the U.S. hierarchy in its approach toward the nation's second Catholic president.

According to two bishops familiar with the process, the work of the group is now complete and the group's proposal to produce a document on the question of Communion will be addressed by the U.S. bishops' Committee on Doctrine.

Chieko Noguchi, a spokeswoman for the U.S. Conference of Catholic Bishops, declined to comment.

The group, originally announced on Nov. 17, met virtually on two occasions. As NCR first reported last month, its 10-person committee did not include Biden's local bishops in Washington, D.C., or his home state of Delaware.

The output of the group was twofold: first, a contentious Inauguration Day statement by bishops' conference president Archbishop José Gomez that enumerated the areas in which Biden's political positions did not match Catholic doctrine, specifically on abortion and LGBTQ issues. The statement was a stark contrast to Pope Francis' message to Biden the same day.

Secondly, the group proposed a document outlining church teaching on the Eucharist, "including the fact that our relationship with Christ is not strictly a private affair." That proposal will now be addressed by the doctrine committee, currently chaired by Bishop Kevin Rhoades of Fort Wayne-South Bend, Indiana.

Rhoades' three-year term will expire in November 2021 and he will be succeeded by Bishop Daniel Flores of Brownsville, Texas.

In recent months, several Catholic bishops have suggested that Biden be denied Communion due to his support for legal abortion.

Archbishop Joseph Naumann, chairman of the U.S. bishops' Committee on Pro-life Activities and a member of the now disbanded working group, used his homily at the annual National Prayer Vigil for Life to make such a case.

"Sadly, President Biden is the perfect example of the religiously and ethically incoherent straddle: claiming to believe that human life begins at conception and personally opposing abortion, while doing everything within his power to promote and institutionalize abortion not only in the USA but also around the world," said Naumann, who is archbishop of Kansas City, Kansas.

He then went on to discuss Communion: "In effect, our Amen when receiving Our Lord is an affirmation that we believe and profess all that the Holy Catholic Church believes, teaches and proclaims to be revealed by God," Naumann said. "We do not want a non-Catholic Christian to profess something that they do not believe. Similarly, integrity requires a Catholic not receive the Eucharist while acting in a manner incoherent with fundamental Catholic teaching."

San Francisco's Archbishop Salvatore Cordileone, another member of the working group, has also recently argued that denial of Communion makes "sense to a lot of people. We need to reclaim this sense of what it means to receive [Communion]."

By contrast, other bishops have warned against such a position.

Cardinal Wilton Gregory of Washington has said he will not refuse Biden Communion, saying, "I don't want to go to the table with a gun on the table first," and that he wanted to dialogue with the new president.

In a newly aired interview with NBC News, Gregory characterized Gomez's Inauguration Day statement as "ill-timed." While he said there would be times when he and Biden disagreed, he hoped their relationship would be marked by dialogue.

During a panel earlier this month hosted by Georgetown University's Initiative on Catholic Social Thought and Public Life, Bishop Robert McElroy of San Diego cautioned against the "weaponization of Eucharist."

"I do not see how depriving the president or other political leaders of Eucharist based on their public policy stance can be interpreted in our society as anything other than the weaponization of Eucharist and an effort not to convince people by argument and by dialogue and by reason, but, rather, to pummel them into submission on the issue," McElroy said.

Following the U.S. bishops' Inauguration Day statement, Chicago Cardinal Blase Cupich, one of the pope's principal collaborators in the U.S. church, called the statement "ill-considered" and said it represented "internal institutional failures" that "must be addressed." While some Catholic commentators predicted that Cupich breaking ranks with the leadership of the U.S. bishops' conference would be viewed poorly in Rome, on Jan. 30, Francis held a public audience with Cupich in Rome, one widely viewed as a sign that the pope supported Cupich's approach.

Biden, a regular Massgoer, has attended church regularly since his inauguration.

This story appears in the Bishops, Biden and Communion feature series. View the full series.
A version of this story appeared in the March 5-18, 2021 print issue under the headline: Bishops' working group on Biden disbanded.