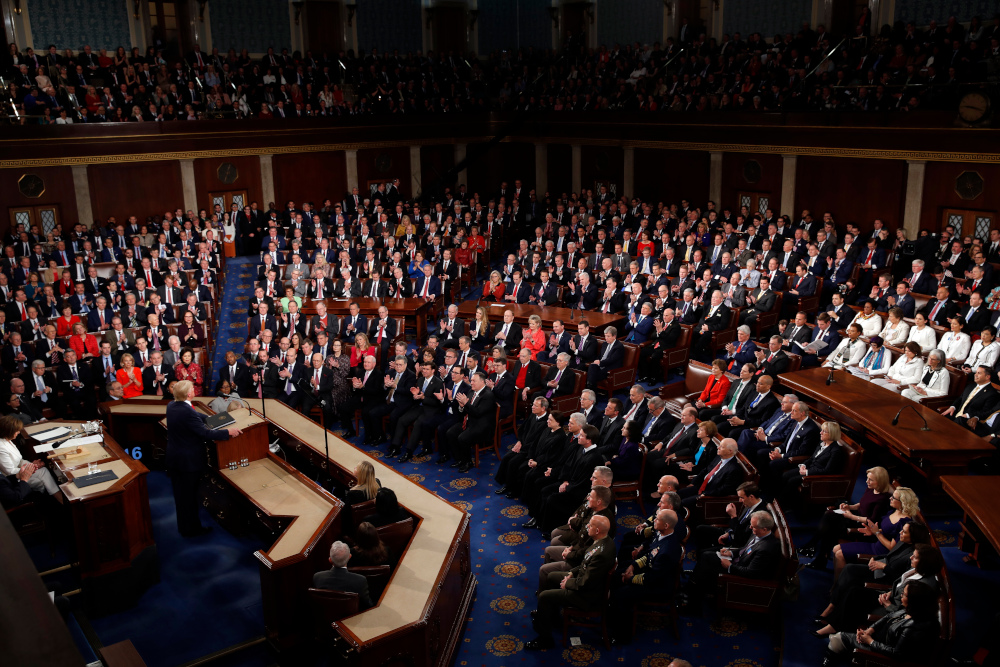 President Donald Trump delivers his State of the Union address to a joint session of Congress on Capitol Hill in Washington, Tuesday, Feb. 4, 2020. (AP/J. Scott Applewhite)

President Donald Trump delivered a State of the Union address peppered with religious references and ideas on Feb. 4 evening, laying out a sweeping vision for the United States that evoked old (and contested) religious ideas and catered directly to conservative Christians who make up his base of support.

The president made several appeals to faith throughout his annual speech to the nation and the U.S. Congress, some of which appear to be targeted at specific demographics. Here are a few.

Trump made a direct appeal to religious conservatives on abortion.

Roughly halfway through his speech, Trump outlined his opposition to abortion through a mixture of story and theology. He pointed out the presence of Ellie Schneider and her mother, Robin, in the crowd, explaining that the 2-year-old Ellie was born premature at just 21 weeks in 2017 — but was saved "through the skill of her doctors and the prayers of her parents."

Her story was framed in two ways: as an argument for granting additional government funding for neonatal research, and against abortion.

"Ellie reminds us that every child is a miracle of life," Trump said, adding that he is asking Congress to pass legislation "finally banning the late-term abortion of babies."

He then invoked the Almighty as a potentially unifying force for lawmakers: "Whether we are Republican, Democrat or independent, surely we must all agree that every human life is a sacred gift from God."

The lines echo his rhetoric in other recent speeches when he referenced abortion, particularly when addressing conservative Christians. In January, he spoke at an evangelical church in Miami to kick off his "Evangelicals for Trump" campaign initiative, repeating his opposition to abortion and declaring to the group of Christian conservatives that he believes "we have God on our side."

A few weeks later, Trump delivered a speech at the March for Life, an annual anti-abortion gathering in Washington, where he told the crowd of thousands, "When we see the image of a baby in the womb, we glimpse the majesty of God's creation."

The president also lifted up what he described as his administration's dedication to religious freedom, including the right to pray in schools.

"My administration is also defending religious liberty, and that includes the constitutional right to pray in public schools," he said. "In America, we don't punish prayer. We don't tear down crosses. We don't ban symbols of faith. We don't muzzle preachers and pastors. In America, we celebrate faith, we cherish religion, we lift our voices in prayer, and we raise our sights to the glory of God."

Advocating for prayer in public schools has long been a hallmark of the religious right, which has spent decades insisting that teachers and administrators should be allowed to lead students in prayer. Despite a series of Supreme Court decisions generally outlawing the practice — including a 2000 decision that banned school districts from sponsoring student-led prayers at football games — a 2019 Pew Research survey found that while orisons in public schools are rare, they still occur: 8% of teenage public school students said they have ever had a teacher lead their class in prayer, a number that rises to 12% in the South.

The issue of religious liberty has become a rallying cry among Christian conservatives in recent years as well, particularly surrounding issues of same-sex marriage, abortion and contraception, which many religious conservatives oppose. The concept has also been invoked by conservative activists who argue that barring faith leaders and groups from formally endorsing candidates — a move that would violate their tax-exempt status — impinges on their religious freedom (or as Trump put it, "muzzles" them). Hence Trump's 2017 executive order "promoting free speech and religious liberty" that curtailed the enforcement of such laws.

That said, Trump's appeal to religious liberty is deeply contested. Many liberals still characterize his travel ban — which was expanded to include six additional countries just last week — as a de facto "Muslim ban," which is exactly what Trump initially proposed during his 2016 campaign for president. 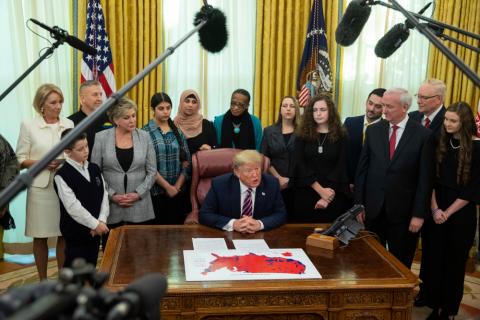 President Donald Trump speaks during an event on prayer in public schools, in the Oval Office of the White House, Thursday, Jan. 16, 2020, in Washington. (AP/ Evan Vucci)

Other critics point to his efforts to limit refugee resettlement, a process that is enacted by a group of mostly faith-based organizations: At least three of those organizations are  suing the Trump administration over a recent executive order granting state and local officials the authority to block refugee resettlement, arguing it violates federal law and "inhibits our ability to freely practice our religion."

Recently, opponents of the administration's crackdown on immigrants say it has violated the religious freedom of many religious activists who fight for immigrant rights — a position that is beginning to pick up traction in the courts.

In November, an Arizona man was acquitted of a misdemeanor charge for leaving water for migrants crossing through a desert wilderness area along the U.S.-Mexico border, insisting he was simply acting on his faith. On Tuesday, four faith-based activists who took similar actions had their convictions overturned by a federal judge who argued that prosecuting them amounted to a violation of their "sincerely held religious beliefs." Meanwhile, a New York City pastor is also  suing the federal government, contending it surveilled and investigated her for doing religious work with immigrants along the U.S.-Mexico border.

Manifest Destiny and the American myth

Near the end of his speech, Trump began to weave an almost mythical version of the United States, interspersing it with religious references in ways that may appeal to a certain subset of voters in an election year.

When making the pitch for increasing funding for space shots to the moon and Mars, Trump insisted that "America has always been a frontier nation," adding, "Now we must embrace the next frontier, America's Manifest Destiny in the stars."

Manifest Destiny is a belief popular in the 19th century that contended it was the "destiny" of the overwhelmingly white, European settlers to expand westward across the United States. It was often framed in religious terms and sometimes included the spread of Christianity, and was widely seen as the theological justification for the systematic subjugation of Native Americans and their lands.

The concept echoes the Doctrine of Discovery, an idea based on papal edicts that offered a justification for the discovery and colonization by European Christians of lands already inhabited by indigenous people.

Trump later recounted a version of American history that frames settlers as religiously inspired "pathfinders," saying, "We settled the New World, we built the modern world, and we changed history forever by embracing the eternal truth that everyone is made equal by the hand of Almighty God."

As he closed out his remarks, the president appealed to the link between God and country.

"The American adventure has only just begun," he said. "Our spirit is still young. The sun is still rising. God's grace is still shining. And my fellow Americans, the best is yet to come."

Although not new, some scholars now describe such rhetoric — as well as his appeals to religious liberty — as a version of "Christian nationalism," an ideology where American identity and Christianity are treated as inextricably knitted together.

The ideologies and theologies surrounding Christian nationalism have been condemned by religious progressives and even some Christian conservatives. But with the president up for reelection, mixing faith and national identity may prove to be a deft political move: Scholars also credit Trump's appeal to Christian nationalism as one of the core reasons for his 2016 election victory, as it proved to be a powerful form of identity politics among many conservative voters.