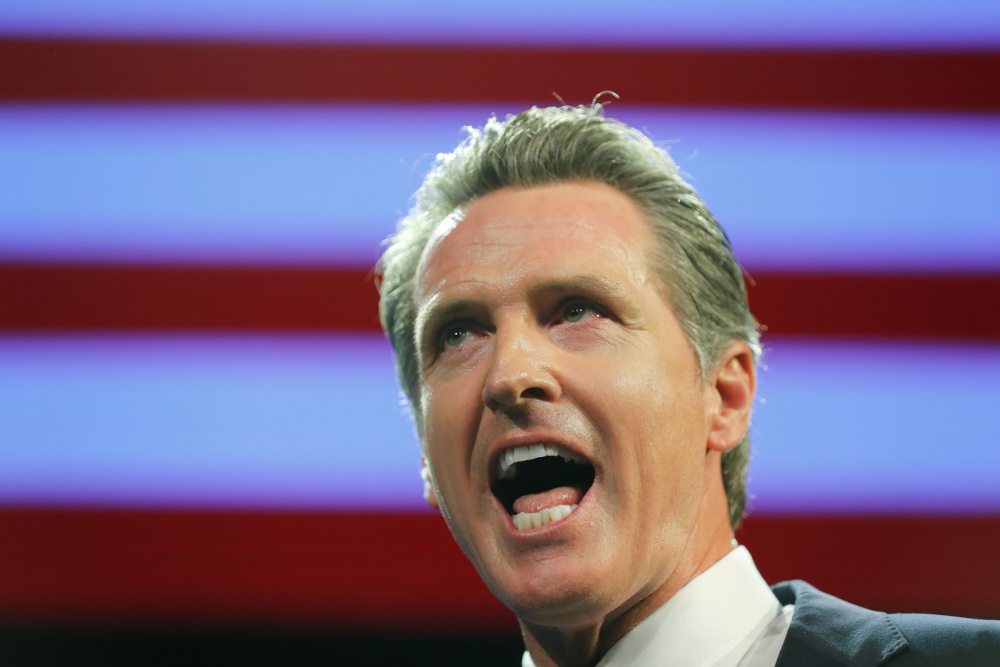 California Gov. Gavin Newsom is pictured in Los Angeles Nov. 6, 2018. He declared a moratorium on the use of the death penalty in the state March 13, 2019. (CNS/Mike Blake, Reuters)

The Catholic bishops of California welcomed the March 13 decision by Democratic Gov. Gavin Newsom to issue a moratorium on executions in the state and a temporary reprieve for all inmates on the state's death row.

"We appreciate this recognition that the state has the adequate means to defend human dignity and public safety without recourse to capital punishment," San Francisco Archbishop Salvatore Cordileone said in a statement on behalf of the state's bishops.

California's San Quentin State Prison is located in his archdiocese. The facility is California's oldest penitentiary and it houses the state's only death row for men and currently has 737 inmates condemned to death.

"We ask the governor to urge the Legislature to find a permanent legislative solution that will end the practice of capital punishment in our state for good," the archbishop said.

Because Newsom's declaration is a temporary reprieve for the death-row inmates, Cordileone said he and his fellow Catholic bishops are encouraging him "to use well the time of the moratorium to promote civil dialogue on alternatives to the death penalty, including giving more needed attention and care to the victims of violence and their families."

"Capital punishment is not a cure for the suffering and turmoil inflicted by violent crime; the restorative healing of victims and their families to the extent possible is an essential part of justice," the prelate said.

Los Angeles Archbishop José Gomez in a separate statement said it was "a good day for California and a good day for our country" because of Newsom's decision.

"For many years now, my brother Catholic bishops and I have been calling for an end to the death penalty, not only in California but throughout the United States," he said. "There are important public policy reasons for ending the death penalty."

Capital punishment "does not deter violent crime and it does not bring true justice or healing to victims of violent crime," Gomez said. "And sadly, judicial execution has always been a punishment imposed far more often on African-Americans, Hispanics and the poor in our society. But the most important reasons for ending the death penalty are moral."

He said that "every human life is precious and sacred in the eyes of God and every person has a dignity that comes from God. This is true for the innocent and it is true for the guilty. It is true even for those who commit grave evil and are convicted of the most cruel and violent crimes."

The death penalty "violates the condemned person's dignity and deprives that person of the chance to change his or her heart and be rehabilitated through the mercy of God," he explained. He also pointed to advances in law enforcement and criminal justice that keep societies safe so executing people is not necessary in that regard.

But ending the death penalty is only a first step, he said, and called for addressing inequities in the criminal justice system, improving prison conditions in prisons, providing alternatives to incarceration "for nonviolent crimes" and looking for new ways to rehabilitate offenders.

"Today, it is also important to remember the victims of violent crime and their loved ones," Gomez said. "We entrust them to the Father of mercies and commit ourselves to helping them to find healing and peace.

"We should also give thanks for the sacrifice and commitment of police and law enforcement officials, who put their lives on the line every day to keep our communities safe."

Bishop Frank Dewane of Venice, Florida, chairman of the Committee on Domestic Justice and Human Development for the U.S. Conference of Catholic Bishops, said the U.S. bishops join "the California Catholic Conference and all people of goodwill" in praising the governor's moratorium on the death penalty, which he described as a "wise step in better orienting the criminal justice system to recognize the inherent dignity of all human life."

"We are grateful and urge California lawmakers to take the next logical step to repeal the death penalty to bring a permanent end to this practice," he said in a March 14 statement.

Other Catholic leaders also said they were pleased with the California decision.

Krisanne Vaillancourt Murphy, executive director of Catholic Mobilizing Network, the national Catholic organization working to end the death penalty and promote restorative justice, said the decision was a "bold step toward abolishing a broken system that fails to protect the inviolable dignity of the human person."

"As Catholics, we believe that human dignity is to be protected no matter the harm someone has caused or suffered," she added. "Every person should have the opportunity for redemption."

Fr. Bob Bonnot, a retired priest of the Diocese of Youngstown, Ohio, and executive director of the leadership team for the Association of U.S. Catholic Priests, sent a letter to the California governor March 13 thanking him on behalf of the organization for "setting an example that all states in our nation should follow. We pray that succeeding governors will continue the compassionate path you have begun."

Sr. Helen Prejean, a Sister of St. Joseph of Medaille and a longtime opponent of capital punishment, tweeted March 13: "Thank you for your leadership, Gov. Newsom!"

She also tweeted that the governor's announcement was "truly good news, for the 737 souls on the country's largest death row, and for all who care about human rights."