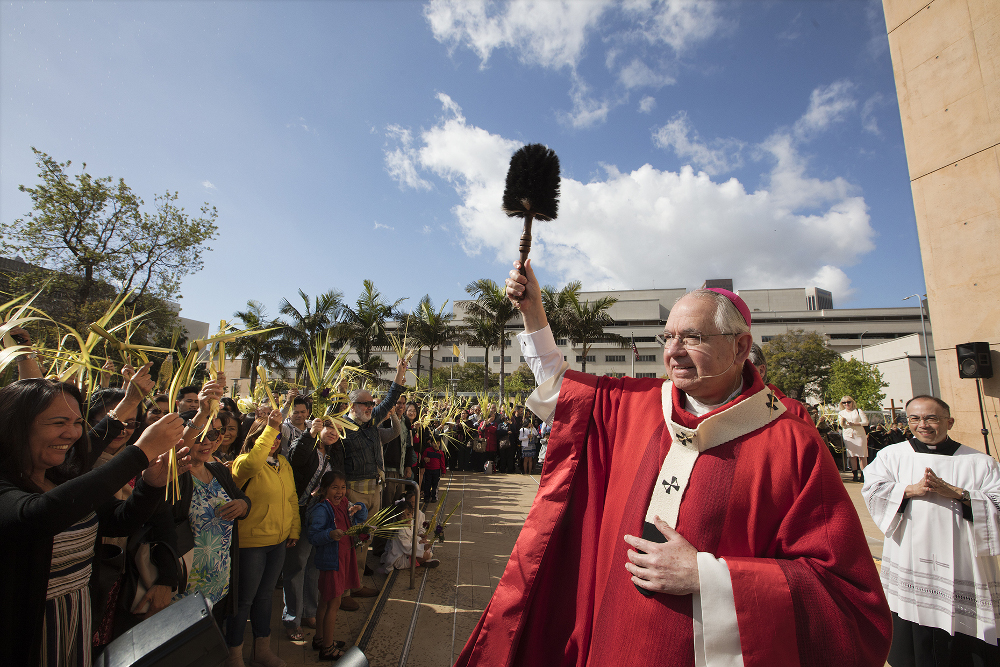 Archbishop Jose Gomez of Los Angeles blesses worshippers holding palm fronds before processing into the Cathedral of Our Lady of the Angels March 25 to celebrate Palm Sunday Mass. Gomez is vice president of the U.S. Conference of Catholic Bishops. (CNS/Victor Aleman, Angelus News)

In an ad placed May 18, in The Bakersfield Californian newspaper, which is in McCarthy's district, the California Catholic Conference, the public policy arm of the state's bishops, asked McCarthy, "Please don't abdicate your authority — allow a vote on DACA now."

There are four DACA-related bills in the House, but the California Catholic Conference asked McCarthy specifically for a vote on a bipartisan bill co-sponsored by two California congressmen, Jeff Denham, a Republican, and Pete Aguilar, a Democrat.

Their bill, the Uniting and Securing America Act, has 50 co-sponsors — 25 from each party. A companion Senate bill also has bipartisan sponsorship from Sens. John McCain, R-Arizona, and Chris Coons, D-Delaware.

The bill would prevent DACA recipients, also known as Dreamers, from being deported and would allow them to seek full citizenship. About one-third of all Dreamers live in California; they came across the U.S. border with their parents as young children.

It also would require the federal Department of Homeland Security to conduct a mile-by-mile security assessment of the U.S.-Mexico border and estimate the cost of securing each mile by 2019, with an eye toward implementation by 2020.

The bill would further add at least 165 immigration judges and 69 immigration attorneys by the end of 2020 to address a backlog in immigration courts.

"The time to act is now. We have to do what we can to protect these blameless people who were brought into our country when they were only small children," the letter to McCarthy said, asking that a vote be taken by June 25. "You have the power to allow for a debate and a vote on DACA. As majority leader, you and Speaker (Paul) Ryan (R-Wisconsin) can decide what legislation reaches the House floor," it added.

An effort is under way to collect sufficient signatures on a discharge petition, which would sidestep Ryan and McCarthy and force the bill onto the House floor for debate.

The letter was signed by Bishop Jaime Soto of Sacramento, Archbishop Jose Gomez of Los Angeles, who also is vice president of the U.S. bishops' conference, and Bishops Armando Ochoa of Fresno, whose territory includes Bakersfield.

David Scott, spokesman for the Archdiocese of Los Angeles, said the Orange County Register refused to accept the ad.

Gomez also posted a message May 18 on the Los Angeles Archdiocese's Angelus News Facebook page calling for a DACA vote.

"The Dreamers have been waiting for decades for Congress to do its job and pass immigration reform legislation. But for many years now, reform has been blocked in the House for political reasons by a minority of lawmakers," Gomez said. "This is happening again, right now. It is wrong. It is cruel, unjust and frustrates the will of the American people."

He added, "There is broad bipartisan support in Congress to help the Dreamers. More than 75 percent of Americans support granting these young people a permanent legal status. This is not about Republicans or Democrats. It is about right and wrong. People's lives are in the balance."