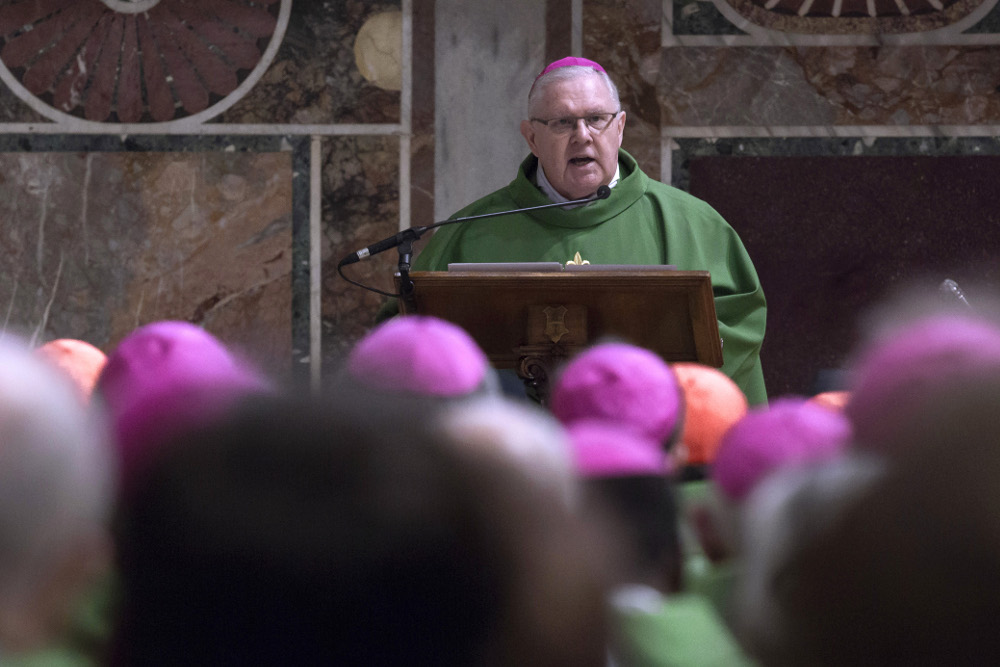 Archbishop Mark Coleridge of Brisbane, president of the Australian bishops' conference, gives the homily during a Mass at a meeting on the protection of minors in the church at the Vatican Feb. 24, 2019. (CNS/Maria Grazia Picciarella)

The Archdiocese of Canberra and Goulburn has launched an investigation into Archbishop Mark Coleridge, president of the Australian Catholic Bishops' Conference, over how he handled information on child abuse within the Catholic Church 13 years ago.

The Canberra Times reported Feb. 27 — still Feb. 26 in many parts of the world — that the complaint relates to a 2006 meeting with a woman who approached the archbishop with information about the abuse; Coleridge, who has served in Brisbane since 2012, headed the Archdiocese of Canberra and Goulburn at the time.

A spokeswoman for the Canberra Archdiocese confirmed to the Canberra Times that the archdiocese had launched an independent inquiry after it was made aware of the allegations a few months ago.

The Times reported the spokeswoman as saying: "Archbishop Mark Coleridge cooperated with the investigation and strongly refuted the allegations. When the complainant was invited to cooperate with the independent investigation, she chose not to engage the process.

"She has instead chosen to take the allegations to the media, which is deeply disappointing," the statement said.

The Canberra Times posted the story on its website at 12 a.m. Feb. 27, less than 24 hours after an Australian court announced that Australian Cardinal George Pell had been convicted of five counts of sexual abuse of minors, dating to 1996. The cardinal plans to appeal the ruling.

As president of the bishops' conference, Coleridge attended the Feb. 21-24 Vatican summit on protection of minors, and he preached at the closing Mass.

In his homily, Coleridge said the Catholic Church needs a true conversion that places survivors, and not the institution, as the focus of its concern as it enacts measures to combat the sexual abuse of minors and vulnerable people. He spoke of a need for a church where "those who have been abused do not revolve around the church but the church around them."

"In discovering this, we can begin to see with their eyes and to hear with their ears; and once we do that, the world and the church begin to look quite different," he said. "This is the necessary conversion, the true revolution and the great grace which can open for the church a new season of mission."