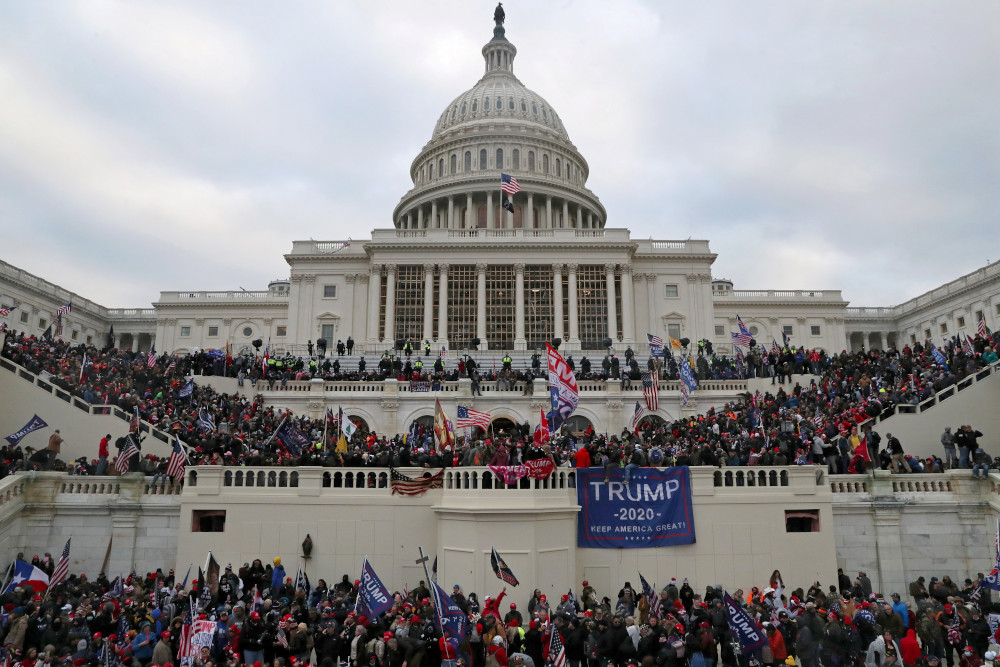 Just days after the siege on the U.S. Capitol, several bishops, priests and deacons across the country used their pulpits during Jan. 9-10 weekend Masses in cathedrals, parishes and converted outdoor worship spaces, due to the pandemic, to address what happened in Washington and how people of faith should respond.

The messages primarily received positive feedback, but they also were criticized.

Some of the priests who shared their homilies with Catholic News Service stressed they were not pointing the finger at those who participated in or instigated the riot but were encouraging parishioners, and themselves, to take a careful and critical look at how this happened and what it means going forward.

Fr. Michael Alello, pastor of St. Thomas More Parish in Baton Rouge, Louisiana, said there have only been a few times in his 14 years as a priest when he felt strongly compelled to speak out about something happening in the country: the death of George Floyd, the Black man killed during an arrest in Minneapolis last May; the 2016 death of Alton Sterling, a Black man shot by police in Baton Rouge; and the 2012 school shooting at Sandy Hook Elementary School in Newtown, Connecticut.

"I'm not a controversial preacher; I'm not a hot-button preacher," he told Catholic News Service Jan. 11, adding that his aim is to reach hearts and to "bring the Gospel message alive."

When he saw what was unfolding Jan. 6 at the Capitol, he said he "started to ponder what the message in all of this was for us." And, even though he is a self-proclaimed procrastinator, he began working on his homily Jan. 7, which as he put it: "says a lot."

He kept working on it right up to Sunday morning, although he had two funerals Friday and a wedding Friday night and Saturday.

During his three Masses on Sunday, all with about 75% capacity following state coronavirus guidelines, the priest urged the congregation to recognize their baptismal call to listen to God's voice and respond to it, which went along with the day's Gospel reading of the baptism of Jesus by John the Baptist.

Referring to the Capitol attack, he said: "A mob ransacked the building that represents who we are as Americans."

"No, my brothers and sisters, we belong to each other," he said.

One woman told the priest after Mass she thought he was saying people had to accept the presidential election results, which he wasn't, but many parishioners called or emailed to thank him for his words.

One parishioner said he sensed the priest's "exhaustion and frustration," which Alello couldn't dispute. He also received feedback far beyond his parish since the Mass is now livestreamed and has picked up viewers in other states.

"If you make your homily too overtly political, you're treading on dangerous ground. People will walk out or not get Communion from you," said Franciscan Fr. Jud Weiksnar, pastor of Ss. Columba-Brigid Parish in Buffalo, New York. "It has to be based on Scripture," he added, which is why he linked his response to the Capitol riots to the day's first reading from Isaiah about crying out for justice.

Deacon Jerry Hodson at the same parish said he is still new to giving homilies, since he became a permanent deacon a year and a half ago. He said after the death of George Floyd the pastor asked him if he planned to talk about that in his homily, something which he initially hadn't considered but then thought it was the right thing to do.

And so, with the recent uprising in Washington, he felt compelled to say something and even changed homilies for his second Mass to be more direct about it.

"We are all shocked and saddened by what happened," he said at the Youth Mass Jan. 10. "These angry people were encouraged to riot by the words and actions of politicians who had lost their focus of what it is our government is about — to serve the people and bring justice and peace to our nation."

The deacon outlined a path forward that lined up actions with Catholic social teaching, emphasizing that "our church teaches us how to bring justice and peace into the world. The Catholic Church has a history of social teaching that goes back hundreds of years. This teaching challenges us to live in ways that build a more just and peaceful society."

Bishop Robert P. Deeley of Portland, Maine, who celebrated a Jan. 10 Mass at Cathedral of the Immaculate Conception in Portland, likened the Christian call in baptism to bring hope and love to others as something that "feels even more immediate and critically important following the tragic and horrific events that occurred during the domestic terrorist attack at the U.S. Capitol."

He said the assault has "frightened us and dismayed us" and made him wonder if people who had looked to this country as a model for how democracy works found that hope "undermined' by what took place Jan. 6.

The bishop said he has not lost hope and urged the congregation in the cathedral and those watching the livestream to pray for the country and especially for its leaders "that they will find a way to appreciate each other as human persons, not as holders of political positions, and seek ways, through the conciliation and negotiation which is government, to listen to the voices of all the people and lead justly and fairly seeking the compromises needing to be made to bring us together as a people."

Bishop Michael F. Burbidge of Arlington, Virginia, celebrating Mass Jan. 10 at the Cathedral of St. Thomas More in Arlington in recognition of upcoming Martin Luther King Jr. Day, began his homily by similarly condemning the violence at the Capitol Jan. 6.

He also recalled Rev. King's words from the Birmingham Jail "telling us that this nation will have to repent not only for hateful words and action, but most especially for appalling silence."

The bishop asked the congregation to examine their conscience and consider: "Do I play any part in bringing harsh rhetoric or hateful actions to my community or workplace? Have I been silent when I should have intervened?"

And across the country, Fr. Paul Keller, a Claretian Missionary priest, serving at St. Paul Catholic Newman Center Parish in Fresno, California, similarly urged his congregation in an outdoor Mass, to examine their own consciences in moving forward from what happened at the U.S. Capitol.

"Many of us experienced with sick stomach and sad hearts" what took place, he said.

He stressed that violence, hatred and destruction is not of God and urged the congregation, all in winter coats outside, to look at how they can plant seeds of truth, justice and peace.

In a message to CNS, the priest said he wanted parishioners to know their faith can keep violent tendencies in check and that even though "almost certainly the majority of those attacking the Capitol consider themselves Christians," they were not acting Christ-like.

At the end of his homily Jan. 10, Keller read an examination of conscience related to the past week's events that he found on the Twitter feed of Sr. Theresa Aletheia Noble, a Daughter of St. Paul.

Some of the questions include: "Do I allow feelings of rage, hatred, and bitterness toward those I see as political enemies grow in my heart?" and "Am I regularly distracted from my responsibilities by news, pundits, political arguments and negative feelings toward those with whom I disagree?"

Sr. Theresa, a former atheist who is the author of several books about meditating on one's death to prepare for heaven, said she came up with these questions "after the frightening and sobering events in the U.S Capitol" and upon the suggestion from Los Angeles Auxiliary Bishop Robert E. Barron that the country should engage in an examination of conscience.

She told CNS she received a lot of responses from the initial Twitter thread. Some comments were negative, she said, "but most of it was overwhelmingly positive."