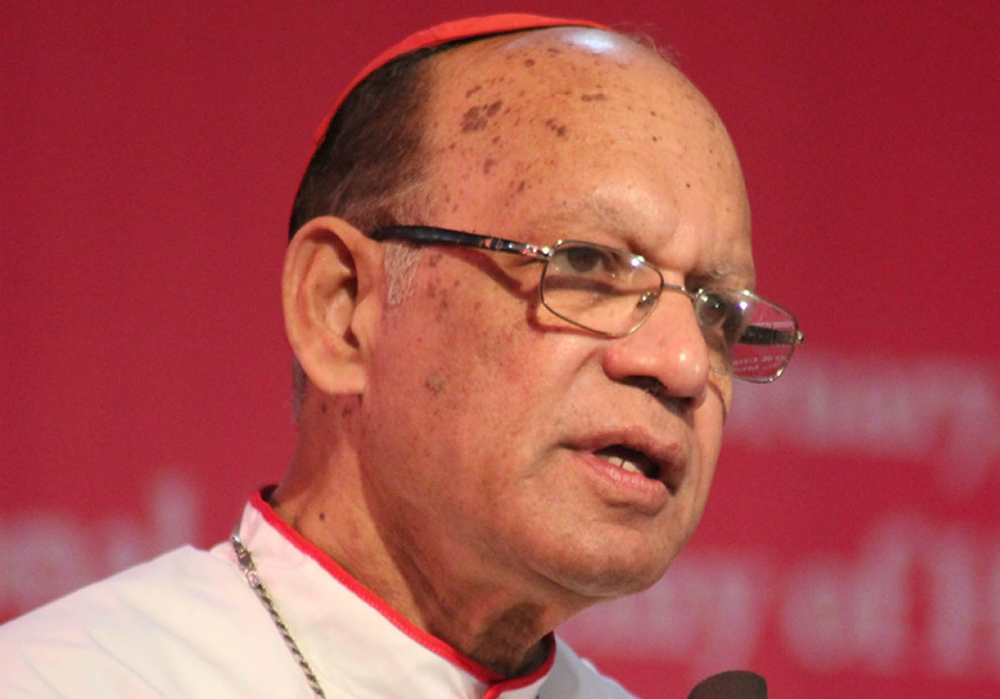 One of the six members of Pope Francis' advisory Council of Cardinals has acknowledged a bias among the members of the Catholic Church's all-male hierarchy against giving women more leadership roles, saying he and his peers must "shed this prejudice."

In an NCR interview, Indian Cardinal Oswald Gracias called himself a "convert" to the cause of women seeking more opportunities for responsibility in the global institution.

Mentioning women throughout the world "who are doing so much" for the church, the cardinal said women "want an apostolate, want to work for evangelization, want to give leadership in the church parish community."

"We have not applied our mind to it," said Gracias, adding: "I admit there's been a prejudice against giving them greater responsibility, and we must shed this prejudice."

"I hope we are able to examine carefully, discuss carefully how they can have greater responsibility," the cardinal continued, before quickly correcting his choice of words.

"Responsibility, they have," he said. "But there's no recognition for the responsibility they have. They are really doing so much. But I think there should be recognition, which is their right."

Gracias, the archbishop of Mumbai, was speaking in a half-hour interview Feb. 21 at the Vatican's Casa Santa Marta. It followed the Feb. 17-19 meeting of the Council of Cardinals, which is primarily helping Francis reorganize the Vatican's sprawling bureaucracy.

The prelate, who is also the president of the Indian bishops' conference, spoke as well about the pope's recent apostolic exhortation responding to October's Synod of Bishops for the Amazon region.

The cardinal suggested that although the pontiff did not grant the synod's request for the allowance of married priests across the nine-nation region in order to meet pastoral needs, prelates from the affected areas could still petition the Vatican for such an accommodation on a case-by-case basis. Francis, Gracias said, had left such a path "open."

But Gracias spoke most candidly about the role of women in the 1.3-billion-member church. He said he began to change his mind on the issue of women's leadership in February 2019, when he took part in a global summit called by Francis for presidents of bishops' conferences on clergy sexual abuse.

The cardinal said the women who addressed the gathering "brought up some new aspects, new insights into the whole."

"Honestly, all the male speakers, I knew everything before," he said. "I had heard it before, read it before. What the women said was new to me."

"I am now an advocate for women's rights in the church," said Gracias. "I empathize with why women are asking for greater rights."

Asked about the status of a commission Francis created in 2016 to study the history of women serving as deacons in the church, which the pontiff told the Amazon synod he would be re-convoking, the cardinal said he did not have specifics, but believed the commission's work was "still in progress."

Gracias said he knows from discussions with the pontiff that Francis is "very keen that women have a greater role in the church, in decision-making."

"His mind is open," the cardinal said of the pope's disposition on the issue. "But there are pressures. He has to carry everybody with him."

"The pope speaks of synodality, where we take everyone along with us," said the prelate. "And then, if necessary, we go slower than we would like to go because of that."

Gracias has served in his role in the Bombay Archdiocese since 2006, and was made a cardinal by Pope Benedict XVI in 2007. He has participated in several Synods of Bishops and was one of 185 members of the Amazon gathering, which was held at the Vatican Oct. 6-27.

The cardinal said he was "a bit surprised" by Francis' exhortation, released Feb. 12 and titled Querida Amazonia ("Beloved Amazon"). The prelate pointed to the pope's extensive use of poetry, and his decision not to cite from the synod's final document, but to encourage people instead to read it in full.

Asked about Francis' decision not to grant the synod's request for the allowance of married priests, approved by a two-thirds vote of the assembly, Gracias mentioned one of his own speeches during the event.

"I had suggested in my intervention that, following present canon law, there's a possibility," he said, explaining that the married status of a possible candidate for priesthood is "an impediment, for which a dispensation can be given by the Holy See." 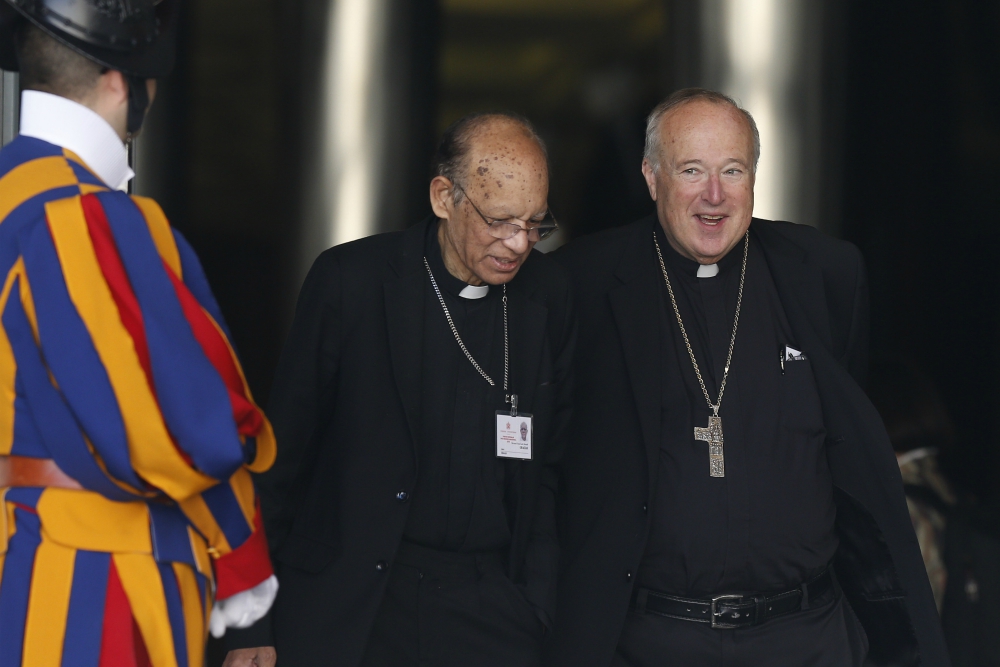 Cardinal Oswald Gracias of Mumbai, India, and Bishop Robert McElroy of San Diego leave a session of the Synod of Bishops for the Amazon at the Vatican Oct. 21, 2019. (CNS/Paul Haring)

The cardinal said he had suggested that bishops from the Amazon region, or groups of bishops, could petition the Vatican to grant them such dispensations.

By not addressing the question directly in the apostolic exhortation, Francis has left that possibility free, said Gracias. "While he's not addressed it here … by endorsing the [final] document he leaves that open."

Clarifying that he has not specifically discussed the issue with Francis, Gracias added: "That's the way I would interpret it."

Curia not meant to be 'supervisory'

Francis has made reforming the Vatican one of the priorities of his nearly seven-year papacy. He created the Council of Cardinals in April 2013 to help him undertake the process.

The council has devoted much of its work in the following years to drafting a new apostolic constitution, which is expected to represent the first wholesale reorganization of the Vatican since Pope John Paul II published Pastor Bonus ("The Good Shepherd") in 1988. The new text is tentatively titled Praedicate Evangelium ("Proclaim the Gospel").

An earlier draft of the document, obtained by NCR last summer, showed a significant reorientation of the mission of the various Vatican offices, emphasizing that officials must no longer consider themselves a "superior authority" but servants of the pope and the world's bishops.

Gracias said he and the other members of the council had made that reorientation a primary focus of their endeavors.

"One of the focuses of our work was that the Curia is at the service of the Holy Father, and of the bishops," said the cardinal. "We made that clear over and over again."

"We put that explicitly, and in the articles, you can see that mentality has come through," he said. "The earlier idea [was] that it's a supervisory role of the bishops. No, it's not. It's helping the bishops. It's meant to help the universal church."

Pope Francis leads a meeting of his international Council of Cardinals at the Vatican in February 2017. Indian Cardinal Oswald Gracias is third on the right from the pope. (CNS/L'Osservatore Romano, handout)

In its most recent meetings, the cardinal said, the council has been incorporating suggestions from bishops who have reviewed the document. But he said most of the changes have been stylistic. "There has been no change in thrust," said the prelate.

Gracias said he believed the council should be able to formally give the finalized document to Francis by the end of its next meeting, scheduled for April.

Speaking more at length about the February 2019 gathering on clergy sexual abuse, held almost exactly a year ago, Gracias said the summit "had an effect of raising consciousness about the problem."

"It had an effect of all the bishops feeling collegially responsible," he said. "If anything is affecting the church, all of us must put our shoulder to the wheel, all of us helping together, consistently looking for new systems."

The cardinal praised the various efforts Francis has taken since the conclusion of the summit, including mandating that all priests and members of religious orders worldwide report any suspicions of abuse, and abolishing use of the "pontifical secret" in abuse cases.

Gracias said Francis had done more in a year's time than he would have expected. "I really can't see him doing that much more," said the cardinal. "I feel that he has stretched himself, given this priority over other things."

Asked about the status of an expected Vatican report about the career of disgraced ex-Cardinal Theodore McCarrick, expected to be released by the Secretariat of State sometime soon, Gracias said he had no particular knowledge on the issue.

"I don't know much about it," said the cardinal. "My own experience is that the more open we are, the better for everybody concerned."

A version of this story appeared in the April 3-16, 2020 print issue under the headline: Cardinal Gracias: Church must 'shed prejudice' against women’s leadership.