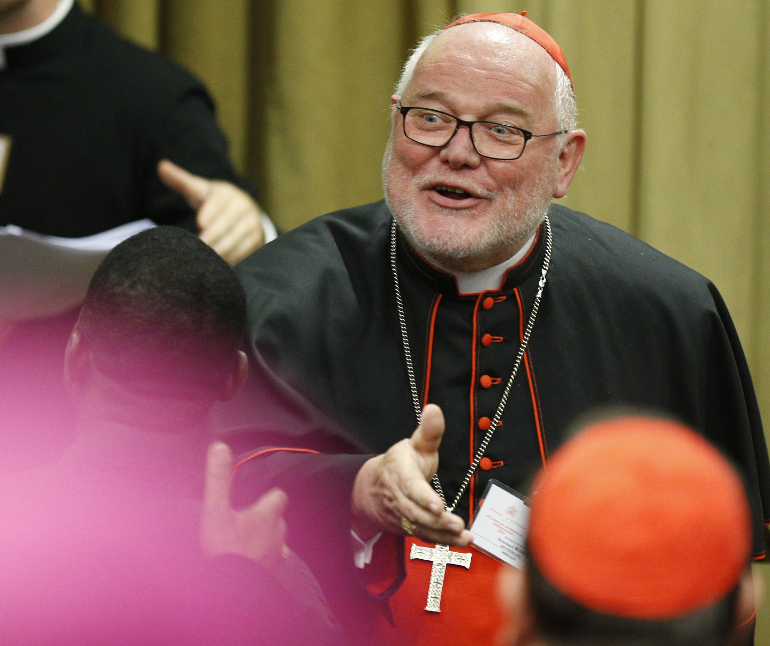 Cardinal Reinhard Marx of Munich arrives for the opening session of the Synod of Bishops on young people, the faith and vocational discernment at the Vatican Oct 3. (CNS photo/Paul Haring)

The German prelate who serves on Pope Francis' advisory body of cardinals has called for the Catholic Church to adopt "fundamental, systemic change" in order to address the continuing clergy sexual abuse crisis.

Cardinal Reinhard Marx, one of nine members on the Council of Cardinals, suggested discussions about such change could focus on three areas: adoption of "good governance" practices, compliance with safeguarding norms, and a focus on creating a "higher degree of accountability" for church leaders.

"There can be no restoration of the church's credibility without fundamental, systemic change," Marx told participants of an Oct. 5 event at the Pontifical Gregorian University for the inauguration of the institution's new graduate-level degree in safeguarding.

"We must be grateful to the public pressure, the criticisms and the voice of the survivors … which help us to improve," he said.

Marx, the archbishop of Munich and Freising, also serves as the president of the German bishops' conference, which recently released a report indicating there had been an estimated 3,700 sexual abuse cases in the country over the past seven decades.

At the Sept. 25 press conference releasing that report, the cardinal apologized for the abuse, saying it had been "covered up for far too long."

During his address at the inauguration of the new degree program at the Gregorian, being offered by the university's Centre for Child Protection, Marx said the abuse scandals "have plunged the church into one of its most serious crises worldwide, raising many questions and challenges for the future."

"This is challenging, exhausting, but at the same time without alternative," said the cardinal. "We must help together to promote a variety of constructive initiatives and create synergies."

Describing the three areas he suggested for change in the church, Marx said that good governance practices should acknowledge that priests and bishops are not granted leadership skills "automatically, simply by ordination."

"Leadership must be learned and practiced," said the cardinal, adding that it is "absolutely unacceptable to say" that those who are ordained become leaders "simply by being ordained."

On the area of accountability for bishops who mishandle priests who have abused children, Marx said that the church's understanding of the need for accountability was "only rudimentary" because of the nature of its hierarchical structure.

"This raises the question of how a higher degree of accountability on the part of leaders can be achieved," he said. "I think we have also to develop the canon law. This is also the time to look at canon law to make progress."

The cardinal also noted that systemic changes "don't just happen by themselves."

"The corresponding agents of change … are required," he said, describing such agents as "actors and initiators who also in the worst case are willing to provoke controversy."

Sharing a memory from the discussions among cardinals held in Rome before the 2013 conclave that elected Francis, Marx said that one sentiment shared at the time was the need for "open discussion" in the church, without fear of what someone's superior is expecting or wanting to hear.

"That is not the way to bring things forward," he said.

Ending his talk, Marx told the participants at the event that Jesus "stands with the weak and the small."

"We want to stay with him," said the cardinal. "It is a serious and challenging hour for the church. Please, don't have fear."