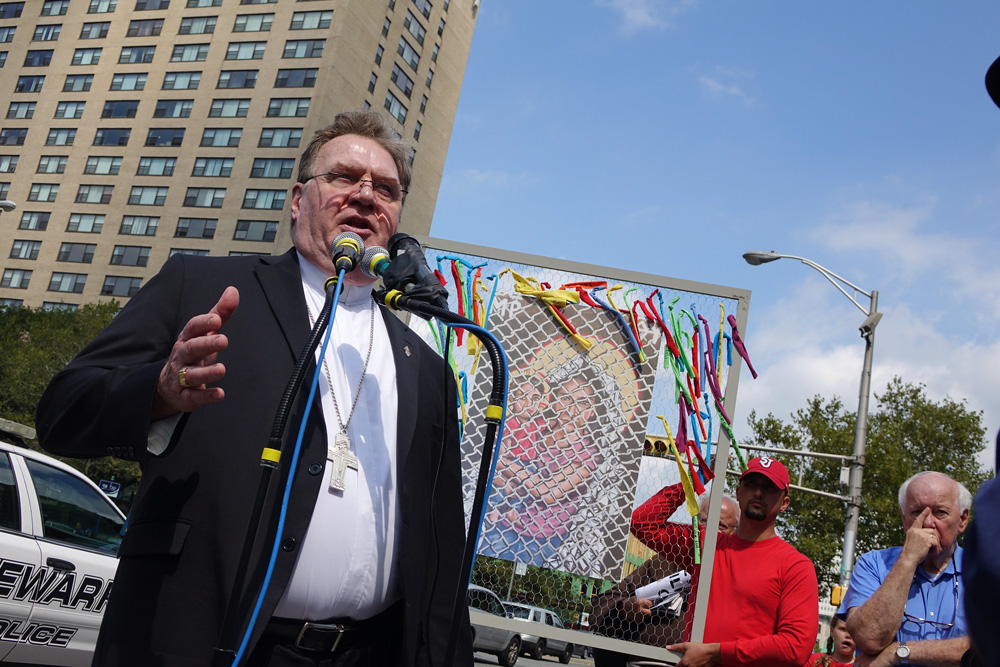 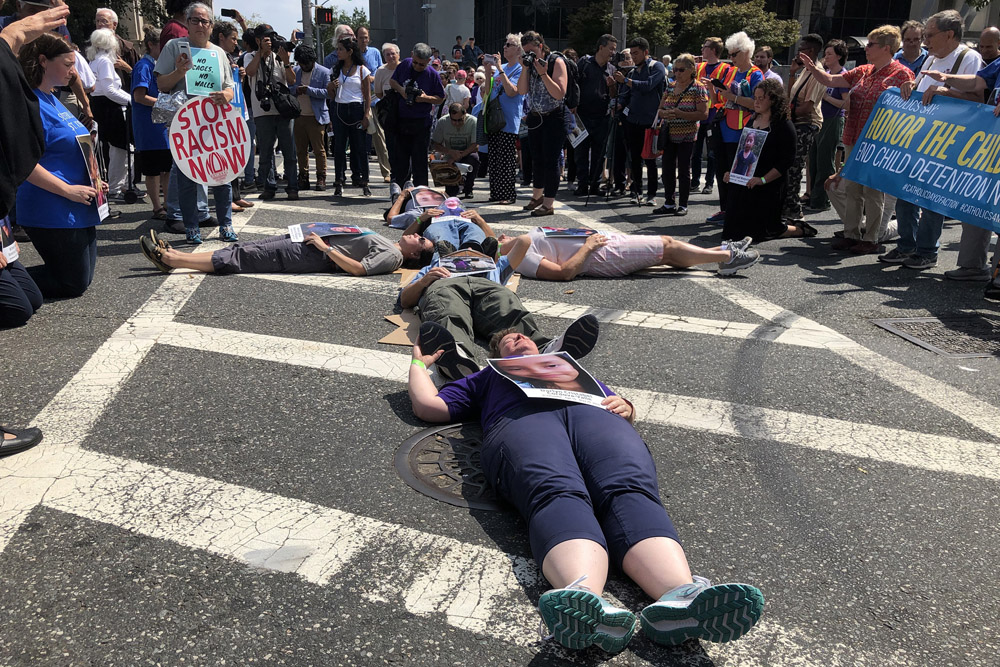 Over 400 participants — priests, nuns, activists, students and laypeople — on Sept. 4 in Newark, New Jersey, protested the "inhumane treatment" and detention of children and families at immigration centers across the country. Cardinal Joseph Tobin of Newark led hundreds of Catholics in a demonstration against U.S. Immigration and Customs Enforcement at the Federal Building in Newark as the crowd chanted, "Stop the inhumanity." 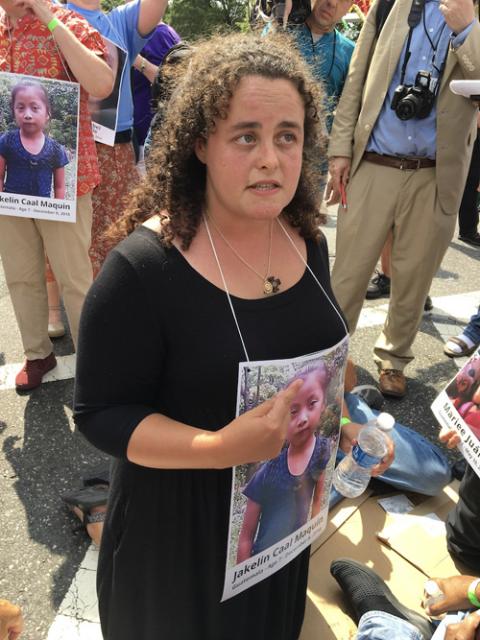 Demonstrators took part in civil disobedience — blocking traffic as they occupied the busy Broad Street crosswalk, and lay in cross formation for hours. Attendees formed a protective circle around those risking arrest, and recited the rosary. Six demonstrators were taken into custody by the Newark police, among them a Benedictine postulant, Jacqueline Small.

"As a daughter and granddaughter of immigrants, as somebody who grew up here in Elizabeth, I feel very strongly for this important issue and to make our voices heard as loud as possible, that children and families belong together," she said before being arrested.

Small, who currently lives in Erie, Pennsylvania, wore a picture of 7-year-old Jakelin Caal Maquin around her neck. Maquin died after being taken into custody by the U.S. Customs and Border Protection in December 2018. Small hoped that the presence of Catholic women religious at the protest would inspire more people to speak up.

The six were released shortly after. 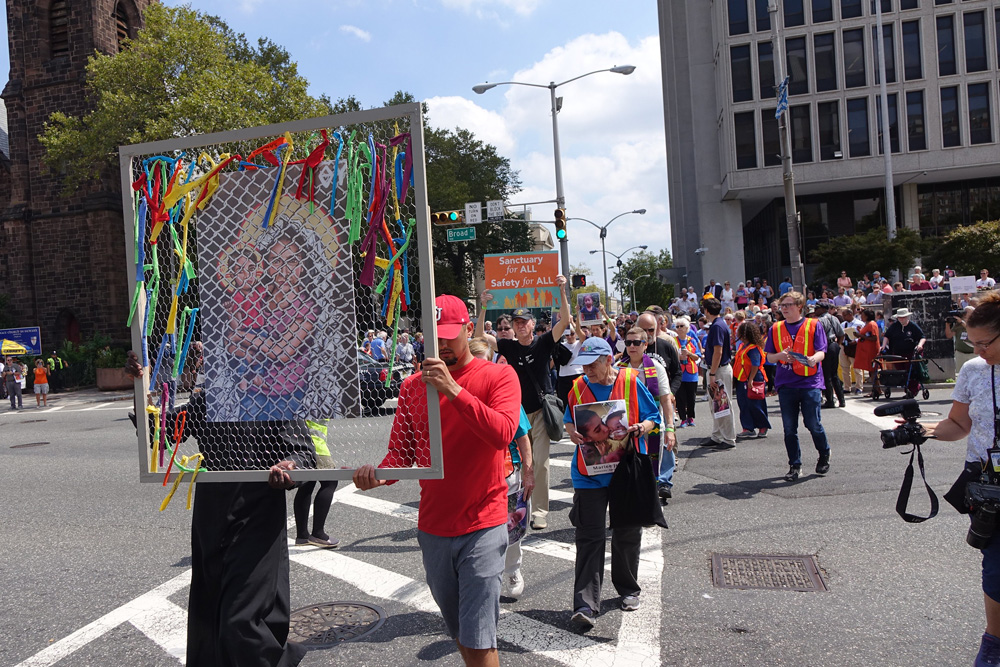 Participants assembled at St. Mary's Church then proceeded to the Peter J. Rudino Federal Building on Broad Street, where the ICE office is located. The march was led by an icon of "Mother of God: Protectress of the Oppressed," by artist Kelly Latimore. The icon depicts a Latin American mother and child, draped in a Mylar blanket, inside a chainlink fence. Some said the rosary and sang songs, while others chanted slogans against ICE. Many demonstrators clutched pictures of children who died in detention, after crossing the southern border.

"Today, I stand in solidarity with my brothers and sisters in Christ to decry the treatment of children who bear the trauma wrought by immigration enforcement raids, separation from their families and indeterminate detention," Tobin said, addressing the gathering in front of the building. "These draconian measures are not a solution to our broken immigration system. They are violations of human dignity and are contrary to all religious teachings and the sacred call to care for our most vulnerable populations."

The protest took place the same day a report from the inspector general's office in the U.S. Department of Health and Human Services found that migrant children separated from their parents exhibited more fear, feelings of abandonment and post-traumatic stress symptoms, than children who were not separated. These problems, according to the report, were caused by the Trump administration's "zero tolerance" policy.

"Unlike others, we don't have to look up Bible verses to justify the building of walls — there are none," said Tobin. "Instead, we look to 1 Psalm, Verse 27 which says children are always a blessing. Children must always be protected. So-called deterrence policies do not address the underlying causes of irregular migration, which are much stronger than any deterrent can every address."

Patrick Carolan, executive director of the Franciscan Action Network, said that the events of the day will act as a wake-up call to all and turn attention to the horrors on the border. He said the protest was a message to "some leaders on Capitol Hill who say they are Catholic, but don't act Catholic at all. Don't forget, 2020 is coming up!"

Activist Carol Gay said it was heartening to see Catholics around the country organizing against immigration detention. She expects more people to join the cause.

As demonstrators chanted slogans, a grandmother approached the organizers and requested to speak. Angela Lopez had come to the ICE office that morning with her daughter and three grandchildren. Her daughter was summoned for a meeting, and asked to bring her passport and a ticket to Honduras. As she waited outside, Lopez watched the demonstrators and was moved by their actions. She came forward to share her story and thank them. She said that her daughter's fate is in "the hands of God and the ICE officers in that building. I'm grateful to the United States, the Catholics that are here today and I'm going to keep fighting for my grandchildren."

Lopez later joined activists on the crosswalk. For St. Joseph of Peace Sr. Susan Francois,* a Lopez's actions were the most powerful moment during the entire event.

"Her sharing is what made it for me. I was heartened by the number of people who showed up," Francois said. "This is the first time I discerned risking arrest. There couldn't be a more powerful experience of solidarity." Before deciding to participate in civil disobedience, Francois spoke to her leadership team, and her spiritual advisor, and meditated. "I got a resounding 'yes'," she said.

The campaign was developed by a Catholic coalition of various organizations to pressure the Trump administration and Congress to end child detention. The first event took place in July at the Russell Rotunda in Washington D.C., where 70 Catholic leaders and activists were arrested. At Newark, more than 50 people were willing to be taken into custody.* 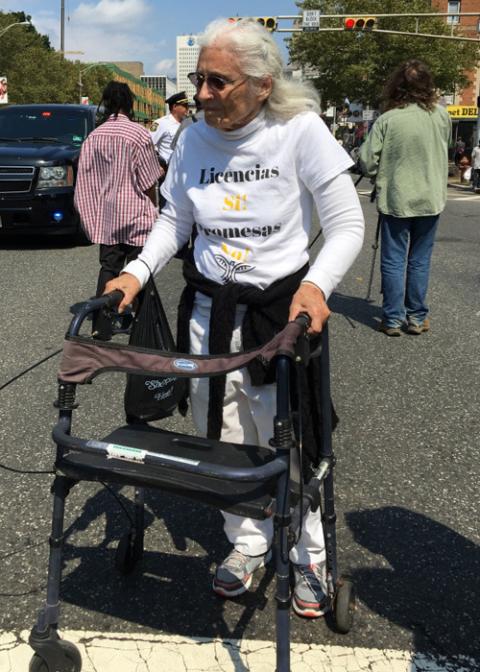 Rena Amada, 87, was looking forward to being detained by the police.

"I've been arrested before, I came here to do that," she said. Amada hoped that her arrest could shine light on the country's broken immigration system, especially the backlog in immigration courts.

"We need to hasten the process. Immigration reform is broken, but the government is not interested in helping. They could increase the number of judges, they could increase the people that can help in asylum (processing). They don't want that, they want the whole country to be white," she said.

Immigration courts along the southern border of the United States are currently overwhelmed with cases, as judges try to fast-track hearings for asylum-seekers in Mexico, placed under the Trump administration's "Remain in Mexico" policy. Under this program, thousands of migrants are returned from the U.S. port of entry and made to wait in Mexico, while the judges hear their asylum claims in the U.S. As a result, cases of those from the United States are being delayed, causing a backlog. This backlog has led to more children being in detention indefinitely.

Mercy Sr. Mary Kay Dobrovolny was among the first group of demonstrators participating in civil disobedience action. She said her attempt was a simple way to be concrete and say that the government does not speak in her name. Dobrovolny's attempt at risking arrest stemmed from a personal space.

"I really thought about the children and the long-term impact of childhood trauma on their lives," she said. "I am an aunt of a child who has had childhood trauma, and is struggling to get through adolescence. The migrant families that are coming here are my brothers and sisters. How do I be a good aunt to these children as well as my own niece whose story I know?"

The Catholic coalition chose New Jersey as their second venue for the protest as the state is home to four detention facilities — Bergen County jail, Elizabeth Contract Detention Facility, Essex County Correctional Facility and Hudson County Correctional Facility. These facilities came under severe criticism recently for profiting off of immigration detention. Several advocates have called for the state of New Jersey to end its contract with ICE.

Stacey Gregg, from Close the Camps, Jews Against ICE and Never Again is Now, pointed out to the dismal condition of the state's immigration detention centers. A June 3 federal report found that the Essex County Correctional Facility in Newark, provided detainees with rotten food, decrepit bathrooms and lack of outdoor space among other "egregious violations of detention standards."

Although Tobin was the only prelate present, several bishops lent their support to the demonstration and civil disobedience action.

Tobin called Catholics and "people of goodwill" to action, saying, "I ask Catholics and others of goodwill to contact their local state and federal elected officials and urge them not to manipulate families as political pawns. As a nation we must come together for immigration reform which defends the family, protects human dignity and enshrines the sacredness of life."

[Sarah Salvadore is an NCR Bertelsen intern. Her email address is ssalvadore@ncronline.org. Follow her on Twitter at @sarahsalvadore.]

*This story has been changed to to correct the name of Francois' community, and to clarify conflicting numbers between sources on how many people risked arrest at the New Jersey action.

A version of this story appeared in the Sept 20-Oct 3, 2019 print issue under the headline: Catholics protest against ICE in Newark.