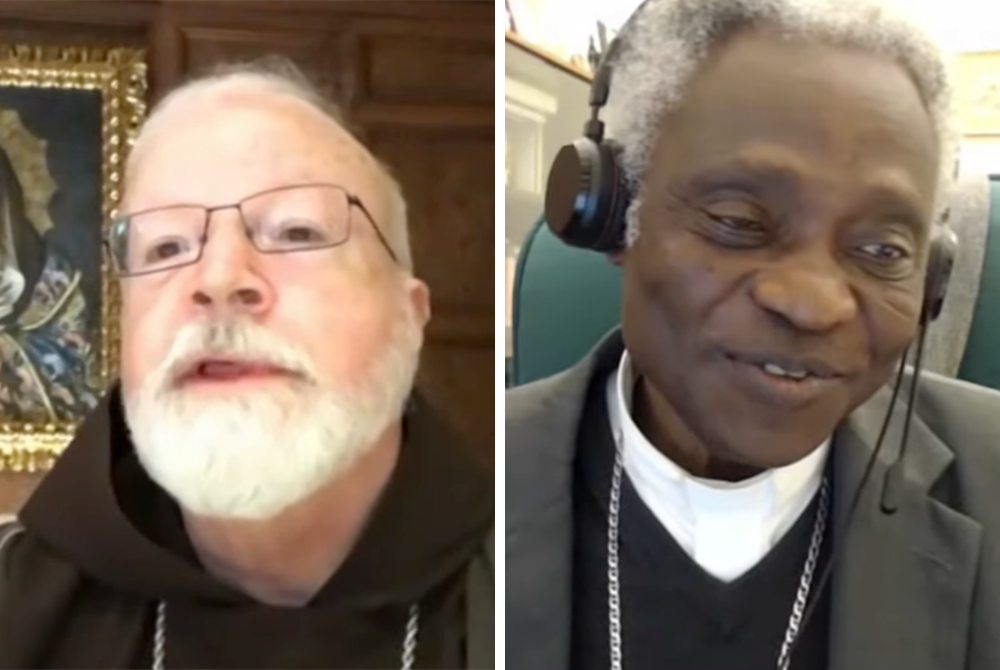 Boston Cardinal Sean O'Malley, left, the only American on the pope's advisory Council of Cardinals, and Cardinal Peter Turkson, who leads the Vatican's Dicastery for Promoting Integral Human Development, appear in screenshots from a March 18 webinar. (NCR photo)

Two Catholic cardinals who are close advisors to Pope Francis defended his decision to approve a Vatican decree that bans priests from blessing same-sex unions, saying during a March 18 webinar that the church needs to be clear in its teaching that marriage is between a man and a woman.

Boston Cardinal Sean O'Malley, the only American on the pope's advisory Council of Cardinals, said that while Francis wants to be close to people in their everyday challenges, "the church has a very clear teaching about marriage that needs to be proclaimed."

Cardinal Peter Turkson, who leads the Vatican's Dicastery for Promoting Integral Human Development, concurred. He said that although the pope has "concern and solicitude" for the needs of LGBT people, the church is also "a path to salvation."

"For the church to be church, a path to salvation, it needs to recognize that the truth … is not something that it develops itself," said Turkson.

The two cardinals were speaking at an event hosted by Georgetown University's Initiative on Catholic Social Thought to celebrate the eighth anniversary of Francis' papacy, which was marked on March 13.

They were responding to a question about a March 15 decree from the Vatican's Congregation for the Doctrine of the Faith, which barred priests from blessing gay unions on the grounds that God "does not and cannot bless sin."*

Using an Italian word for closeness, O'Malley said that throughout his papacy Francis had shown "a desire for what he calls vicinanza — to be close to people in the reality and the challenges of their lives, no matter what that may be."

"The Holy Father tries to be very sensitive and pastoral in his outreach to people and to show his concern about individuals and, at the same time, his commitment to fidelity to what the church's teaching is about the sacrament of marriage," said the cardinal.

Turkson told the webinar that he had some years ago met with a gay couple from London who had told him that "out of respect for the sacrament, and what marriage is as a sacrament, they decided not to ask for marriage."

The Vatican decree was criticized by a number of gay Catholic groups, who noted that it appeared contrary to Francis' frequent promotion of a "culture of encounter" and his numerous meetings with gay individuals and couples throughout his papacy.

A few bishops have also critiqued the measure. Antwerp, Belgium, Bishop Johan Bonny said March 17 that he feels "shame for my Church" and "intellectual and moral incomprehension" over the move.

Juan Carlos Cruz, a gay Chilean clergy abuse survivor who met with Francis in 2018, told the Washington Blade that the doctrinal officials who wrote the decree were "completely in a world of their own, away from people and trying to defend the indefensible."

Earlier on March 18, another Vatican cardinal appeared to offer a less fulsome defense of the decree against blessing gay unions. Kevin Farrell, head of the Dicastery for Laity, Family and Life, told a Vatican press conference that the church offers pastoral care to those in both sacramental and civil marriages.

"I do want to insist that nobody, nobody must ever be excluded from the pastoral care and love and concern of the church," said Farrell.