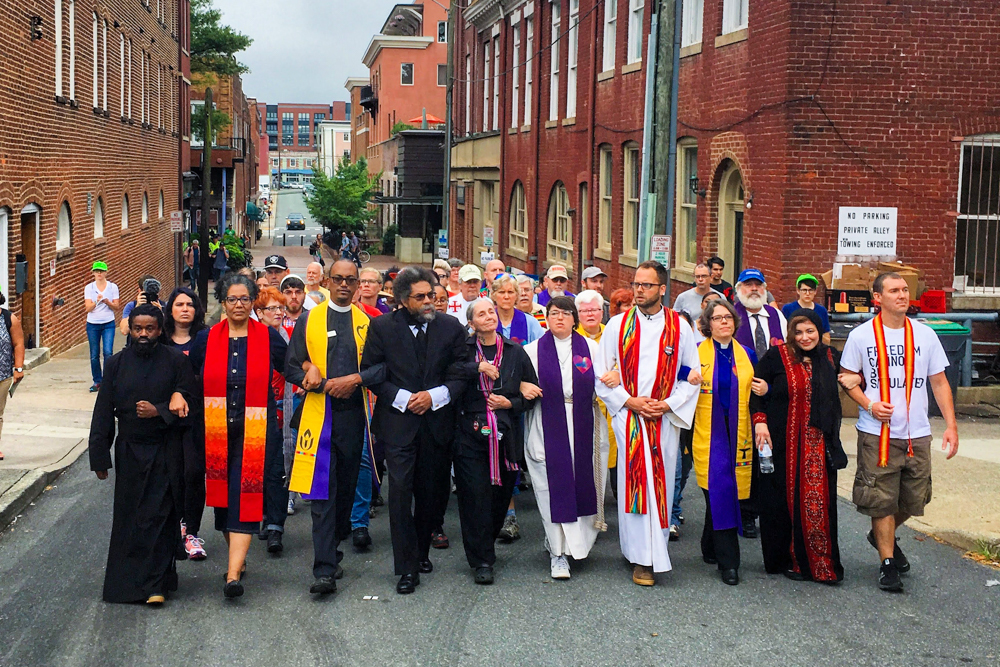 When students at the University of Virginia in Charlottesville saw one of the organizers of last August's white supremacist and neo-Nazi rally doing research in the law school's library last month, many — especially students of color — were terrified. Some were in tears and afraid to attend their classes.

Word spread among local anti-racism and peace groups, so when he returned a week later, a small crowd of students and allies confronted him by standing near the office where he was studying, some holding signs saying, "Blood on your hands" — referring to a young woman's death when a car drove into a group of counter-protesters at the rally.

Eric Martin, a theology student at Fordham University who is writing his dissertation while living in Charlottesville, decided to enter the office in the law library and quietly sit across the table from the "Unite the Right" organizer.

When a law school administrator asked Martin to leave and he refused, university police arrested him and led him out of the library in handcuffs. Now he faces trespassing charges that could result in a yearlong jail sentence.

But more than 400 theologians, ethicists and other scholars of religion have signed a letter to the university's executive vice president, requesting that the UVA not seek sanctions against Martin, whose actions they say exemplify the role of a public theologian who combines scholarship with activism.

"Mr. Martin has enacted a tradition of scholar-activism that is held up as a model in our field," said the letter, citing his public witness at protests against the oil pipeline at Standing Rock in South Dakota and at the Charlottesville counter-protest led by clergy and others.

"Mr. Martin's actions unfolded peacefully, did not disrupt the work of the University, and embodied the methods of nonviolent demonstration that our nation has long revered in the persons of Martin Luther King, Jr., Dorothy Day, Daniel Berrigan, and countless others," the letter said.

The letter was organized by Fordham Theology Professor Jeannine Hill Fletcher, who is mentoring Martin on his dissertation, which is about Jesuit Fr. Daniel Berrigan. Martin has already co-edited a book of letters between Berrigan and his brother, Philip, published in 2016 by Orbis Books, and has received one of Fordham's most competitive fellowships to complete his dissertation.

"We wanted not just to speak to the quality of his character, but to the wider commitment of being engaged in theology and activism in the public sphere," Fletcher told NCR about the letter. "This is the kind of scholar that the academy is crafting right now."

Martin, who has been active in Catholic Worker communities in New York, Washington D.C. and Charlottesville, said his actions stem from his faith and that he has been "trained for spiritual resistance."

"It was done with a rosary in my pocket," he said about his nonviolent resistance in the law library. "This is what it is for me to be a Christian, to resist things that are evil. White supremacy is evil."

But he points out that "I'm not the victim here" and instead wants more attention to two African American activists, Corey Long and Donald Blakney, who are facing more serious charges for defending themselves at the August "Unite the Right" rally.

As for Jason Kessler, the rally organizer (and UVA alum) who apparently was using the law library for research for his own upcoming lawsuits related to the rally, he has finally been banned from the school. UVA's Black Student Alliance and other student groups representing the campus's minority populations had been calling for such a ban since September.

But Martin also has been banned from the university, and library officials emailed him with instructions to meet at the police station to return the 20 books he currently has checked out. Among the titles: Martin Luther King, Jr., and the Theology of Resistance; Against the Tide: Whites in the Struggle against Apartheid and Church and Revolution: Catholics in the Struggle for Democracy and Social Justice.