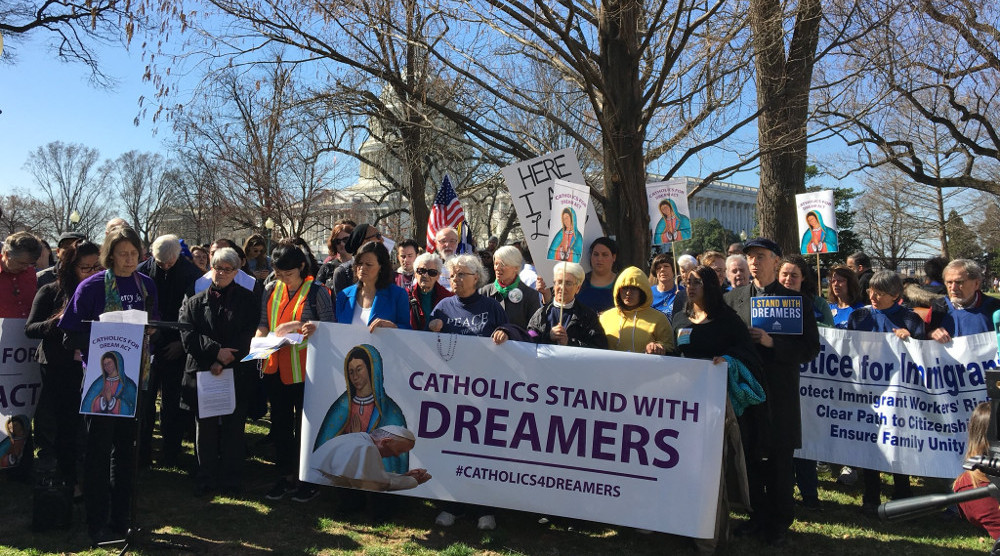 Catholic activists meet on the lawn of the Capitol to call for justice for immigrants during a National Catholic Day of Action with Dreamers rally on Feb. 27, 2018, in Washington. (NCR photo/Julie Bourbon)

On a brilliantly sunny and warm day here, in the shadow of the U.S. Capitol dome, more than 200 Catholic priests, sisters and laypeople gathered to support immigration reform and justice for young people brought to the United States illegally as children, known as Dreamers.

Billed as a Catholic Day of Action for Dreamers, the Feb. 27 event began with prayer and ended with 42 arrests for civil disobedience inside a Senate office building across the street. In between, a series of short, powerful speeches and prayers drew at times raucous cheers from the crowd.

Perhaps none was more stirring than that of Jesuit Fr. Tom Reese. Recounting the story of Paul on the road to Damascus, he called out Speaker of the House Paul Ryan (R-Wisconsin) for his inaction on immigration reform and led the crowd in a chant of "Paul, Paul, why do you persecute me?"

Reese was arrested about an hour later.

Adrian Dominican Sr. Elise García, from Michigan, also gave a spirited address to the crowd. García said she was risking arrest "as an act of solidarity," having been given permission by her community to do so. 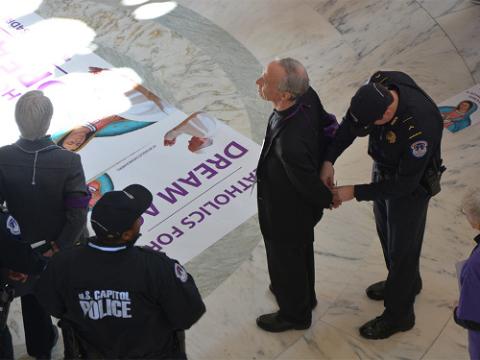 Jesuit Fr. Thomas Reese and other Catholic activists are arrested during a National Catholic Day of Action with Dreamers rally in the Capitol Rotunda on Feb. 27, 2018, in Washington. (RNS/Jack Jenkins)

"To members of Congress, I say, arrest a nun, not a dreamer," García said. She, too, was arrested.

The day's events had a particular urgency, as President Donald Trump had rescinded the Obama-era executive order establishing the Deferred Action for Childhood Arrivals (DACA) program, intended to protect Dreamers. That protection had been set to expire this coming Monday, March 5.

But yesterday the Supreme Court refused to hear an appeal from the Trump administration to end the program, thus leaving in place lower court rulings that blocked the administration from canceling DACA. This ends the immediate crisis, but leaves DACA recipients in limbo as Congress kicks the immigration can farther down the road.

None of the members of Congress present took the microphone today, leaving that instead to religious leaders and Dreamers, including Daniel Neri, a Catholic from Indiana.

"We are not criminals, we are not rapists," Neri said. "We are good people."

Bishop John Stowe of Lexington, Kentucky, calls current immigration policy "grave injustices against children of god" during a speech at the National Catholic Day of Action with Dreamers rally on Feb. 27, 2018, in Washington. (NCR photo/Julie Bourbon)

Bishop* John Stowe of Lexington, Kentucky, a Franciscan who has been outspoken in his support for immigrants and a clean immigration bill, addressed the crowd outside and gave a blessing inside, before the civil disobedience began.

Asked about the Supreme Court action (or inaction) of the previous day, Stowe said, "We have to keep the attention on this and not keep moving it to the back burner. It is not fair to the Dreamers, who live in constant fear of what's next."

"Immigration reform is our long-term goal," he said, adding, "Human dignity is not dependent on your status."

At one point, Stowe was deep in conversation with Suozzi, who seemed to have caught the spirit of the event.

"I am so moved and inspired by my church," Suozzi said as he looked around the rotunda before the arrests began. "This is what we need to do as a church and as a country."

The event followed a national Catholic call-in day to protect Dreamers that was organized by the U.S. Conference of Catholic Bishops. The effort received widespread diocesan support. Cardinal Joseph Tobin of Newark, New Jersey, wrote an op-ed in The New York Times calling for reform, and San Francisco Archbishop Salvatore Cordileone recorded videos in both English and Spanish, encouraging Catholics to call their congresspeople and voice support for immigrants.

The Washington event was organized by PICO National Network and Faith in Public Life, as well as members of the DC Catholic Coalition.

Dreamers are young men and women who were brought to this country illegally as children and who seek lawful, permanent resident status under the Dream Act. About two-thirds of the American public favors granting legal status to Dreamers, although the Dream Act of 2017 has not been passed by either house of Congress.

DACA, established in 2012, provides temporary lawful status with work authorization to approximately 690,000 young immigrants currently enrolled in the program. DACA recipients are a subset of the Dreamer population, which numbers approximately 3.2 million, according to the Migration Policy Institute. 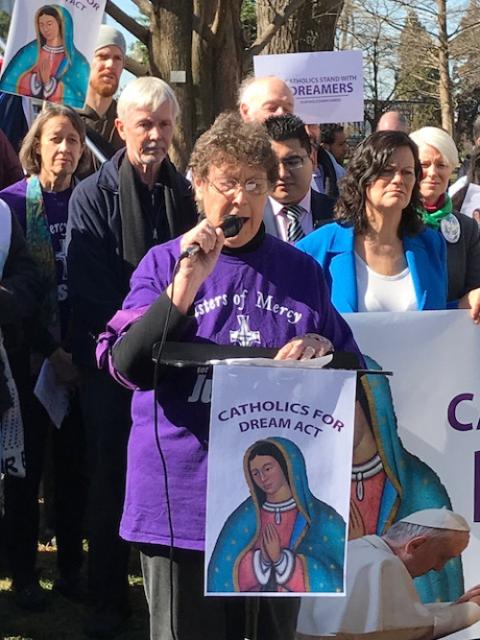 Mercy Sr. JoAnn Persch says Dreamers "are being used as pawns in a chessboard," and demanded a clean bill with pathway to citizenship during a speech at the National Catholic Day of Action with Dreamers rally on Feb. 27, 2018, in Washington. (NCR photo/Francis J. Butler)

Many of those in the crowd had traveled long distances to take part in the action, including three from a Jesuit parish in San Diego, Our Lady of Guadalupe.

Watching the arrests with the rest of the crowd were Jesuit Fr. N. José 'Pepe" Wilkinson; parishioner Marta Flores, who leads spiritual direction in both English and Spanish; and Katia Ortiz, a 25-year-old Dreamer from Mexico who is working on a master's degree in social work.

Then they walked to their congressman's office a few blocks away. Their goal was to present Rep. Juan Vargas (D-California) with more than 1,000 Valentines that parishioners had made for Trump.

"It's really hard spiritual work," Wilkinson said of praying for the president to have a conversionary experience about immigration. "If we hate him, he wins."

Thus the Valentines, which Vargas, who was a Jesuit in formation about 25 years ago, was happy to accept.

"I stand with the Dreamers," said Vargas, as he embraced his friend Wilkinson.

Then, turning to Ortiz, Vargas asked if she was a Dreamer. "What a difficult situation," he responded when she told him she was.

"It would be a disaster for our country if they [the Dreamers] left," he said.