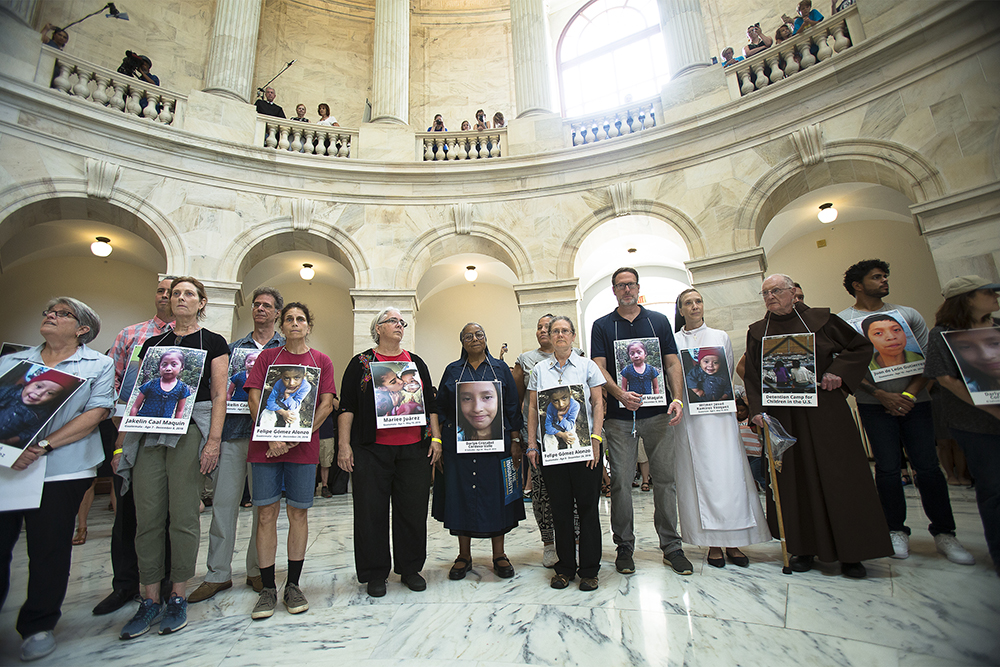 Catholic leaders and advocates protest the Trump administration's handling of detained immigrant children during a "Catholic Day of Action for Immigrant Children" July 18, in the Russell Senate Office Building in Washington. (CNS/Tyler Orsburn)

Stop the detention of immigrant children. Stop it now.

The message was made clear by hundreds of Catholics gathered on Capitol Hill the morning of July 18 for what organizers called a "Catholic Day of Action for Immigrant Children," as a coalition of Catholic groups began a nationwide campaign to end child detention with a prayer service followed by civil disobedience that saw 70 Catholic leaders arrested.

"It is our belief that it is time for the Catholic community at every level of the church to take bolder action to interrupt what is happening right now, and we see [the Day of Action] as a really important first step in that movement," Joseph Fleming, Faith in Action’s director of Catholic organizing and one of the lead organizers for the event, told NCR.

In 90-degree heat and holding the photos of the seven children who have died in immigrant detention facilities, leaders representing dozens of national Catholic organizations stood in unison on the Capitol lawn to express disgust at the government’s treatment of immigrant children and demand child detention be put to an end.

Following a press conference and prayer service on the Capitol lawn, Catholic leaders – including clergy, women religious and laypeople – walked across the street to participate in an act of civil disobedience and risk arrest for unlawful assembly in the Russell Senate Office Building rotunda.

Seventy leaders were arrested, according to a press release from Faith in Public Life, an event co-sponsor.

John Gehring, Catholic program director for Faith in Public Life and contributor to NCR, said that he was feeling "energized" heading into the act of civil disobedience.

"We’re in a really dark moment politically in our country and it’s easy to despair, but when you’re surrounded by Catholics who know that we have to put our faith into action, that fills me with energy and spirit," Gehring said.

At about 11:30 a.m., the group of protestors marched into the rotunda, each holding a photo of one of the seven dead children. Five of the demonstrators formed a human cross in the center of the room. 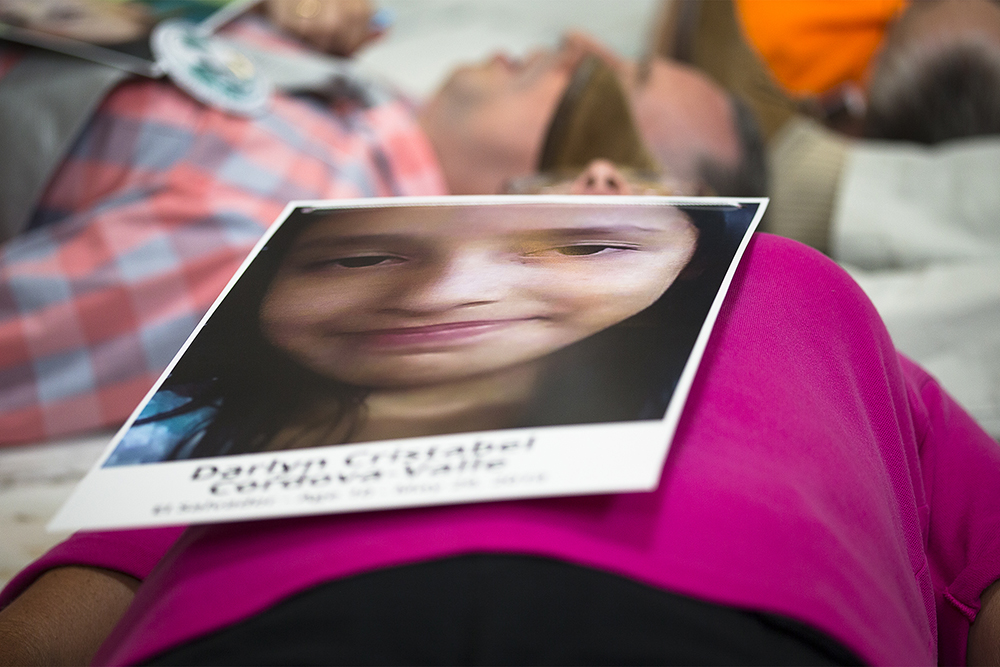 Catholic leaders and advocates lay on the floor of the Russell Senate Office Building July 18 in Washington, to protest the Trump administration's handling of detained immigrant children. (CNS/Tyler Orsburn)

Soon after the procession, U.S. Capitol Police gave the demonstrators three warnings to disperse before arresting them. The group recited a number of prayers and songs while the police officers detained and escorted them out of the building.

Patrick Carolan, executive director of Franciscan Action Network, was the first to speak at the prayer service. Carolan quickly drew attention to the images of the dead children, saying they are not rapists or murderers but, instead, "children of God."

"We are all responsible for idly sitting by and not rising up. We have sat by and allowed our faith, our Christian beliefs, to be hijacked by people claiming to be Christian. Yet they are preaching a gospel of hate and fear," Carolan said. "But now we can rise up. We can, as Pope Francis challenged us, be a part of a bold cultural revolution."

"We want to lift up those stories, lift up their faces, and pray the hearts and minds within the administration, within Congress, will be moved to stop this really inhumane practice of detaining children," Fleming said.

Franciscan Fr. Joseph Nangle, sought to communicate the urgency of the crisis by characterizing it as a historic and moral "struggle for the soul of America." 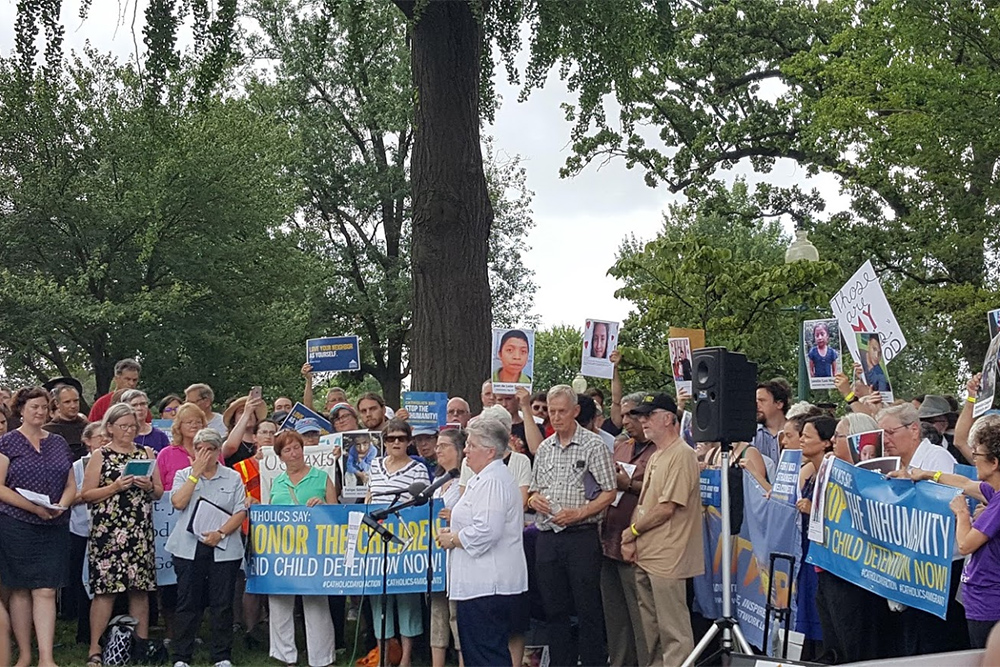 Sr. Carol Zinn, center at the microphone, executive director of the Leadership Conference of Women Religious and a Sister of St. Joseph of Philadelphia, speaks to the participants of the 2019 Catholic Day of Action about the need for a change in how immigrants are treated; Zinn drew on the Gospel story of the Good Samaritan. (GSR/Gail DeGeorge)

Sr. Carol Zinn, executive director of the Leadership Conference of Women Religious and a Sister of St. Joseph of Philadelphia, told the crowd that civilizations throughout history are not judged by "the strength of its economy, its military or its politics. No, civilizations and cultures have been judged and will be judged by the way we treat the most vulnerable, the marginalized, the poor and the oppressed among us."

Other speakers shared stories of immigrant journeys to the United States and living in constant fear of deportation.

"I stand in solidarity with all who seek to better their lives," Good Shepherd Sr. Gayle Lwanga Crumbley said. "The Catholic community has decried the treatment of children on our southern border, not only as a violation of human dignity and rights, but also contrary to religious teachings and the sacred call to care for people who are most at risk, especially children."

At one point, a chant broke out among some of the crowd asking, "Where are our bishops?" Though no bishops were present at the event, Sr. Deborah Troillett, a Sister of Mercy from Little Rock, Arkansas, read short statements from seven bishops across the country. She was asked by Bishop Anthony Taylor of the Diocese of Little Rock to read a statement from him, and other bishops also issued statements.

Social Service Sr. Simone Campbell, executive director of Network, a lobby for Catholic social justice, closed the service by leading a group prayer. "The conditions our children face at the border is a stark reminder, as we just heard, of the moral bankruptcy of our current immigration policy. It is wrong and it must stop," she said.

In an interview with NCR July 17, Campbell said the treatment of immigrants and asylum-seekers "feels like how the Jews in Nazi Germany were treated" and goes against "our faith" and the values of "our nation."

Organizers told NCR that the July 18 Day of Action is the first phase of a broader campaign to end immigrant child detention. Future similar large-scale actions are planned to occur at the border and in D.C. in August and September, with weekly vigils and witnesses to be held around the country between the larger actions.

According to Eli McCarthy, director of justice and peace for the Conference of Major Superiors of Men, the goal of the campaign "is to increase the visibility of Catholics who are willing to take more risk to significantly improve the treatment of migrant children and to end child detention."

McCarthy said that organizers believe increasing the visibility of Catholic leaders will spark more Catholics across the country to take similar risks and significantly increase pressure on the government.

The event was co-sponsored by 14 Catholic organizations including the Columban Center for Advocacy and Outreach, the Leadership Conference of Women Religious, Pax Christi USA, Sisters of Mercy of the Americas, and the Jesuit Conference Office of Justice and Ecology.

Read this next: Across US, 'Lights for Liberty' shine in solidarity with immigrants
A version of this story appeared in the Aug 9-22, 2019 print issue under the headline: Catholic protesters arrested in stand against child detention.