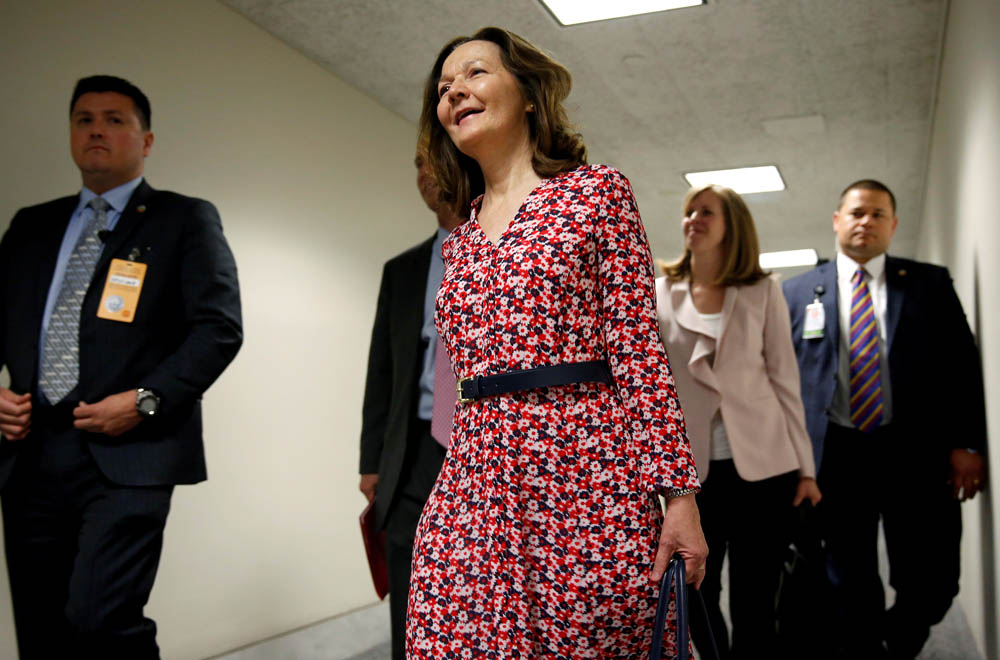 Nominee for director of the Central Intelligence Agency Gina Haspel arrives for meetings with senators on Capitol Hill May 7, in Washington. (Newscom/Reuters/Joshua Roberts)

Editor's Note: This story has been updated with additions from a letter by Sen. Dick Durbin and a letter from former ambassadors.

The move marks a rare instance of Catholic activists opposing a government nominee, rather than addressing specific policy questions.

"Confirming someone who actively supervised torture to be CIA Director would send a very unhealthy, unethical, and anti-rule of law message to the world," said a May 7 letter sent to all U.S. senators ahead of Haspel's confirmation hearings, which begin Wednesday.

"Our friends and allies would question our opposition to torture, and tyrants and dictators would once again point to us to justify their own use of torture," the letter said.

The letter was signed by Pax Christi USA, a national Catholic peace organization, and groups representing religious men and women, including the Conference of Major Superiors of Men and Network, a Catholic social justice lobby.

Other signers included the Franciscan Action Network, Maryknoll Office of Global Concerns, National Advocacy Center of the Sisters of the Good Shepherd, USC Province of the Society of the Sacred Heart and the Institute Justice Team of the Sisters of Mercy of the Americas.

"Catholic social teaching is clearly against the practice of torture because it violates human dignity, and it is certainly not in accord with Jesus' way of reconciliation and love of enemies," Eli McCarthy, director of justice and peace for the Conference of Major Superiors of Men, told NCR.

Concerns about Haspel, deputy director of the CIA, center on her overseeing of "a secret CIA detention facility in Thailand where interrogators waterboarded two al-Qaeda suspects" in 2002, and her involvement in the destruction of videotapes, without White House approval, of those interrogations to protect the CIA personnel and their families, according to press reports.

The first woman to be nominated to head the CIA, Haspel has worked undercover for most of her 33 years at the agency, which means most information about her past is classified. On Friday, May 4, she offered to withdraw from the nomination, but was persuaded by White House officials not to drop out.

According to CIA records cited in the letter to senators, interrogators at the Thailand site were at times at "the point of tears and choking up" and "likely to elect transfer away from the site."

"There is no indication, however, that Ms. Haspel attempted to stop the use of torture at the site — indeed she may have been transferred there to tamp down on concerns the interrogators at the site had over the legality of the techniques being used," the letter said.

President Donald Trump has expressed interest in lifting current restrictions on torture, and Haspel's confirmation could send a message of U.S support for previously banned interrogation techniques, say those who oppose her confirmation.

In a related action, Sen. Dick Durbin (D-Illinois), vice chair of the Defense Appropriations Subcommittee and the Democratic Whip, questioned the "aggressive" lobbying the CIA has done to promote Haspel's nomination. 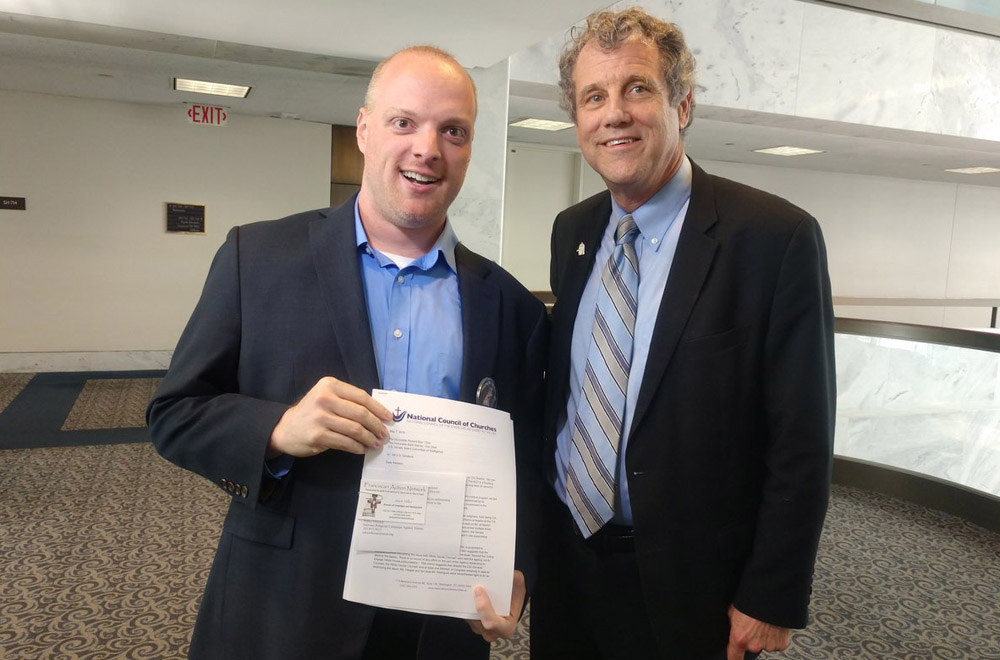 Jason Miller, left, of Franciscan Action Network delivers a letter from Catholic groups opposed to Gina Haspel’s nomination to head the CIA to Sen. Sherrod Brown of Ohio May 8. (Photo from Twitter)

Another concern of the letter-writers is for U.S. Catholic pastoral and humanitarian aid workers overseas, who would be "distrusted and endangered" if Haspel is confirmed.

For example, Maryknoll has priests, brothers, sisters and lay missioners in more than 30 countries overseas, including some where torture occurs.

"There are times when you need to speak clearly about your lived experience," said Susan Gunn, communications for Maryknoll's Office for Global Concerns. "Silence would be complicity."

The National Religious Campaign Against Torture, or NRCAT, also has opposed Haspel's nomination, calling it "morally repugnant" that she would be elevated to head the CIA.

"Haspel cannot be trusted to follow the law, nor represent our country's fundamental values of ethical government and transparency," said Rev. Ron Stief, NRCAT executive director in a March 13 statement.

Letters from Protestant and Jewish leaders opposing Haspel's nomination also were delivered to senators on Tuesday. Also speaking out against her confirmation are human rights organizations, retired military officers and the American Psychological Association.

Durbin's concern was the "extensive public relations campaign" using CIA resources to promote Haspel's nomination. "These efforts to promote a national security nomination appear to be without precedent in recent history,” Durbin wrote in a May 8 letter to Dan Coats, director of National Intelligence.

"We must consider whether our intelligence agencies should conduct public affairs campaigns aimed at a co-equal branch of government," Durbin wrote, noting that using appropriated funds to try to influence action on legislative matters is illegal, although those laws do not specifically apply to nominations.

As Haspel's hearing got underway Wednesday morning, 115 former ambassadors also released a letter expressing concerns about her connections to use of "enhanced interrogation techniques" or torture.

Her confirmation would "undercut the work of countless diplomats, military service members, and intelligence professionals who continue to engage with their foreign counterparts on why the United States believes that torture and other forms of abuse are not only morally wrong, but strategically shortsighted and legally impermissible," the letter said. "In an era in which the rule of law is under considerable strain around the world, this is a cost we can ill afford."

McCarthy would like to see more attention from Catholics on torture and related issues. Instead, some Catholic decision-makers have had a role in legitimizing such practices, he said.

"I think we can have a better witness as Catholics," McCarthy said.