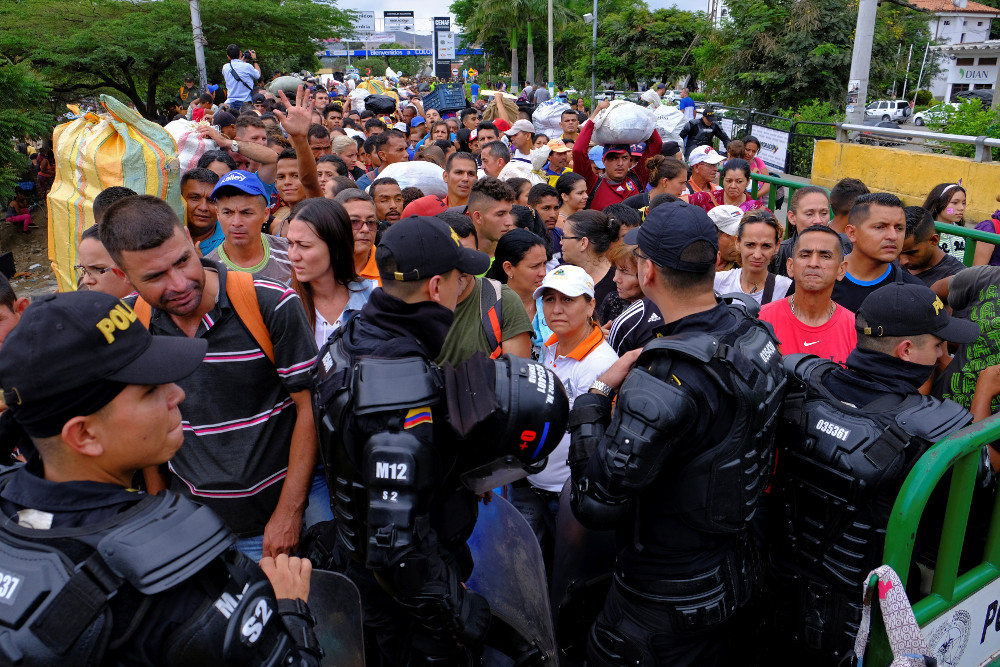 Colombian riot police block the way to the Colombian side in the Colombian-Venezuelan border in Cucuta April 2, 2019. (CNS/Ferley Ospina, Reuters)

With the "ongoing political unrest, violence and shortages" in Venezuela causing millions of citizens to flee their country, the U.S. government should designate temporary protected status for that country, U.S. Catholic officials said.

The chairman of the U.S. bishops' migration committee and the head of Catholic Relief Services urged this designation be put in place for 18 months in a letter to Secretary of Homeland Security Kirstjen Nielsen and Secretary of State Michael Pompeo.

A copy of the letter was released late April 4 by the U.S. Conference of Catholic Bishops.

"There is no current TPS designation for Venezuela. However, conditions in the country and existing political instability have created a situation in which Venezuelan nationals cannot be safely returned home at this time," wrote Bishop Joe Vásquez of Austin, Texas, who is chairman of the bishops' conference Committee on Migration and Sean Callahan, CEO of Catholic Relief Serivces, which is the U.S. bishops' overseas relief and development agency.

Temporary protected status is a temporary, renewable, and statutorily authorized immigration status that allows individuals to remain and work lawfully in the U.S. during a period in which it is deemed unsafe for nationals to return to their home country.

Vásquez and Callahan cited reports from the Justice and Peace Commission of the Venezuelan bishops' conference detailing "numerous violations of fundamental human rights inflicted by the country's police and the violation of citizens' access to health and medicine."

"As you well know, while stability in Venezuela has been tenuous since 2015, it is continuing to deteriorate at an alarming rate," they said, pointing to the State Department's own "do not travel" advisory issued March 12, 2019.

They noted that this advisory came just a day after the State Department "announced that it would be temporarily suspending operations at the U.S. Embassy in Caracas and withdrawing diplomatic personnel from the country."

In addition to violent political demonstrations and shortages in basic necessities — food, water, electricity, and medical care, "the country suffers from high rates of violent crime, such as homicide, armed robbery and kidnapping," Vásquez and Callahan said. "These well-documented conditions have also been seen firsthand by our Catholic partners on the ground."

"At this time, it is vital that Venezuelans in the United States have an opportunity to live with dignity, work lawfully, and provide for their families' well-being until they can safely return home," they said. "Our nation has the legal ability, as well as the moral responsibility, to provide Venezuelans in the U.S. with temporary protection."