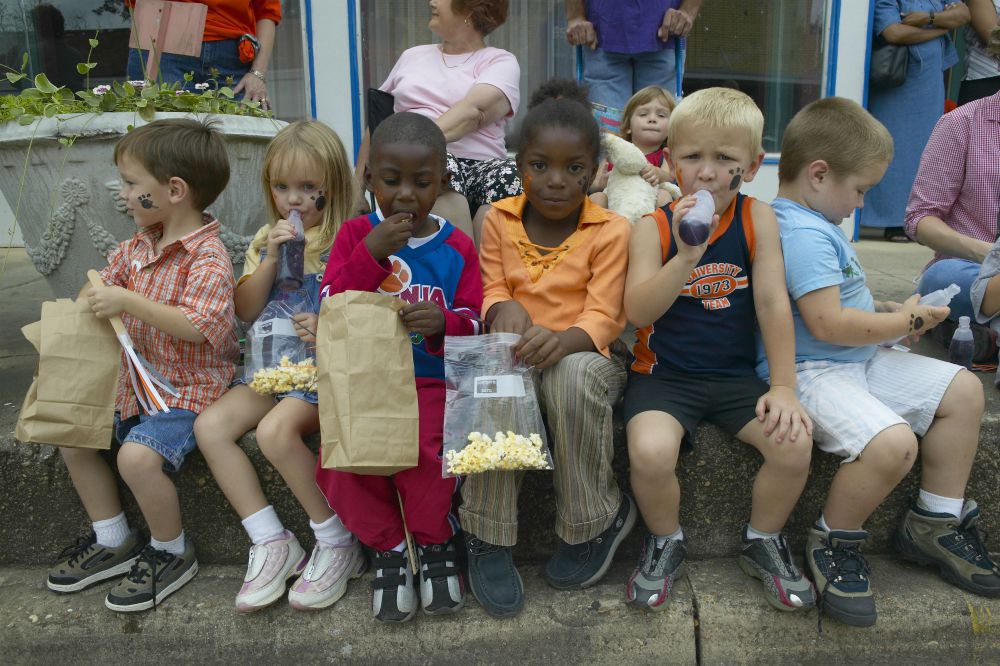 Children at a parade in Georgia, 2004 (Dreamstime)

A program that provides low-cost health insurance to nearly 9 million children in the United States is facing a Sept. 30 deadline for renewal of its federal funding. Some families could start receiving cancellation notices as early as next month if funding is not extended.

Although the state-administered Children's Health Insurance Program (CHIP) has enjoyed bipartisan support since its creation in 1997, Catholic poverty experts are worried it may become the victim of partisan fighting over other healthcare issues, including attempts to repeal the Affordable Care Act (ACA).

Senate leaders reached a deal on the CHIP program last week and introduced the Keeping Kids' Insurance Dependable and Secure Act (KIDS) this week to reauthorize CHIP funding for five years, but the proposal of the Graham-Cassidy ACA repeal bill may derail the children's program — not to mention other bipartisan work to make positive changes to the ACA.

The Children's Health Insurance Program "is as American as apple pie," said Lucas Allen, a healthcare fellow at NETWORK, a Catholic social justice lobbying organization. "We support these kinds of bipartisan compromises that are too rare in our health care debate right now."

However, prioritization of ACA appeal legislation makes it "very unlikely" the Senate will extend CHIP funding before the deadline, Allen said.

CHIP provides low-cost health coverage to children in families that earn too much money to qualify for Medicaid. It covers about 8.9 million children, while Medicaid covers nearly 30 million children nationwide. The Graham-Cassidy bill would include drastic cuts to Medicaid and other federally-funded insurance.

"From our standpoint, you can't talk about a bipartisan CHIP at the same time you're going forward with a partisan effort to deeply cut Medicaid, which covers four times as many children," Allen said.

NETWORK was one of several Catholic groups to sign a letter earlier this month from 28 Christian, Jewish and Muslim faith organizations urging reauthorization of CHIP funding as "part of our sacred obligation to care for one another."

"While we come from different faith traditions, we share a moral vision of a health care system that offers health, wholeness and human dignity for all. Our scriptures and sacred teachings inspire a special concern for those experiencing vulnerability, such as children," the Sept. 6 letter said.

"We believe that no family should have to face the terrible decision between putting food on the table, paying rent, or providing health coverage for their child," the letter said.

In their home visits with clients, members of the Society of St. Vincent de Paul see the long-term effects of untreated childhood illnesses, which can feed into the cycle of poverty with lost educational and job opportunities, addiction and other problems.

"We deal with the consequences, on almost a daily basis, of anyone who isn't insured or is underinsured," said Sheila Gilbert, president of the society's national council. "When the health bills add up, then there isn't money for rent, food or transportation."

Much of the St. Vincent de Paul Society's assistance goes to folks caught in the "aftermath of what happens when you don't take care of people's health," she said.

Supporters praise CHIP's success in getting children the healthcare they need. Since the program's creation in 1997, the rate of children without health insurance has fallen from 15 percent to a record low of 5 percent, according to a study by the Henry J. Kaiser Family Foundation.

"CHIP has a proven health record in ensuring that our children have access to needed health care services. We cannot make a better investment than in the health of our children," Larry Couch, director of the National Advocacy Center of the Sisters of the Good Shepherd, said in a statement.

A number of women's religious communities signed the letter of support for CHIP, in part because they are involved in healthcare ministries, said Holy Cross Sr. Joan Marie Steadman, executive director of the Leadership Conference of Women Religious (LCWR).

"As women of faith, we take seriously the gospel call to care for those in need and we are committed to a faith-filled vision of healthcare that guarantees health and dignity to all, especially to children," Steadman said in a statement.

The Sisters of St. Joseph of Carondelet support CHIP because it "is one of the most effective 'safety net programs.' It gives all children an equal opportunity to have a healthy start to life," said Sr. Danielle Bonetti of the congregational leadership team.

Extending CHIP funding is a moral priority, Allen of NETWORK said. "In the wealthiest nation on Earth, we don't believe there should be people — and kids — who don't have access to the health care they need," he said.

"Health should not a privilege for the few, but a right," he said. "Health care is a communal good. Everyone is better off when everyone is healthier. "

Advocates were initially encouraged by last week's bipartisan Senate deal, which extended the program's funding for five years, although eventually shifting an increasing portion of the financial burden to states. But now some advocates are concerned that children's health could be used as bargaining chip in the ACA repeal debate.

"Congress must not allow the needs of our children to get caught up in partisan politics here in D.C.," Social Service Sr. Simone Campbell, executive director of NETWORK, said in a statement.

Gilbert of the Society of St. Vincent de Paul is hopeful that Congress will listen to constituents for whom this is an urgent issue. "I hope they have the strength of will to do what's right," he said.