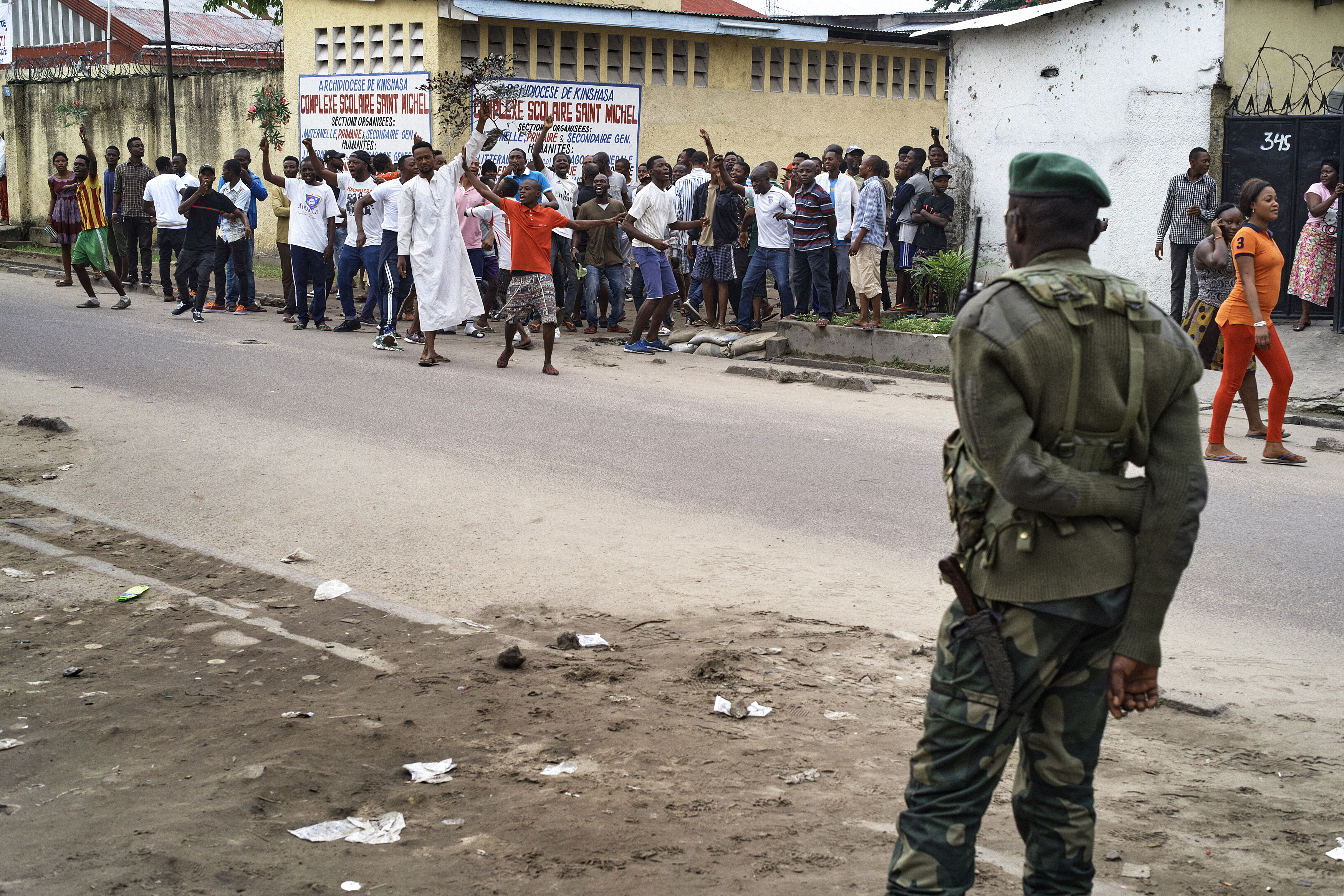 Protestors attempt to leave the safe heaven of a church in late January during violent protests that left at least five people dead and scores injured in Kinshasa, Congo. (CNS/Robert Carrubba, EPA)

The recent kidnapping of a Congolese priest illustrates some of the problems the Catholic Church has faced during the prolonged conflict.

Fr. Celestin Ngango of St. Paul Karambi Parish in the Diocese of Goma was kidnapped by armed men April 1. He was leaving a parish after celebrating Easter Mass when the abductors pulled him out of a vehicle and ordered him to follow them into the bush.

"The conference recalls that priests are people of God consecrated to serve others," he said.

Contacted for an update of the situation, the bishops' conference pointed to its April 3 statement.

Initially, the kidnappers asked for "the absurd sum of $500,000," Bishop Theophile Kaboy Ruboneka of Goma told Fides, news agency of the Congregation for the Evangelization of Peoples. "Now they are asking for $50,000, but where can we find such a sum? It is impossible."

"We are trying to talk to the kidnappers, but it is not easy. ... We have no way of contacting them," Kaboy Ruboneka told Fides.

Ngango 's abduction brings to six the number of priests kidnapped since 2012 in eastern Congo. Last July, Fathers Jean-Pierre Akilimali and Charles Kipasa were abducted from their parish in North Kivu province. During the militia attack on the parish, several rooms were destroyed, and the local population was terrorized.

In October 2012, three Assumptionists priests, Fathers Jean Pierre Ndulani, Edmond Kisughi and Anselme Wasukundi, were kidnapped from their parish in Mbau and have never been found.

Kaboy Ruboneka said the latest kidnapping is one of the many daily incidents related to human trafficking in the region. An estimated 100 militias -- local and those armed by foreign powers -- are believed to operate in the region, which experienced violence and instability for nearly two decades.

With the government failing to exercise any meaningful control in the region, civilians in Congo's North Kivu region, which borders Rwanda and Uganda, have been brutalized by militias, rebels and military units. Thousands of women have been raped by the armed groups.

Priests fighting for human rights also have been killed. In March 2016, Father Vincent Machozi, a priest who had frequently denounced the illegal exploitation of resources in the region, was assassinated. Other priests murdered in the area include Fathers Romain Kahindo in 2002 and Christian Mbusa in 2010.

Analysts say competition for mineral resources is the key factor fueling the violence, but recently succession politics added to the troubles.

Challenging what they termed as an "illegal" third term for President Joseph Kabila and recently moving to broker a deal between the government and opposition parties, the Catholic Church has found itself targeted. Churches, convents and Catholic schools have been vandalized or looted by armed groups.

In the April statement, Nshole called on authorities to ensure the protection of citizens and their property throughout the country, particularly in North and South Kivu.