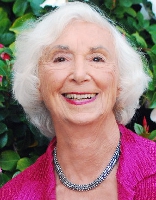 Barbara Marx Hubbard, an evolutionary thinker who is to speak this week before the Leadership Conference of Women Religious, is not Catholic or part of any mainstream religion. But she says she has faith in the future.

She will bring this message of hope to LCWR when she delivers the keynote address at the organization’s annual meeting Tuesday through Friday in St. Louis. The audience is likely to still be reeling from the criticism in a Vatican assessment that has shaken communities of sisters throughout the country.

“It’s a message of hope, of cooperation and alignment,” Hubbard said of the ideas she will explore in her speech. “How can we align that impulse to the deeper impulse of Christ in evolution, of God in evolution?”

Hubbard, who spoke recently in front of a couple of congregations of Catholic sisters, said she felt that her impulse to look toward the future and toward evolution was aligned with the “spiritual impulse of faith and trust and love” that she sees in the sisters, who are always working to meet society’s needs.

“I felt that they were true evolutionary leaders,” Hubbard said, describing a “sense of synthesis and synergy” she saw in the sisters. “I felt, in some respects, that I had come home, to a family.”

Sr. Annmarie Sanders, LCWR’s associate director of communications, said the organization invited Hubbard to speak in order to get her perspective “on the context of the world in which women religious are living and ministering.”

But Sanders added that Hubbard’s is “one among many perspectives women religious would be considering as they [look] to the future of this life and how the life can best serve the needs of people today.”

Sanders, a member of the Congregation of the Sisters, Servants of the Immaculate Heart of Mary of Scranton, Pa., serves on NCR’s board of directors.

Part of the Vatican order to LCWR calls for a review of the speakers to the group’s annual conferences. The Vatican’s doctrinal assessment found that “Addresses given during LCWR annual Assemblies manifest problematic statements and serious theological, even doctrinal errors.”

Catholic theologians familiar with Hubbard’s work, however, find much to recommend.

Hubbard, who is 82 and lives in Santa Barbara, Calif., is a mother and grandmother, educator and activist, author of several books, subject of a new book titled The Mother of Invention, and a former nominee for the U.S. vice presidency (she would have shared the 1984 ticket with Walter Mondale).

But she is best known for founding “conscious evolution,” a worldview that she says was inspired in part by Catholic theology. It is based on the belief that as members of a global society linked to one another by the Internet and social media we are becoming more aware of the world around us and more willing to change it for the better.

“If somebody is suffering in Africa, we feel it. If there’s a tsunami in Japan, we know it, we feel it, we want to care for each other,” Hubbard said. “I feel that we are an evolving species, and that the type of humans that are being born in all these different experiences are trying to make a better world in any possible way.”

Hubbard, who was raised in a nonreligious Jewish family, began her search for spiritual meaning in her youth. She said she began to find the answers to her questions in the writing of Pierre Teilhard de Chardin, a French Jesuit priest, theologian and paleontologist who would become one of the biggest influences on her work.

Teilhard, who died in 1955, wrote of a “thinking layer of Earth” called a “noosphere,” Hubbard said, and that prediction is today’s reality.

“Here we are in 2012, we now have a noosphere: It’s Facebook, it’s Twitter, it’s the 5.7 billion cell phones, texting,” Hubbard said. “The planet has grown a new nervous system in the last 50 years, and this nervous system connects us.”

Catholic theologians familiar with Hubbard and her writing on “conscious evolution” say there is, indeed, a link between her work and Teilhard’s.

Though Teilhard’s writing was not without critics in the Vatican, it had a significant impact on the Second Vatican Council, said John Haught, senior fellow in science and religion at Georgetown University’s Woodstock Theological Center in Washington.

“Teilhard would find in Barbara a kindred spirit,” Haught said. “He thought that the basic division in humanity is not between believers and nonbelievers, but between those who hope and those who do not.”

Franciscan Sr. Ilia Delio, a senior research fellow in science and religion at Woodstock Theological Center, said Hubbard is a “forward thinker” who, during the LCWR meeting, may call on women religious “to be more creative and engaging in our life and the way we think about God and creation.”

“I think she might say that we are in a new age, knowing ourselves to be in evolution, and certainly for religious women, this is a very different awareness than where religious life evolved in a static universe, and developed within the parameters of a static universe,” Delio said. “And we no longer live in that universe, we live in an evolutionary one.”

[Alice Popovici is an NCR contributor. Her email address is apopovici@ncronline.org.]

NCR will be reporting live from the LCWR assembly all this week. Check daily for coverage. For related coverage on the gathering, see: