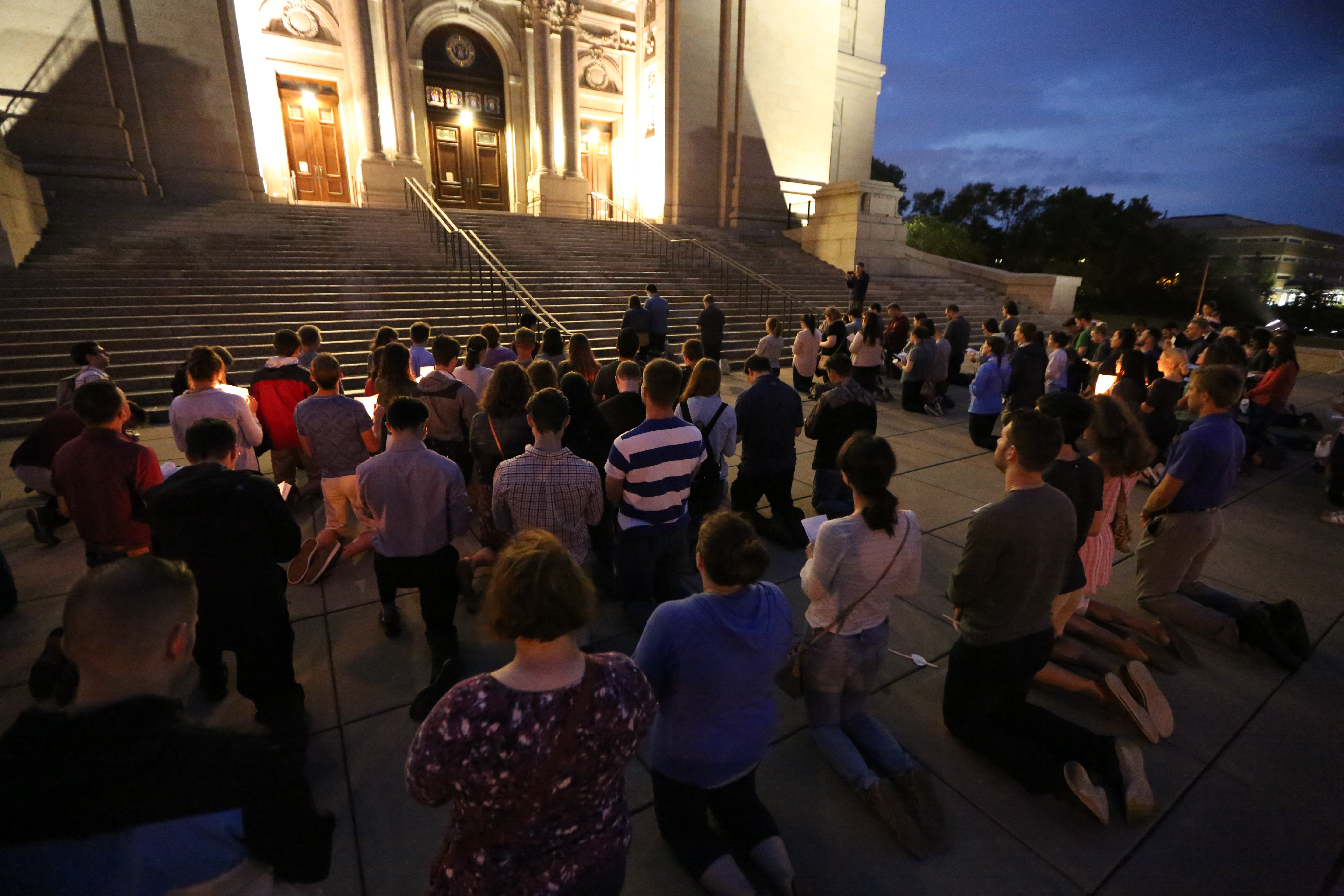 About 120 young adults kneel and pray at the Cathedral of St. Paul, Minn., Aug. 20 during a vigil called "Evening Prayer for the Survivors of Clerical Abuse and the Healing of the Church." It is part of an effort to pray, educate, dialogue and gather together in response to recent revelations of clergy sexual abuse and the ongoing crisis in the church. (CNS/The Catholic Spirit/Dave Hrbacek)

As the sun set Aug. 20, about 120 Catholics gathered on the steps of the Cathedral of St. Paul to pray for survivors of clergy sexual abuse and for a cleansing of the Catholic Church.

Among them was Pennsylvania native Corey Furdock, for whom the grand jury report issued Aug. 14 detailing clergy sexual abuse claims in that state hit especially close to home.

"My childhood priest was on the list, and it [abuse] was speculated back when he was removed in 2006. He just kind of disappeared," said Furdock, 27, a parishioner of the Basilica of St. Mary in Minneapolis.

"It's been really difficult," he added. "Here, it's a national headline that I think everyone can grieve [about], but being from there, having that relationship to the church ... it's painful."

The prayer vigil included evening prayer from the church's Liturgy of the Hours and petitions related to abuse survivors and the scandal.

Many attendees held candles. Most were in their 20s and 30s and came from parishes across the Twin Cities.

A group of young adult Catholics has been meeting for informal discussions in the wake of recent clergy sexual abuse revelations, including the Pennsylvania report, credible allegations of abuse against Archbishop Theodore McCarrick, and accusations of sexual harassment against a former vocations director in the Diocese of Lincoln, Nebraska, who died in 2008.

Those gatherings led a few attendees to organize the Aug. 20 vigil, after discussions sparked a desire to bring people together to pray for the abuse victims and the church.

They spread news of the event by word-of-mouth and social media. "We don't know where to begin. So join us for evening prayer and intercessions," began the Facebook invitation. "It will be a simple evening on the steps of the cathedral to pray for the Lord's healing, mercy, justice to be made present in these dark times. It is also an opportunity for us, as young adults, to band together and not be swayed by the evil that is so clearly present."

"The fact that there were so many people here, I think is a really huge sign of hope that people haven't become so bitter that they don't want to pray for the church anymore," said Jenny Lippert, 26, a parishioner of St. Paul in Ham Lake, about the vigil.

In the intercessions, the young adults prayed for healing for abuse victims, the souls of deceased victims who committed suicide, the cleansing of the church, sorrow for sins, for righteous anger, the courage to take action, and an "end to deceit and abuse" among church leadership. They also prayed for clergy and religious men and women to be inspired and for the Lord to inspire more holy vocations.

"I thought it was especially important to pray for survivors of clerical abuse first and foremost, that being our mission as members of the church: to open our hearts to a deeper level of compassion and understanding," Moore told The Catholic Spirit, the archdiocesan newspaper.

Jenny Lippert's husband, Jonah, said he appreciated that the petition response was "Lord, save your people and heal your church."

"It wasn't like, 'We're going to fix this' [or] some angry mob is going to riot and force, impose their will in some vengeful way," he said. "It was a sense of what we need is the love of God, and he's guiding the church, and his Holy Spirit's going to take care of things, and we're looking forward to that."

Gathering for prayer didn't negate the feelings of pain many Catholics are experiencing in response to the recent scandals.

"It was disturbing and very disheartening to hear that it was happening … behind closed doors in our church," said Katy Manders, 24, a parishioner of St. Agnes in St. Paul who attended the vigil, about sexual abuse in the church.

Four priests, including cathedral rector Fr. John Ubel, attended the vigil, as did Archbishop Bernard Hebda, who prayed in the back of the crowd. Fr. Paul Baker, parochial vicar of St. Vincent de Paul in Brooklyn Park, decided to attend, at the invitation of another priest, to personally offer reparation for sins committed by clergy against children and for failures in the church to prevent abuse.

"It's just completely tragic and awful, just to see what has gone on," Baker told The Catholic Spirit. "I really just think it would behoove all dioceses and religious orders just to completely come clean with what they have, so we can definitively put this behind us."

After the prepared petitions, some young adults, including Furdock, came forward to voice their own prayers regarding the clergy sex abuse crisis. He said he believes the prayer vigil was a step the laity need to take in facing the crisis.

"It was beneficial to get together with the Catholic community here [in the Twin Cities], which is super strong," he said, adding that he found hope in "the fact that [young adults] would put this on [and] take the time to do that out of their busy weekday schedule, and to simply offer up prayers for all those that are abused and to ask for shedding the light."

"That's what I think most Catholics are looking for," he said.