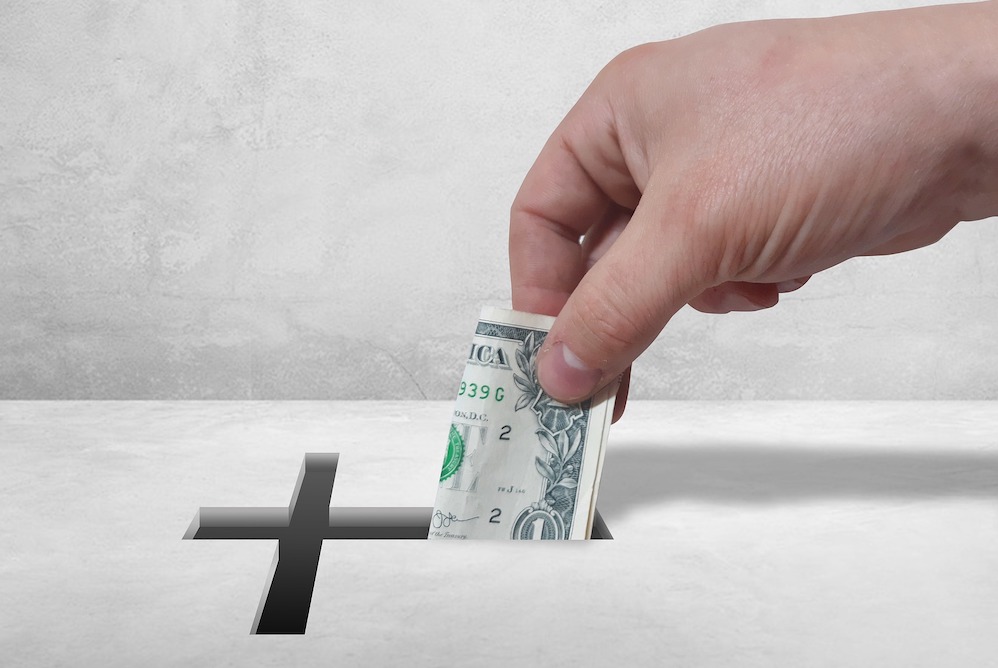 A parish in Diocese of Rockville Centre is recovering from high expenses under its former pastor, Fr. Charles Mangano, who was removed in mid-2018. And some parishioners say that there has been retribution for their questioning. (Pixabay/JeffJacobs1990)

The gist of a meeting on a late February weeknight at St. Joseph Parish in Babylon, New York, is probably familiar to many Catholic churches across the country, as Fr. Jason Grisafi, the pastor, discussed how St. Joseph could meet its expenses in light of steadily declining contributions, a drop exacerbated during the last year by COVID-19.

The meeting, however, was remarkable, given St. Joseph's recent history. For one, it was livestreamed and a video of it was posted on the parish's website, which also contained St. Joseph's latest financial report.

That transparency stands in stark contrast to the alleged opacity that marked the tenure of the previous pastor, Fr. Charles Mangano, who has moved on to a new assignment but has left behind unanswered questions about his financial stewardship at St. Joseph.

For a variety of reasons, very few parishioners are willing to discuss what happened at St. Joseph. The only one willing to do so with his name attached, Deacon Stephen Yusko, says he's being punished for his candor.

"I think there is a culture of secrecy that has greatly damaged the church," Yusko told NCR. "Unfortunately, even with the sex-abuse scandal and everything else, this notion of a 'corporate Jesus,' and to do everything to protect this corporation above all is what damages [the church's] credibility."

Yusko is now fighting efforts by the Diocese of Rockville Centre to laicize him for what he says is whistleblowing about Mangano. (Separately, the diocese filed for Chapter 11 bankruptcy protection in November because of the costs of settling sex-abuse litigation.)

At the center of the hubbub at St. Joseph's is Mangano, who's a bit of a mini-celebrity on Long Island because of his music ministry and appearances on Telecare (now the Catholic Faith Network), a local television network. But according to multiple accounts, Mangano wreaked financial havoc on St. Joseph's during his time as pastor there from 2016 to 2018.

With his celebrity, Mangano brought his own following to St. Joseph's. Since the 1990s, he and his sister, Laurie, have run Mater Dei Music Ministry, producing more than a dozen CDs and holding many concerts, nights of recollection and Easter and Christmas shows over the years in churches across Long Island and in larger venues. They have raised over $400,000 for charities such as the Life Center of Long Island, a pregnancy-resources center, according to a promotional video on the ministry's website.

Before Mangano arrived, St. Joseph's was a financially strong parish, according to multiple sources familiar with the matter, thanks in large part to a $1.2 million endowment that a widow bestowed upon the parish in 2009. The money was put into an investment account that held ultra-safe certificates of deposit, a source said.

These sources requested anonymity because of the sensitive nature of the issue and because of alleged threats made to parishioners who have spoken up.

In the summer of 2016, Mangano allegedly began a series of expensive projects. According to sources, he refurbished a guest apartment in St. Joseph’s rectory, moved the parish’s outreach ministry from the rectory to a decrepit convent on the church’s property that had been deemed unfit for use, had brass railings installed outside the church as well as a handicap-accessible ramp outside the rectory for his parents and the elderly secretary who commuted from Connecticut to work for Mangano, and purchased fancy ornamental items such as golden bells for the altar.*

Furthermore, Mangano allegedly flouted diocesan rules on finances by not informing the parish's finance committee of purchases of over $10,000 not already budgeted, and by not telling the diocese about and obtaining at least three bids for contracts exceeding $25,000, according to the sources from the parish.

By January 2017, eight months after his arrival at St. Joseph's, he had spent $384,000, according to multiple sources. That prompted a group of whistleblowers at the parish to embark on a letter-writing campaign to the diocese, detailing Mangano's alleged financial improprieties.

"It is our opinion that our parish is being slowly decimated and reduced to an empty spiritual shell," one letter to diocesan officials read. "What was once a vibrant parish has been reduced to staff that fears for their jobs, ministry leaders forced to make changes without conversations and angry resentful parishioners. Many of our parishioners are either leaving the parish or refusing to make contributions to the parish. Many of the parishioners are confused, angry and unhappy with the goings on under the new pastor. They feel alienated and disregarded as our pastor continues to make decisions without input and spend down our assets."

Clip from bulletin of St. Joseph Roman Catholic Church, week of May 28, 2017, page 8, showing announcement of a program with Fr. Charles Mangano and his sister Laurie Mangano (NCR screenshot)

Then-Msgr. Richard Henning — who was the vicar of the vicariate that oversees St. Joseph's and who is now an auxiliary bishop — investigated the matter, and according to a letter from Henning, agreed that Mangano wasn't following diocesan protocols about informing diocesan officials about large expenditures but concluded that the priest hadn't committed financial fraud.

Henning didn't return a request from NCR for comment. Sean Dolan, spokesman for the Diocese of Rockville Centre, said in a statement emailed to NCR, "A financial audit of the Church of Saint Joseph in Babylon was conducted which revealed no evidence of financial malfeasance."

The diocese removed Mangano from the parish in June 2018. But the alleged damage had been done. According to the parish's 2017 financial report, obtained by NCR, the parish's deficit swelled to $576,634 in the fiscal year that ended Aug. 31, 2017, up from $46,482 the previous fiscal year. To make up for the shortfall, the parish used money from its investment account, which had been only lightly tapped into before. According to a source who has seen the account's statements, the account was depleted by up to 75% because of Mangano's alleged excessive spending.

Meanwhile, Mangano or his supporters, according to sources, sought retribution on the whistleblowers. The tires on the car of one whistleblower were slashed twice after the diocese was appraised of Mangano's alleged financial misdeeds, and a website, SaveSaintJoseph.com, was stripped of all its content after the people who put up the site received a threat that their families would be harmed unless the site was quashed. Those behind the website did not wish to be interviewed, and Dolan, the diocesan spokesman, declined to comment directly on the alleged retaliation, instead referring to his statement that the diocese found that Mangano didn't commit any financial malfeasance.

Mangano didn't return a request for an interview. Last summer, he was appointed associate pastor at Our Lady of Lourdes Parish in West Islip, New York, which is only 3 miles from St. Joseph's, rankling the whistleblowers. Between appointments he helped take care of his elderly parents.

Yusko, in the meantime, is battling to keep his diaconate ministry. According to his account, the Diocese of Rockville Centre is trying to laicize him for using social media "to rail at or excite hatred or contempt" against the church. But his supporters — including more than 250 who signed a petition for his preaching ministry to be instated — call him a man of integrity and deep faith who is being punished for "doing the right thing." 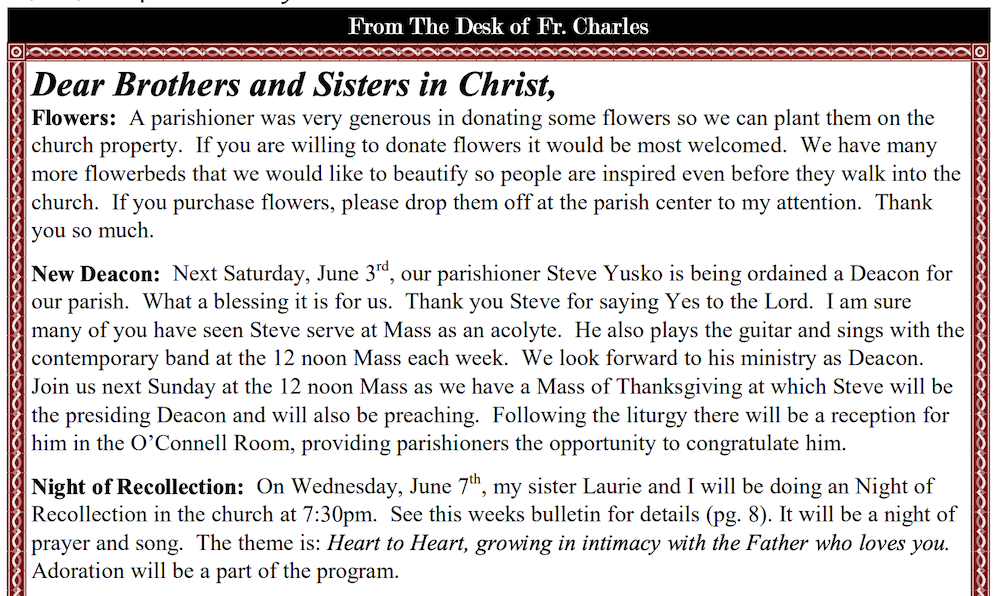 Clip from bulletin of St. Joseph Roman Catholic Church, week of May 28, 2017, page 2, showing Fr. Charles Mangano's "from the desk of" feature that includes an announcement of the June 3 ordination of Stephen Yusko as a deacon. (NCR screenshot)

Like many cradle Catholic men of his generation, Yusko, 59, once thought of becoming a priest, so much so that he entered the now-defunct St, Joseph's Seminary, a minor Vincentian seminary in Plainsboro, New Jersey, (near Princeton) during his freshman year in high school before he transferred to Holy Trinity High School in the Long Island town of Hicksville, close to where he grew up.

Yusko eventually started a career in electronic-security systems sales and got married. But he continued to feel a calling to serve the church, so he entered the Diocese of Rockville Centre's four-year diaconate program in 2013.

He was ordained a deacon in June 2017, and was assigned to St. Joseph's, where he was a longtime parishioner. That was a year after Mangano arrived at the parish.

Yusko said that during his final year of studies for the diaconate, he heard "rumblings" of Mangano's spending at the parish, and said a conversation he had with Mangano in the fall of 2016 confirmed some of the stories he had been hearing about the priest.

The deacon said he started a blog after he was ordained and was called on the carpet by Deacon Larry Faulkenberry, director of deacon personnel for the Diocese of Rockville Centre, for an article that Yusko wrote for his blog about the possibility of women deacons, which he removed at the diocese's request.** Yusko wrote the article after he attended a seminar, where Phyllis Zagano, a Catholic author and advocate for women in the diaconate as well as an NCR columnist, spoke. He was also reprimanded for "being divisive" in complaining to the diocese about Mangano.

According to Yusko, Faulkenberry told him in 2017 to get in line or lose his ministry and was ordered not to preach at Mass.

Yusko proceeded to petition Bishop John Barres, the head of the diocese, to reinstate his permission to preach, and at that point, in September 2019, Yusko said that Mangano supporters filed a counter-petition against Yusko with the diocese. Those complaints, Yusko contends, prompted the diocese to suspend him from the diaconate and start the process of laicizing him. He has hired a canon lawyer to contest the laicization.

Dolan, the diocese's spokesman, said Yusko's case is not related to Mangano and said the diocese is "not free" to comment further on the laicization because the matter is now before the Vatican.