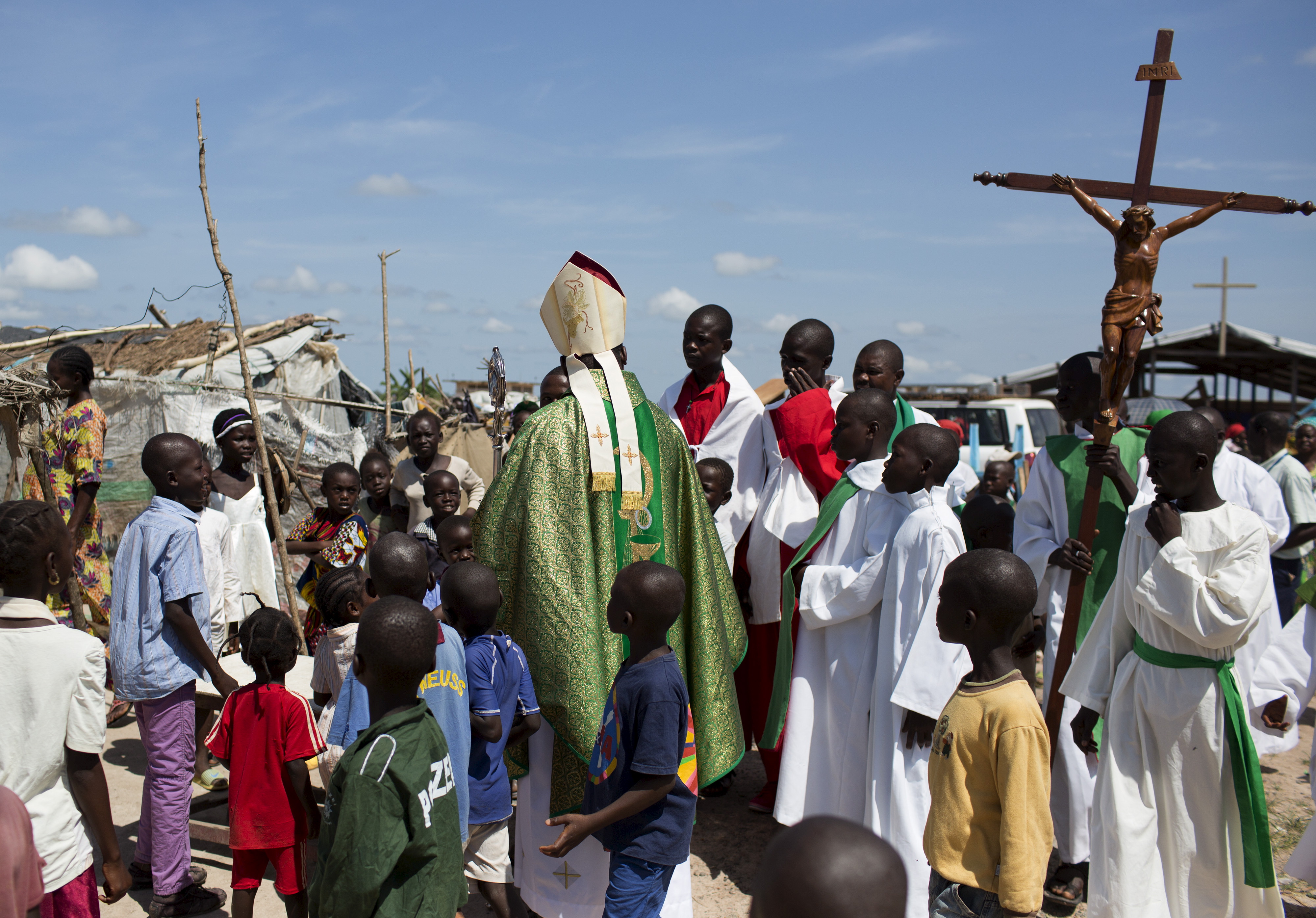 Cardinal Dieudonne Nzapalainga of Bangui, Central African Republic, greets youths after celebrating Mass for internally displaced people in Bangui in this 2015 file photo. Catholic bishops in the Central African Republic have distanced themselves from a group that is promising to defend the church and avenge the deaths of priests. (CNS/Reuters/Siegfried Modola)

Catholic bishops in the Central African Republic have distanced themselves from a group that is promising to defend the church and avenge the deaths of priests.

The group calling itself the League of Defense of the Church alleged there was inaction by Cardinal Dieudonne Nzapalainga of Bangui as the church faced attacks, with Christians and priests being killed.

But the bishops said the church did not recognize the organization and could not maintain any collaboration with such a group.

"We demand respect of the memory of priests, women and men killed in the exercise of their commitment to following Christ. They are worthy and faithful to our church and nation, which has always longed for peace," said Nzapalainga, president of the Central African Republic bishops' conference.

In a statement in mid-July, the cardinal said the Catholic Church's commitment to justice and unity, in collaboration with other religious denominations, exposed the church to all kinds of threats and attacks.

The League of Defense of the Church said the government and the cardinal had failed to act, despite the continuing abuses on the church.

According to the group, the church was regularly attacked and desecrated, although the government maintains the conflict in the Central African Republic is not religious.

"Priests and pastors are routinely murdered in full view of everyone," Francois Nzapakeye, the group's spokesman, said in a statement that listed priests and pastors killed recently in the country. He noted that no imam has been killed in Bangui since the start of the violence.

Fear was so present that Christians go to church under the protection of the military, said Nzapakeye, while Muslims went to mosque without hindrance.

"We will avenge the murders of many church leaders and men of God killed in the line of duty," he said.

In May, Catholic, Protestant and Muslim leaders in the country accused foreign power of orchestrating "a Machiavellian game plan by certain known, so-called friendly countries, with the connivance of certain compatriots."

"This is why we urge the general population, and particularly young people, wherever they find themselves, not to be dragged into hatred and violence, and appeal to all our nation's living forces, as well as political parties, for greater solidarity in overcoming this lasting crisis."