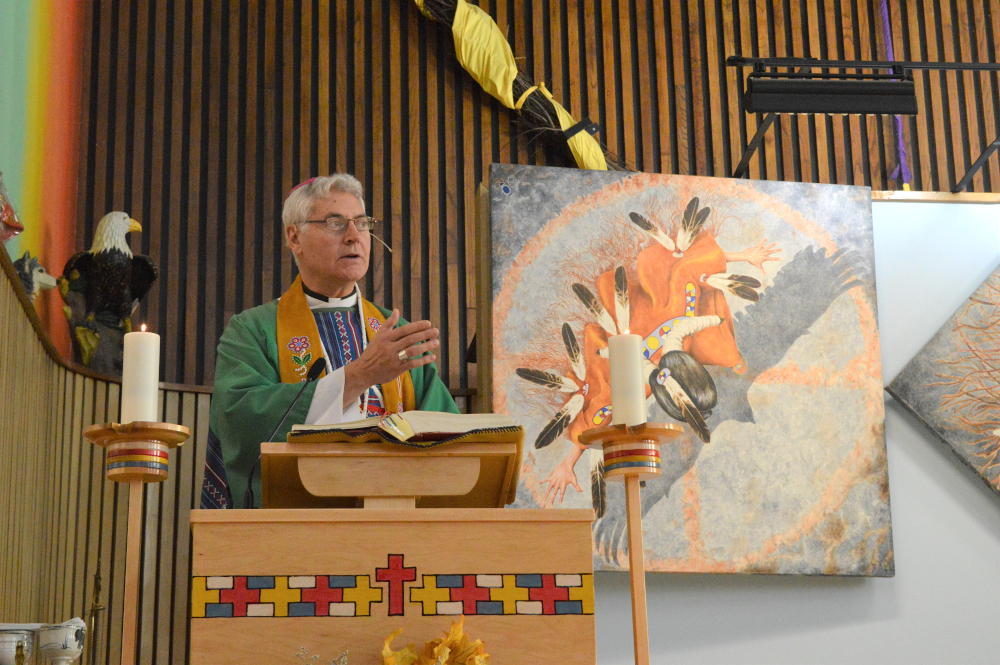 Archbishop Murray Chatlain of Keewatin-Le Pas in Manitoba, a member of the Our Lady of Guadalupe Circle, discusses the importance of rediscovering and protecting Indigenous languages Oct. 18, at Sacred Heart Church of the First Peoples in Edmonton, Alberta. (CNS/Grandin Media/Kyle Greenham)

Rosella Kinoshameg has vivid childhood memories of being silenced when she tried to speak her native Ojibway at St. Joseph's, a Catholic residential school near Sudbury, Ontario.

Kinoshameg is a member of Our Lady of Guadalupe Circle, a national coalition of indigenous people, Catholic clergy, women religious and lay people dedicated to healing the relationship between the Catholic Church and Canada's First Nations. Preserving indigenous languages also is a call to action identified by Canada's Truth and Reconciliation Commission.

"For the church today to become a way for people to access and relearn their language, it's a huge step in reconciliation," Kinoshameg said.

To that end, the circle released a letter and a video Oct. 28 acknowledging the injustices against Canada's indigenous people and the historic loss of their identity, language and cultural roots through the government's residential schools, some of which were operated by Catholic and other religious organizations.

Circle members meet twice a year in Ottawa, Ontario. However, for the release of the letter and video members chose Sacred Heart Church of the First Peoples in Edmonton as the venue.

The First Nations church is at the forefront of integrating indigenous languages and practices with Catholic tradition. Mass, prayers, readings and hymns are often in Cree or Dene. A smudging — a sacred indigenous practice of burning sweetgrass — is also offered before Mass.

"Sacred Heart Church represents a really good integration of Catholic and indigenous traditions, and it's something the community is very proud of and grateful to have," said Archbishop Murray Chatlain of Keewatin-Le Pas, a member of the Our Lady of Guadalupe working group and whose archdiocese encompasses parts of Saskatchewan, Manitoba and Ontario.

The release of the letter coincides with the United Nations International Year of Indigenous Languages. The U.N. said 40% of indigenous languages worldwide are under threat of disappearing.

In Canada, indigenous languages are on the decline. In 2011, 14% of indigenous Canadians reported that their first language was their native language, according to Statistics Canada. In the 1996 census, it was 26%.

Indigenous students were banned from speaking their native languages in many of the 44 residential schools operated by Catholics from the 1820s through the mid-1990s.

Chatlain hopes the circle shows Canadians that the church is looking to correct the wrongs of this period.

"In the residential schools, we were part of an effort to strengthen English and French and discourage their own languages," Chatlain said. "Today we are saying we recognize the importance of these languages and we're doing what we can to encourage their promotion and preservation."

However, that's not easy.

A common challenge in indigenous parishes is that many younger parishioners have little experience speaking in their native tongue, Kinoshameg explained. Often it is up to the elders of the parish to help incorporate their language into the Mass.

The circle is developing an online resource for translated prayers. Kinoshameg wrote Ojibway translations of the Our Father, Hail Mary and Glory Be prayers. They also are being translated into Squamish and Cree. 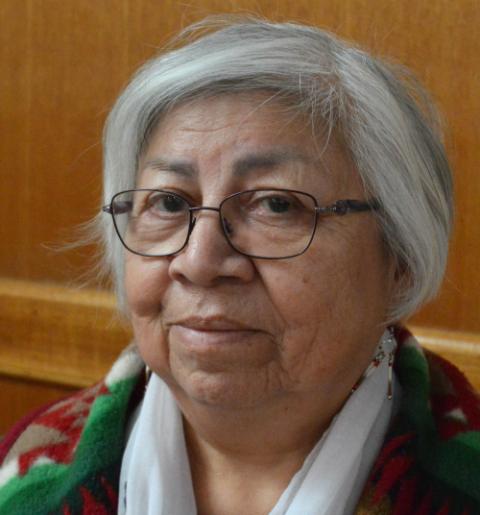 Rosella Kinoshameg is a member of Our Lady of Guadalupe Circle, a national coalition of indigenous people, Catholic clergy, women religious and lay people dedicated to healing the relationship between the church and Canada's First Nations. (CNS/Grandin Media/Kyle Greenham)

At her home parish of Holy Cross Church on Manitoulin Island in Ontario, Kinoshameg has taught the parish priest how to say the Sign of the Cross and the Lord's Prayer in Ojibway.

Now that the letter has been released, the circle hopes the value of indigenous languages — and the need to preserve them — will spread to parishes and First Nations across Canada.

"We hope this is an encouragement for indigenous people young and old to make efforts in preserving their languages, and that the church can be a place for learning it," Chatlain said.

In drafting the letter and creating the video, the circle sought insight from a variety of groups, including the Canadian Catholic Indigenous Council, Knights of Columbus, Catholic Women's League, and the Society of St. Vincent de Paul.

"Language is a basis to culture, it's a basis to identity," said Graydon Nicholas, the Knights of Columbus representative on the circle and a member of the Maliseet Nation in New Brunswick. "That was one of the great tragedies of the residential schools, the loss of language and identity. And it will take generations to recover that."

In addition, the circle is looking at ways to support efforts around missing and murdered indigenous women, and the Canadian Conference of Catholic Bishops is working on a pastoral letter that will address reconciliation.

"It will take some time, but this is meant to be a real effort at healing," Chatlain said.

Above all, the archbishop hopes the circle promotes not only indigenous culture but also the role of the Holy Spirit in healing the relationship between the church and First Nations.

"We must always keep God in our reconciliation work," he said. "To really have forgiveness, understanding and reconciliation, God has to be invited to be a part of it."