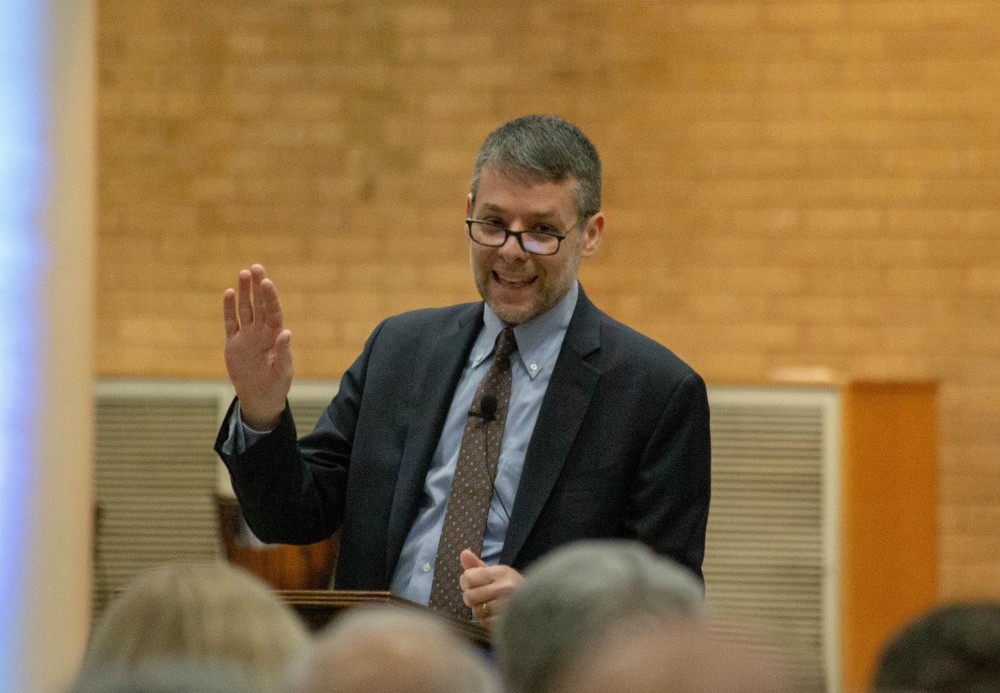 A month before the start of a global summit in Rome on the sex abuse crisis, a prominent church historian and theologian said last week that the issue poses the biggest challenge to the church in 500 years.

In an hour-long presentation, Faggioli set out to show how and why this particular moment in the history of the church has become so critical and what the crisis is telling Catholics about the state of the church. The talk was sponsored by the Bishop Keane Institute, a ministry offered by the parish, which brings prominent Catholic speakers to southeastern Virginia.

While the crisis has gone global, said Faggioli, one strain of it is peculiar to the United States, where it is inseparable from such hot-button issues as sexuality, homosexuality and gender. The scandal in the United States has resulted in a "theological crisis," he said. The crisis is also being used by some, according to Faggioli, to mount a campaign opposing Pope Francis.

Last year was a game-changer in the unfolding of the sex-abuse crisis, Faggioli said, a phenomenon that has become unrelenting.

"It's a past that doesn't want to pass; it keeps coming back," he said. "It's had an impact on me as a scholar and as a Catholic."

Almost as if recounting a bad dream, Faggioli walked his listeners through the events of 2018, beginning with Pope Francis' disastrous visit to Chile, his complicated visit to Ireland, the release of an Australian government study on the crisis and abuse-related reports that surfaced from India, Germany, France and Spain, noting that the year showed if nothing else that the crisis is no longer viewed as just an American problem, but a global issue.

It was, nevertheless, the firestorm that erupted in the U.S. church over the alleged abuse of seminarians and priests by former Cardinal Theodore McCarrick, followed by the extraordinary letter by Archbishop Carlo Maria Viganò, accusing Pope Francis of having known about and having covered for McCarrick, that pushed the crisis to a new level, Faggioli suggested.

When more than two dozen U.S. bishops later backed Viganò, the church moved to a place it had not seen for hundreds of years, he said: "You have to go back six centuries — the 1400s — to see a national church being split publicly about the legitimacy of a pope."

The shocking part of the Viganò controversy was not his letter, but the decision by the band of U.S. bishops to take his side, creating the "church equivalent of the Cuban missile crisis," Faggioli said.

In late August to mid-September, as the Viganò debate played out, Faggioli said he found himself "going to bed not knowing the next morning if we had one church or multiple churches."

Sandwiched in between the McCarrick disclosures and the Viganò uproar: the release of the Pennsylvania attorney general's sex-abuse report in mid-August, leading to a domino-like series of similar investigations in other states around the country, all of which promise that this moment in the church's history will continue to play out, Faggioli said.

The crisis has exposed fault lines in the U.S. Catholic Church, he suggested.

"It has become clear, more than before, that the abuse crisis is not simply a series of abuses that were covered up," Faggioli told the audience. "It has become part of an ecclesial fragmentation that really puts at risk one of the four things that every Catholic says when he or she says the creed," alluding to the "one" Catholic Church and the bishops who appeared to lay down a challenge to the pope.

Bottom line, there is one thing a Catholic bishop has to be about — communion with the bishop of Rome, he noted: "If that element fails, we have moved to a very dangerous situation."

The crisis, he continued, has revealed a series of fractures in what's called "global Catholicism."

"The sex-abuse crisis is being manipulated into a crisis to radically delegitimize a pope that certain quarters in American Catholicism, from the very beginning, never acknowledged as legitimate," Faggioli said.

Only months after his election in 2013, while Francis was still trying "to understand where was the kitchen in the Vatican," certain quarters in American Catholicism "had decided that this pope is not a real pope," he noted.

All of this serves as a backdrop to what transpired last year, a delicate moment in the U.S. church, Faggioli suggested.

Most facets of the sex-abuse crisis — denial, cover-up, corruption, clericalism — there's no question about any of that, Faggioli said, while adding that there is a second dimension.

"This version of the abuse crisis is really an American problem," because it is linked inextricably, inseparably, to the divisions in the church about sexuality, homosexuality and gender, he said.

In terms of what the crisis reveals about what needs to be done theologically, a "systematic, theological effort has barely started," Faggioli said.

In an aside, he mentioned that in mid-January, he began teaching a course to undergraduates at Villanova focused on the sex abuse crisis.

For his students, born in the late 1990s, the abuse-plagued church "is the only church they know," he said.

Among the theological issues the crisis raises are what to do with the Vatican, the papacy and the Roman Curia.

"The crisis is asking us: Do we want a centralized Catholicism as it used to be until yesterday or do we want to, do we think that we can, decentralize?" he asked.

For centuries, popes were all but invisible until Vatican I in the 19th century, followed by 20th century papacies that he likened to papacies "on steroids."

The most critical, distinguishing failure of leadership during the sex abuse crisis lies with bishops, though "there is a paradox here," Faggioli said.

One of the legacies of Vatican II was the empowerment of bishops, which essentially boiled down to something like this:

"This church cannot be an imperial church where the pope is like the emperor," he noted. "We need a cohort of bishops that can govern this church. … The abuse crisis is a huge wake-up call."

As a corollary of sorts to Vatican II's buttressing of the episcopate was its emphasis on the power of the laity, though that theology, he added, has "remained largely on paper."

Another theological issue cited: the priesthood and, particularly, the formation of priests.

Seminaries are largely the invention of the Council of Trent in the mid-1500s, with the only real changes since being largely decorative, he noted.

While the curriculum has been updated, attention to candidates' affective lives and development remains "totally secondary," Faggioli said, adding that the priesthood has become even more idealized than it was in the past and that isolation from the people, particularly women, is still the model.

"That is a huge problem," he said.

Closing out his talk, Faggioli said that the abuse crisis is "a very, very delicate moment — it's really hard."

As a scholar, he said he sees his role as not just tracking the latest news but thinking "theologically" about what the crisis tells him and "what it calls us to think about."

There is no exit, as it were, no escape from the responsibility: "Those who are in the church, they have to do something for those who can't, because it is too hard for them to be in the church. Being spared by the abuse crisis means that you have to give something back. That is how I see this moment."

During a question-and-answer period following his talk, Faggioli said he was somewhat optimistic about the upcoming summit in Rome on the sex abuse crisis, though he didn't think it would have much impact on the United States.

The so-called Dallas Charter enacted by the U.S. bishops in 2002 has made a difference, he said, so much so that it has emerged as a model.

"The global picture is of the church that, paradoxically, has to catch up to the United States," he noted earlier in his talk.

Asked afterward one-on-one about the prospect of a seemingly never-ending series of reports like the one issued by the Pennsylvania attorney general's office last summer, Faggioli said, citing Pope Francis, that there is a need for a "hermeneutic," an interpretation of the abuse crisis, a more holistic approach that transcends legal truth and who's guilty and who's innocent, as much as that's needed.

The issue encompasses not just the perpetrators and those who may have protected them, but individuals who while not technically guilty or technically innocent, were on to it, who knew that something was happening, but did not act.

"They're part of the picture," Faggioli said.

[Robert McCabe is a former reporter for the Virginian-Pilot.]