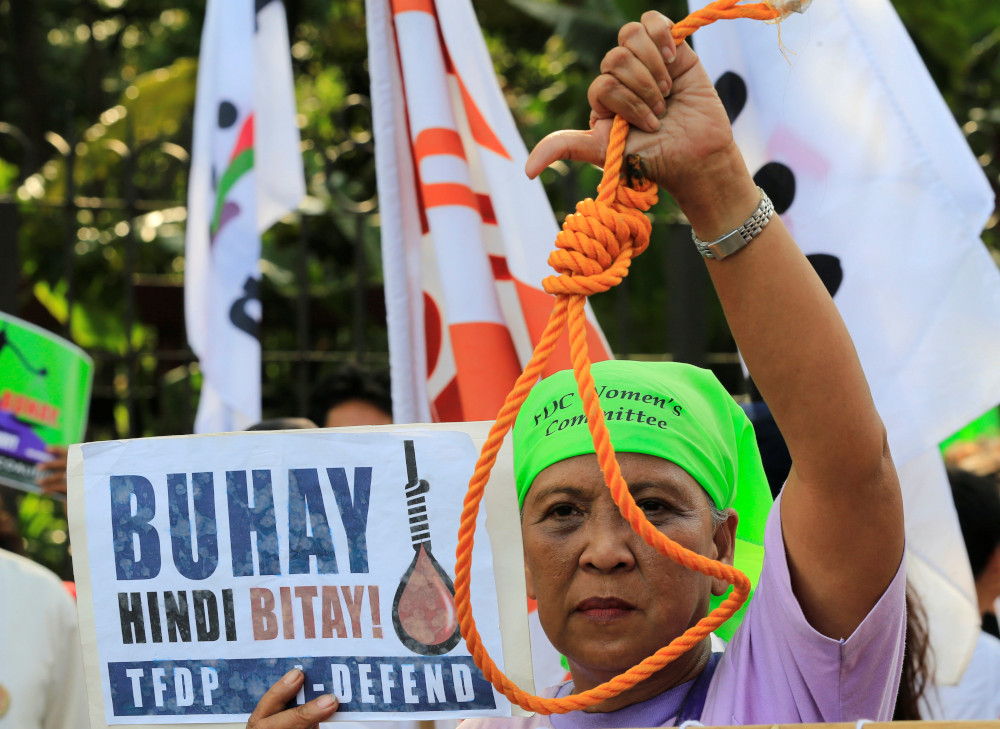 A woman holds up a noose during a Feb. 18, 2017, protest against plans to reimpose the death penalty during the Walk for Life in Manila. A senior Catholic Church official called on Philippine legislators to work for the benefit of the people and not blindly follow President Rodrigo Duterte in his drive to reinstate the death penalty. (CNS/Reuters/Romeo Ranoco)

A senior Catholic Church official called on Philippine legislators to work for the benefit of the people and not blindly follow what President Rodrigo Duterte wants, including his plan to reinstate the death penalty.

The call came after Duterte said during his State of the Nation address July 22 that he wanted capital punishment reinstated.

Duterte appealed to Congress to reinstate the death penalty for "heinous crimes related to illegal drugs and plunder."

Diamante urged the legislators to study whether the death penalty would solve the problem of illegal drugs.

"Don't give our people an illusion and a quick fix 'solution' to our problems," he said. "They deserve something better."

The church official called the death penalty "anti-life" and "anti-poor" and that instituting it would not reduce crime.

"(It) will only enhance the culture of violence and death that is now prevailing in our country," he said.

The president highlighted how illegal drugs kept by terrorists had led to the May 23, 2017 attack that led to a five-month siege in the southern city of Marawi.

"It pains me to say that we have not learned our lesson. The illegal drug problem persists," Duterte said.

Senators, however, were divided on the issue, especially after Duterte said he wanted to include plunder among crimes punishable by death.

"We'll try to convince some of our colleagues. It's a heavy debate. But we'll just have to work on it," said Senate President Vicente Sotto.

Philippine church leaders repeatedly have warned against any moves to pass a law that will revive capital punishment.

The death penalty was abolished under the country's 1986 constitution, but the nation's charter gave Congress the power to reinstate it for heinous crimes.