Civil marriage is for Caesar to decide, not the church 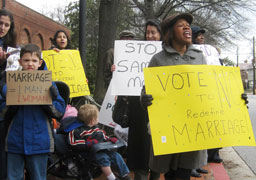 Supporters of traditional marriage demonstrate in Annapolis, Md., prior to a March 11 debate in the Maryland House of Delegates. A bill, which would have made it legal for couples of the same sex to marry, was returned to committee March 11, tabling the legislation in Maryland for the rest of this year's session. (CNS/Catholic Review/George P. Matysek Jr.)

If you count the sayings of Jesus in the New Testament, a phrase he uses with some regularity is “Be not afraid.” He says it to the apostles in all four Gospels, and he even tells it to Paul twice in Acts, once in a personal vision, and once in the voice of an angel.

Yet, today, his church finds itself afraid: afraid of movements by state legislatures to define civil law marriage in such a way as to allow same-sex partners to marry civilly. Why are we afraid?

Civil legislatures cannot define for the church what sacramental marriage is, what matrimony is. The First Amendment protects us from that. No legislature can tell the church who to marry or who not to marry.

The church would respond that, by taking this action, the state is devaluing the natural union of man and woman in matrimony. But we have long since abdicated that argument. What arguably could devalue the natural union of man and woman more than the fact that, in all 50 states, through no-fault divorces, any heterosexual spouse can walk away from the other, basically by filing an affidavit alleging that the marital bond is “irretrievably broken”?

I recall a late-night comedian saying, “Let gays get married. Why shouldn’t they be as miserable as the rest of us?” Easy divorce is more destructive of marriage than anything else. And we have long since acquiesced in that, even rectifying its results in our annulment courts.

There are two vulnerabilities with this argument, however. The first is scriptural. There is a patently clear warrant for polygamy in the record of the original covenant. By New Testament times, though, that practice was abandoned. But the patriarchs of the Jewish scriptures very clearly had multiple wives; so how “natural” is the one man, one woman definition of marriage? Natural law, to qualify as natural law, must be true in all times and all places.

The second flaw is bio-political. In an ideal world, human positive law would reflect natural law. But, in a democracy, that can happen only to the extent that civil society can perceive or interpret that natural law to the limit of its scientifically demonstrable knowledge. Natural law, despite the church’s assertions, is not self-evident. The church, in a civil society, is free to say that, in its perception, the natural law requires that marriage can only be between one man and one woman. But it must also be ready to address the counter-arguments of our fellow citizens who would say that, in their perception of nature, some folks come out of the factory with sexual attraction to members of their own sex. That is their nature. Did the divine Creator make a mistake? And if it is assumed or accepted that this is their nature, why should civil society stand in the way of their civil marriage?

An unfortunate aspect of the church’s opposition to same-sex marriage in the civil forum is that it carries aspects of intolerance. Yes, I realize that the opposite is true. The church could say that those pushing same-sex civil marriage on those of us who, because of our faith, are unalterably opposed to it are also intolerant of our religious beliefs. But in the scales of intolerance, the weight will always go against those who would prevent rather than those who would permit.

We need to give it up. This is not defeatism. This is simply following Jesus in the Gospels, who besides telling us not to act on our fears, also told us to render to Caesar what is Caesar’s and to God what is God’s. Civil marriage is Caesar’s. If Caesar wants to say that you can only get married on Tuesdays, wearing a blue suit and a red tie, that is Caesar’s call. The sacrament of matrimony is God’s. It is valid only when invoked between a baptized man and a baptized woman, in the presence of two witnesses and the spouses’ proper ordinary or pastor or his delegate. Caesar has no say in this.

The church does have a legitimate claim here, namely that we should not be legally required to act contrary to our beliefs by being forced to recognize civil same-sex marriages in any way: not by sanctifying them; not by opening our parish halls to their celebration; not by opening our adoption agencies to same-sex partners; not by affording employment benefits to same-sex spouses; nor by any other accommodation that would make us act contrary to our beliefs. Those are our civil rights, which civil society must recognize, much as we recognize civil society’s right to define civil marriage as it wills. These rights of the church are worth fighting for. But how civil society defines civil marriage simply is not ours to dictate, whether from force or fear.

[Nicholas P. Cafardi is a civil and canon lawyer, and a professor at Duquesne University School of Law in Pittsburgh.]

Civil marriage is for Caesar to decide, not the church