Coalition for the baptized has high hopes 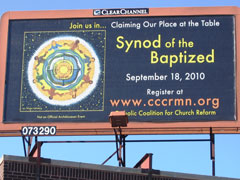 Five hundred people attended last year's Synod of the Baptized, which was publicized on this billboard. (Michael Bayly)

ST. PAUL, MINN. -- Some 2,000 people gathered in Detroit June 10 for the American Catholic Council to attend discussions surrounding current issues in the church. Among them was Paula Ruddy, who said the spirit of hope in the people was inspiring.

Ruddy isn’t a person who needs inspiration from other lay Catholics just for the nice feeling it gives her. She leads a lay organization in Minnesota. Like the American Catholic Council, it calls for more discussions in the church and more involvement from the laity in those discussions. Unlike the council, Ruddy’s group wants to become a permanent, official organization in its archdiocese one day.

So far, the St. Paul-Minneapolis archdiocese hasn’t bought into the reform group’s agenda -- last year the archdiocese warned people to stay away from the group’s study sessions and convention and this year the archbishop called them a threat to church unity -- but Ruddy remains hopeful.

Ruddy helped found the Catholic Coalition for Church Reform in the St. Paul-Minneapolis archdiocese because, she said, “there’s a lot of wonderful stuff going on in our archdiocese” but the laity of the archdiocese are not really pulled together as one core unit.

The coalition wants to strengthen the laity in the archdiocese and eventually create a council “for the baptized.” Reddy said that she does not know of any other group like it in any diocese in the United States.

“We want to make policies, practices, church administrative structures that will serve the Gospel message and we need to hear from the people in order to do that,” Ruddy said.

As one of its guiding themes, the group uses a description attributed to Pope Pius XI: “The church, the mystical body of Christ, has become a monstrosity. The head is very large, but the body is shrunken.”

The “shrunken” body of the church -- the laity -- has to develop its own organizational strength, Ruddy said. That’s where the Catholic Coalition for Church Reform comes into play.

“We found that people were really concerned about a lot of ... issues and also feeling that they had no place to talk,” said Eileen Rodel, co-chair of the Catholic Coalition for Church Reform. People can speak about those issues -- such as equality for women and sexual minorities -- at listening sessions the coalition hosts.

In putting together their vision, the organization’s founders had to come up with a very specific understanding of what they mean by church, said Bernie Rodel, the other coalition co-chair. They modeled their understanding of church after the Asian bishops’ model, he said.

“The church, in their understanding, is really a communion of communities that’s based upon acceptance,” Bernie Rodel said. The other qualities for church the Asian bishops outlined, he said, were equality, participation, dialogue and prophecy.

The coalition started in 2009 after a few Catholics noticed that there were many reform groups in Minnesota working on different things and wanted them to band together.

The coalition is a nonprofit Minnesota corporation and does not have a voting membership. It is run by a board of directors.

In April 2010, the coalition started work-study groups that explored any disconnect they saw between church practice and the Gospel message. The work-study groups looked at topics such as Catholic identity, Catholic spirituality and social justice.

The object of 2010 was to get action teams started to build networks and relationships with the community, and also to find out what people were “thinking and wanting,” Reddy said. Listening sessions provided an outlet for the latter.

The groups also planned the Synod of the Baptized, where an action plan and listening sessions could begin.

According to Ruddy, 500 registrants gathered at the Synod of the Baptized in September 2010. The coalition hopes to have 1,000 at this year’s synod, planned for Sept. 17, she said.

This year’s synod will launch the Council of the Baptized, which will be different from the coalition, Reddy said.

The council will be the “spokesperson” for the people and will be a “lay organization to discern and to communicate the sense of the faithful and to invite partnership with the official archdiocesan leadership in working for the mission of the church,” according to Ruddy.

Council members will be nominated by lay Catholics in the St. Paul-Minneapolis area who attend the synod or are supportive of the coalition. Nominees who agree to the responsibilities will then meet and each will nominate three people among themselves. From that pool of nominees, 16 people will eventually be chosen by the coalition board members, as well as five others who will be members-at-large.

The coalition invited Archbishop John C. Nienstedt to join its process, but he declined the invitation. In a June 8 letter to the group, Nienstedt noted that by canon law only a diocesan bishop can convoke a diocesan synod and that the coalition does not have his permission to hold a diocesan synod. He called the coalition’s organizing “an affront to the hierarchical ordering of the church ... and a threat to her unity.”

Nienstadt asked the group to cancel its plans “since nothing positive will be gained by such a meeting. Should you persist in your planning, I ask you to be honest enough to drop the word ‘Catholic’ from your organizational title.”

Ruddy said the invitation to Nienstedt still stands and the group wants to engage him in dialogue.

As for the future of the group, Ruddy said she thinks it’s going to be a constantly evolving idea. But the laity always will be the core.

“The sense of the faithful comes from listening to people,” Ruddy said.

[Zoe Ryan is an NCR intern.]

For coverage of the American Catholic Council, see:

Coalition for the baptized has high hopes