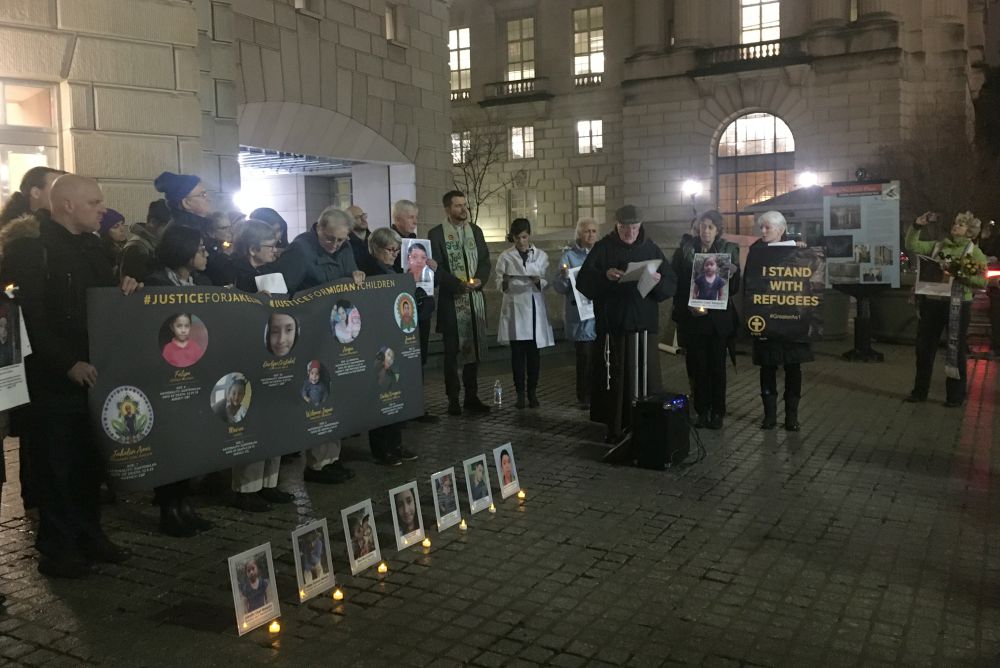 It's been one year since the first child died in the custody of U.S. Customs and Border Protection, yet the Trump administration continues to put the lives of immigrant children at risk by denying them access to proper care.

That is what an interfaith coalition, including Rep. Joaquin Castro, Democrat from Texas, said at a Dec. 9 candlelight vigil outside the national headquarters for U.S Customs and Border Protection (CBP).

"We know that the Trump administration is refusing to even give kids the flu vaccine — children and adults," said Castro, chair of the Congressional Hispanic Caucus whose twin brother Julián Castro is running for president.

The event came a day after the one-year anniversary of the death of Jakelin Amei Rosmery Caal Maquin, the 7-year-old Guatemalan girl who died of dehydration and shock after she was arrested by agents in New Mexico. Maquin did not receive emergency medical care for an hour and a half after showing symptoms, officials later said.

A total of six migrant children have died in federal custody.

After hearing about Maquin's death, Castro traveled to New Mexico with the Congressional Hispanic Caucus and visited immigration facilities. There, he said, the group found a government stunningly unprepared "to treat people who are facing even basic medical needs. They certainly weren't prepared to save a young girl's life."

To hold the Trump administration accountable, Castro introduced legislation last week that would require every death in government custody, including CBP, be reported to Congress, he said.

At a Dec. 10 press conference, the Congressional Hispanic Caucus also called on the Trump administration to provide the flu vaccine to migrant children and adults in its custody to prevent further deaths.

This announcement comes less than a week after ProPublica reported Dec. 5 that a video recording shows how the decision to send teenager Carlos Gregorio Hernandez-Vasquez to a small holding cell rather than a hospital after he was diagnosed with the flu led to his death. He was 16.

Dr. Alia Sunderji, a pediatric emergency physician speaking at the vigil, said the video of Hernandez-Vasquez has haunted her.

"We found that at least half of these children who died had the flu," Sunderji said. "Felipe [Gomez Alonzo] died on Christmas Eve in 2018. Shortly afterwards, Centers for Disease Control — the CDC — went and visited the detention centers. The next month, in January, they gave Customs and Border Patrol recommendations.

"They recommended to give the flu vaccine. Customs and Border Patrol did not," she said.

The CDC recommendation was revealed in a Nov. 7 letter from the agency to Congress, according to The Washington Post. Following Border Patrol's rejection, two more children diagnosed with the flu died in its custody.

The vigil, which mourned for all the children who died in Border Patrol custody, was co-sponsored by a number of Catholic organizations, including the Franciscan Action Network, Leadership Conference of Women Religious, and Network.

Franciscan Fr. Joseph Nangle, who ministers to the Latino community at Our Lady Queen of Peace in Arlington, Va., called on all his fellow Catholics in this country — particularly the bishops — and "all people of good will" to "join in this struggle for the soul of America."

Finally, in a message to Latinos and Mayans — the indigenous group to which many Guatemalan migrants belong — Nangle, speaking in Spanish, asked for forgiveness for the sins committed against them by the U.S. government.

"We love you and pray for you. We promise to struggle for justice and humane treatment on the part of our country. You have every right to be here," he said.

[Jesse Remedios is a Bertelsen editorial intern with the National Catholic Reporter. His email is jremedios@ncronline.org. Follow him on Twitter: @JCRemedios.]