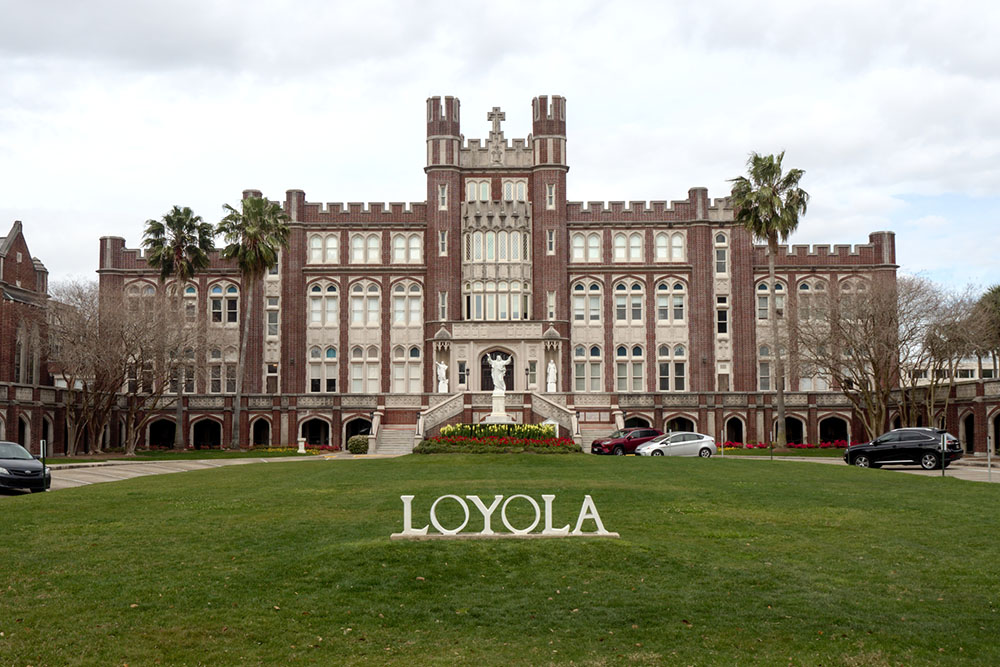 The main campus of Loyola University New Orleans. A committee of workers for the food service contract company Sodexo at the Jesuit school has been organizing quietly since the fall semester began. (Dreamstime/Mfmegevand)

Samantha Henry loves her job working in the dining hall at Loyola University New Orleans, where she's able to interact regularly with students.

"College is the first time many of them live away from home, and they're sometimes just looking for somebody to talk to them, listen to them," the 50-year-old told NCR during a recent work break.

But Henry, who is employed by the food service contract company Sodexo, said she's frustrated by her low wages after six years at Loyola. "The cost of everything is going up every day — groceries, household supplies — and for Sodexo not to want to give a raise is ridiculous," said the mother of three.

A committee of Sodexo workers at the Jesuit school has been organizing quietly since the fall semester began, and last week Henry joined dozens of coworkers as they publicly shared their desire to unionize. 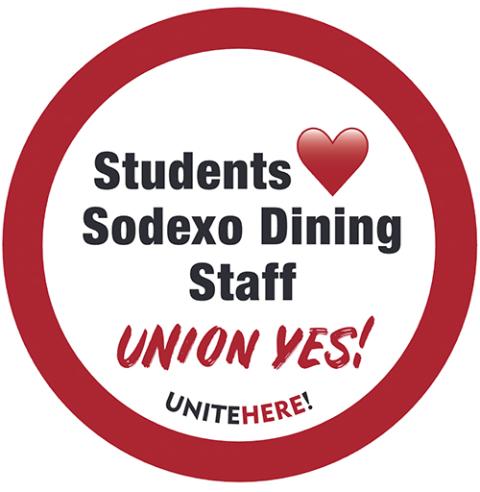 "I have a good work ethic and will continue to work hard, but I hope we can move forward and get the pay we deserve," Henry said.

The recent organizing effort at Loyola is part of a nationwide push by Sodexo workers — a number of them at Catholic colleges — to unionize or, where workers are already unionized, to fight for contracts with higher wages and lower health care costs.

The Catholic Labor Network, faith leaders and members of the Catholic university communities have stepped in to offer a range of support.

Clayton Sinyai, executive director of the network, told NCR that Sodexo previously has hindered workers' unionizing attempts, but that the Catholic Labor Network "will be standing with workers in solidarity every way we can."

"We will be joining them if there are informational pickets or rallies and writing our elected officials to vindicate the rights of Sodexo workers in government buildings," he said.

On Sept. 28, the network hosted a listening session featuring food service employees, and with allies from other religious traditions is collecting signatures for a letter to Sodexo, urging the company to remain neutral while employees consider union membership.

'I have a good work ethic and will continue to work hard, but I hope we can move forward and get the pay we deserve.'

Sodexo, a publicly traded multinational based in France, operates cafeterias in corporate offices, government buildings and dining halls. It also runs food service operations at 38 U.S. Catholic colleges and universities, where most of the food service workers are nonunion, according to Unite Here, a 300,000-member labor union representing food service and hotel workers.

With Aramark and Compass, Sodexo is one of the three largest institutional food service providers in the country.

"Over the past decade, there's been a revolution in the industry as cooks, cashiers, baristas and dishwashers have organized in labor unions," Sinyai told NCR. The other two firms have adopted "a high-road business model based on retaining a stable workforce and have developed a reasonably good relationship with their workers and with the union."

As a result, according to Sinyai, industrial food service workers, predominantly women and people of color, have transformed a previously low-wage industry into a career with a living wage, respect in the workplace and affordable health care.

Yet Sodexo "has resisted this trend with every means at its disposal," he said. "In Sodexo shops without the union, Sodexo pays the lowest wages and benefits the market will bear; in those that have a union, they resist paying living wages and offering affordable health care."

In response to these assertions and to the organizing activity at Loyola, Sodexo said in a statement that the company "respects the rights of our employees to unionize or not to unionize, proven by the hundreds of [collective bargaining agreements] we have in good standing with unions across the country, including with Unite Here."

"We are confident," the statement to NCR continued, "this one [at Loyola] will also reach an amicable agreement for workers, unions and our client very soon."

There has been a long and steep decline in union membership rates in the United States, but recent trends among food service workers, including the efforts by Sodexo employees, reflect broader momentum in the labor movement.

Over the past two years, meanwhile, workers at Starbucks, REI and Amazon have voted to unionize, and within the first half of 2022, unions won the most elections in nearly 20 years, according to figures compiled by Vox with data from Bloomberg Law. 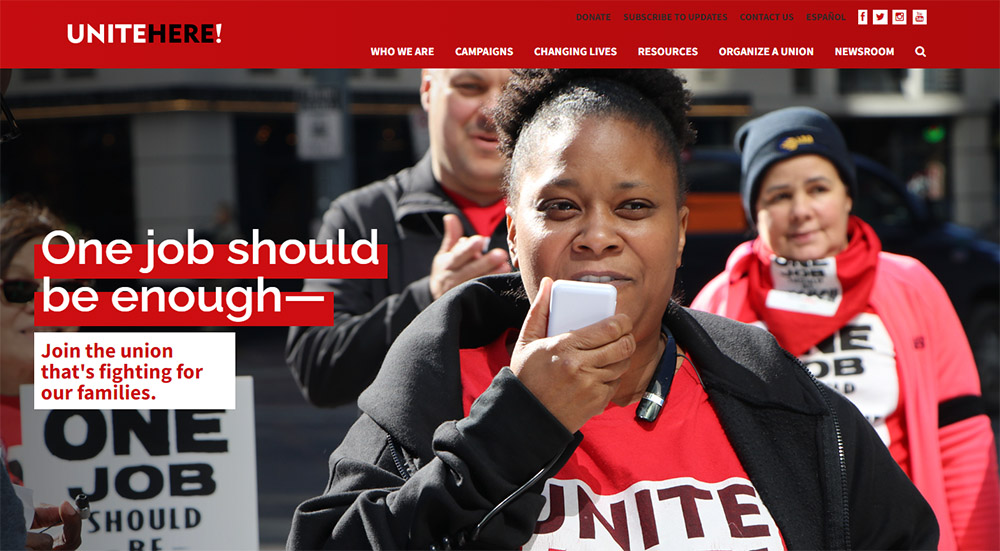 On behalf of workers at Loyola, Unite Here has asked Sodexo to enter into a card check neutrality agreement; if accepted, the company would pledge to recognize the union automatically if a certain number of signed union authorization cards are collected.

The letter to Sodexo prepared by the Catholic Labor Network and the Interreligious Network for Worker Solidarity affirms it is up to workers, not their employer, to make decisions around union membership. "We call on Sodexo to treat workers with the dignity they deserve," it reads.

Fr. Ty Hullinger, a pastor in Baltimore, signed the letter and attended the September listening session organized by the Catholic Labor Network.

"The exercise of this human right to form associations and unions has been under attack for far too long," Hullinger told NCR. "It is important for workers and their employers to know that our faith traditions are unanimous in supporting the human and civil right of workers to form unions to collectively bargain for wages and for all the conditions of employment."

The approximately 40 attendees at the listening session included priests and representatives from the Ignatian Solidarity Network, the Catholic Campaign for Human Development and Unite Here, as well as Sodexo and other food service employees.

Sinyai began the online event by explaining that Catholic social teaching on the rights of workers has been clear and consistent for more than a century.

'Because of a good union contract, I was able to go to the doctor, save money, have a son. When students, workers, priests, communities ... come together, you really change lives.'

In 1891, Pope Leo XIII issued the seminal encyclical on human labor, Rerum Novarum, which affirmed workers' rights to just wages, rest and fair treatment, and their right to form unions.

Leo XIII, said Sinyai, "hoped that in time employers and unions could work together to promote both the welfare of workers and the quality of goods and services they produced."

Chuck Hendricks is director of national contracts and internal support at Unite Here and a member of the Catholic Labor Network. He said the church's teaching on the rights of workers should be "something we are able to live and breathe" and prompt Catholics to "work for the people who work for us."

Josh Armistead, vice president of Unite Here Local 23 in Washington, D.C., recounted his fear and frustration after realizing his prized full-time job as a contracted dishwasher with Aramark at Georgetown University would barely support him.

"A person can go to work, get paid, pay all their bills and do everything right and have nothing," said Armistead.

In 2015, with the backing of the Georgetown community, Armistead and his co-workers secured unionization.

"Because of a good union contract, I was able to go to the doctor, save money, have a son," Armistead said. "When students, workers, priests, communities ... come together, you really change lives." 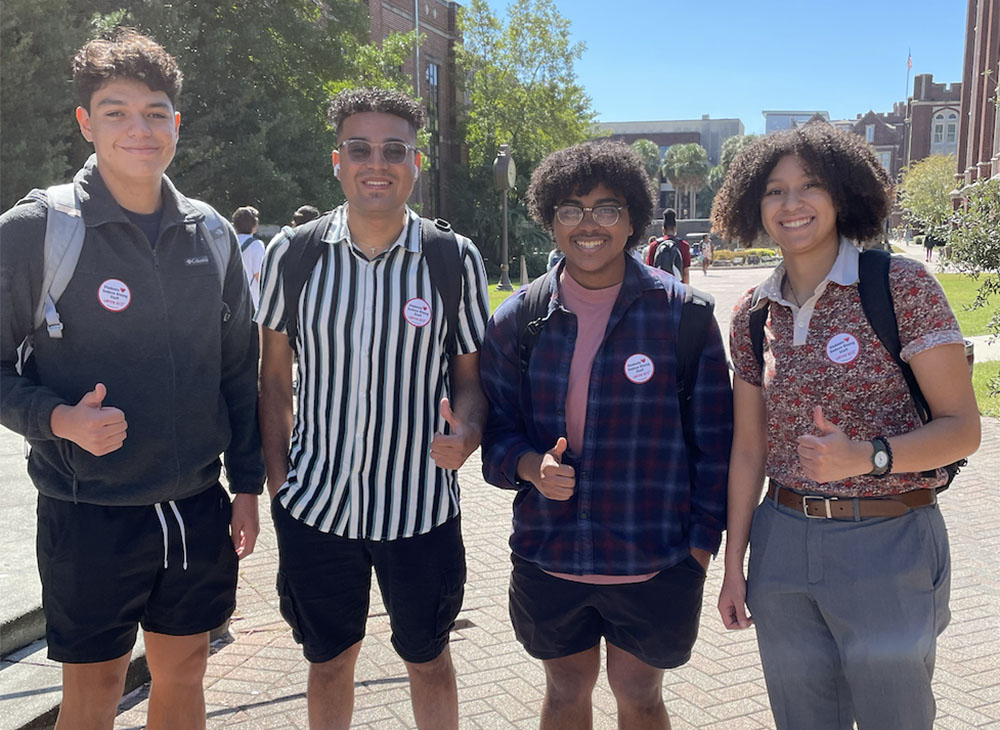 Sinyai told NCR he believes that when Catholic institutions contract out services, they should stipulate that service providers treat their employees in ways consistent with Catholic social teaching.

"Some do this, but too many instead look the other way and permit contractors to pay poverty wages and retaliate against workers who try to organize in unions," he said.

"We hope all Sodexo clients, and especially Catholic institutions that rely on Sodexo services, will make sure the company treats its workers justly, respecting their right to organize and paying workers a living wage."

NCR asked the Loyola administration for a response to Sodexo workers' organizing activity, but the public affairs office said there would be no comment on the matter.

However, a number of students, priests and faculty at Loyola have indicated support for the Sodexo employees, according to workers and Unite Here, which has negotiated wages for food services workers at Georgetown and five other Jesuit universities.

Akilah Toney, a third-year student at Loyola who is assisting Sodexo workers, grew up around community organizers and historians of the civil rights and labor rights movements.

"I don't believe you can pick and choose which social issues to highlight and work on; all social issues are connected — around gender, LGBTQ issues, racism, classism," Toney told NCR. "They are interconnected and intersectional, and I feel it was important for me to join in this effort."

A version of this story appeared in the Nov 11-24, 2022 print issue under the headline: Catholics support college cafeteria workers.