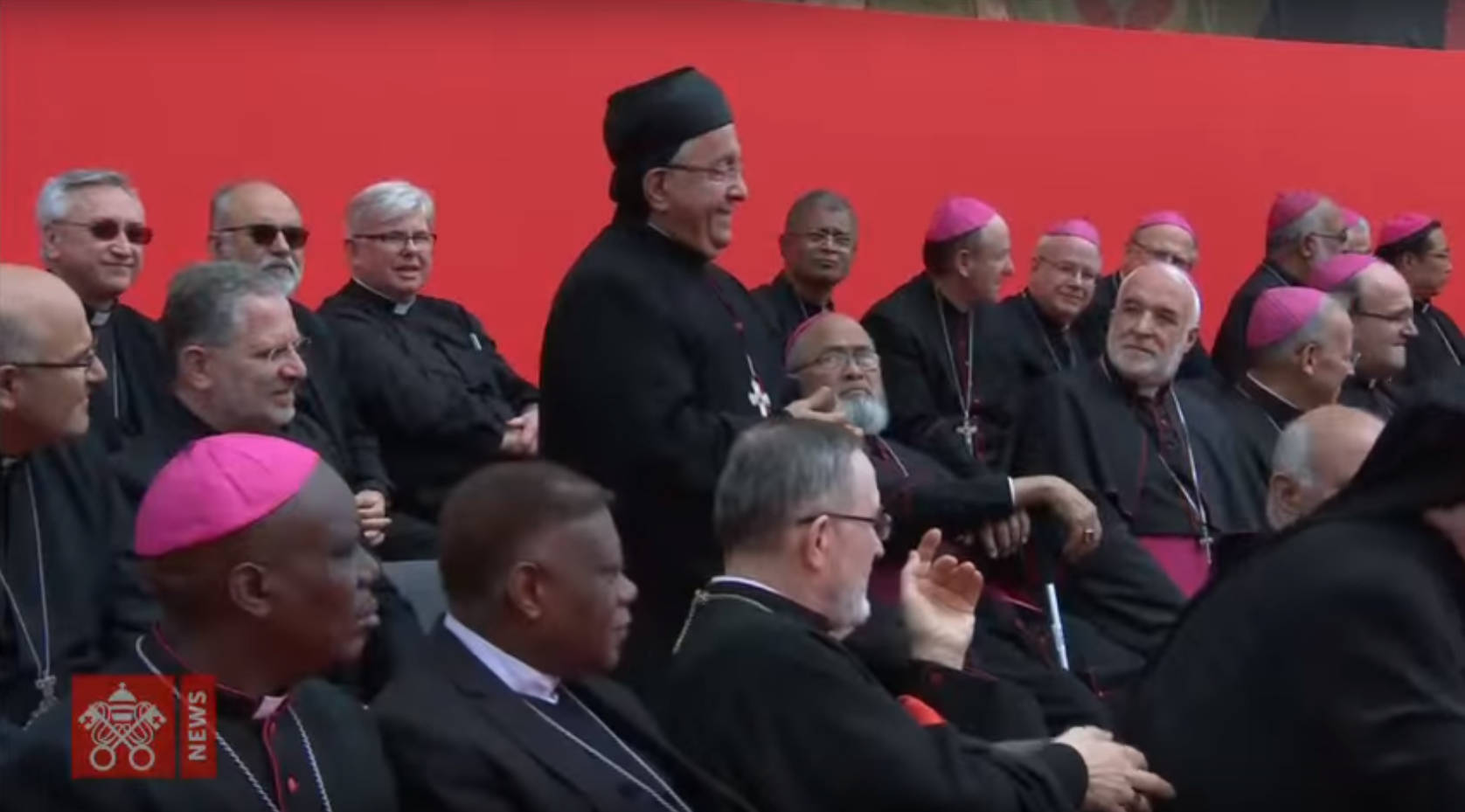 In this screen grab from the Vatican News Youtube channel, Archbishop Anthony Apuron, with a beard and cane, seated in the center of the image, is seen on stage with other prelates at the 50th anniversary of the Neocatechumenal Way event May 5 outside Rome.

Abuse survivor advocates are expressing alarm after a Catholic archbishop accused of molesting young men, who was recently convicted in a canonical trial, appeared on a stage with other prelates at an event in Rome with Pope Francis.

Guam Archbishop Anthony Apuron was seen at a May 5 event for the 50th anniversary of the Neocatechumenal Way, a popular adult formation movement. He was sitting alongside dozens of other prelates behind Francis as the pontiff took part in a meeting with some 100,000 members of the community in a field on the edge of Rome.

A Guam native who has led the U.S. territory's only diocese since 1986, Apuron was placed on leave by the pope in June 2016 after a series of accusations about abuse of young men in the 1960s and 70s were made public.

A Vatican tribunal announced in March that the archbishop had been found "guilty of certain of the accusations" against him, but, due to the secrecy of the canonical proceedings, it remains unclear if he was convicted of sexual abuse or of other charges.

Anne Barrett Doyle, co-director of abuse tracking website BishopAccountability.org, called it "disturbing" that Francis would appear on stage near Apuron.

"Does he not realize that Apuron has been accused by at least five people of child sexual abuse?" Doyle asked in a comment to NCR. "Is he callous or is he uninformed? Either explanation is unacceptable."

The penalty imposed against Apuron by the Vatican tribunal was removal from office and a prohibition from living on Guam. But the archbishop has said he will appeal the ruling, and during his appeal the imposition of the penalty is suspended.

The Vatican press office said May 8 that it did not have a comment about why the prelate was allowed to attend an event with Francis. The pope is not known to be made aware in advance of bishop attendees at his events.

Apuron can be seen clearly several times on the official Vatican video of the May 5 event, which is available on YouTube. During the 39th minute of the tape, the archbishop is seen seated to the right of Bishop Georges Chihane, the head of the Maronite Catholic Eparchy of Cairo, Egypt, as a master of ceremonies acknowledges Chihane's presence.

Apuron is a member of the Neocatechumenal Way. His connection with the group came under scrutiny during his archdiocesan administration, after accusations that he inappropriately deeded property to the community and gave it control of the archdiocesan seminary.

The Guam archdiocese is now being run by Archbishop Michael Byrnes, a former auxiliary bishop of Detroit. Francis appointed Byrnes as a coadjutor archbishop with special faculties in October 2016.

As a coadjutor, Byrnes would automatically become full archbishop should Apuron's removal from office be imposed.