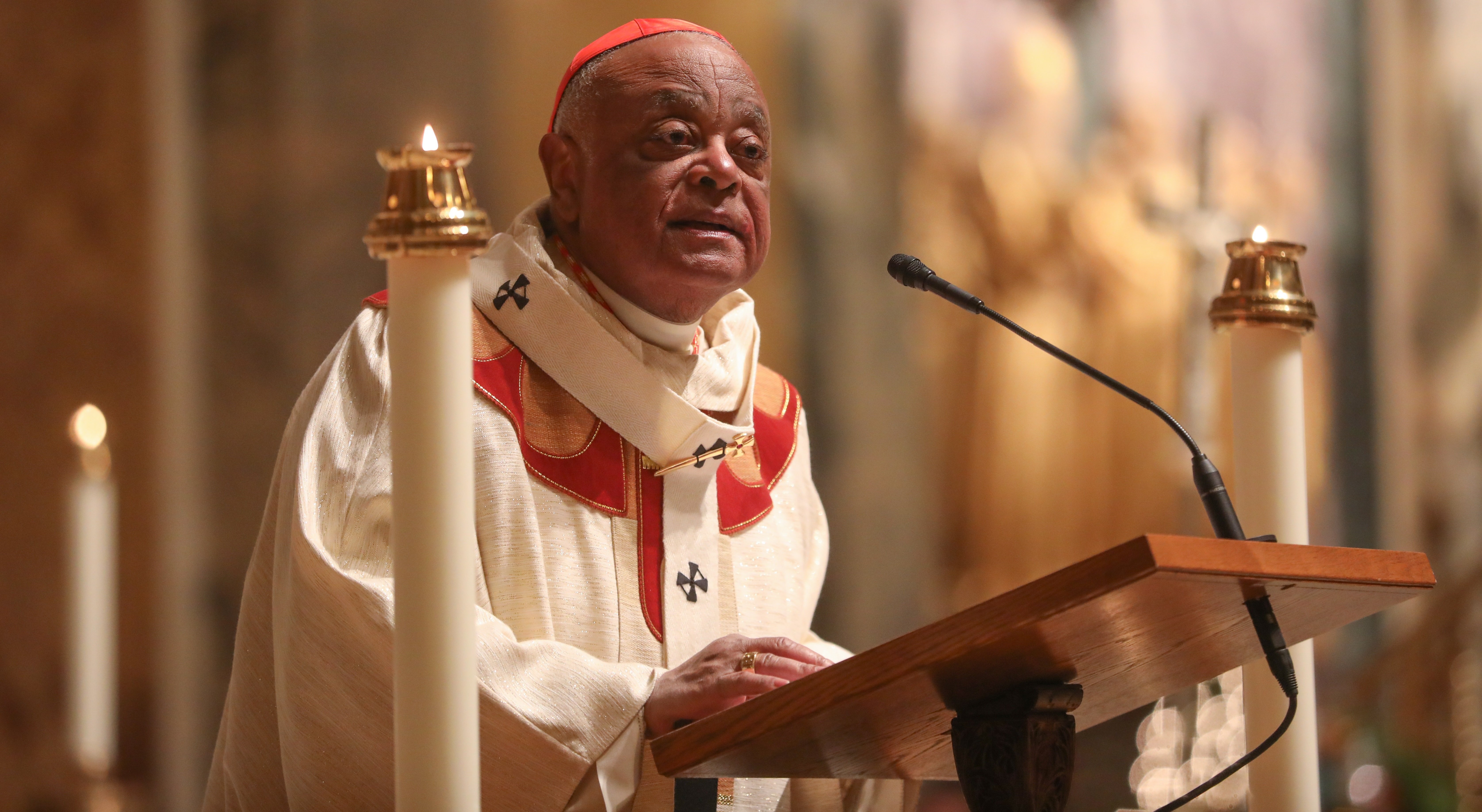 WALDORF, Md. — Resuming his public ministry following a period of quarantine after testing positive for COVID-19 Dec. 31, Washington Cardinal Wilton D. Gregory in an interview said he was doing well and happy to be back at work.

"I'm doing fine," he said following a Jan. 23 Mass he celebrated at Our Lady Help of Christians Church in the Washington suburb of Waldorf. He also dedicated the church's new altar, designed and built by parishioners.

On Jan. 21, he celebrated the Washington Archdiocese's annual Mass for Life at St. Matthew's Cathedral just before the national March for Life. The Mass was preceded by a youth rally.

Three weeks before that, the cardinal had issued a statement saying that as part of his regular pandemic routine, he had taken a rapid antigen test given by a lab technician and tested positive for COVID-19.

"I am fully vaccinated and boosted. I am experiencing no symptoms at this time and overall I feel quite well," he said in that Dec. 31 statement, adding, "Following my doctor's guidance, I will now quarantine at home."

So the cardinal had to cancel his participation in Masses at the beginning of the year at the cathedral, miss a Mass he had planned to celebrate for local Haitian Catholics and not attend a regional retreat with his brother bishops.

"I was very fortunate. I was completely asymptomatic. I had no cough, no fever, oxygen level was fine. I had no aches and pains," he told the Catholic Standard, Washington's archdiocesan newspaper, in the Jan. 23 interview in Waldorf.

He quarantined for 12 days and stayed at home. He was unable to go on retreat or go to Southern California for the 50th jubilee of a priest friend. After the 12 days, his doctor told him he was "good to go."

Cardinal Gregory reflected on his quarantine experience in his January column for the Catholic Standard and El Pregonero, the archdiocese's Spanish-language newspaper, and the papers' websites.

"As I pray and offer Mass each day in my chapel, my heart is filled with images of the folks of our archdiocese — our kids, seniors, clergy and religious," he wrote. "Those images have managed to make these days something of a retreat for me. I am also aware of the experience of being sidelined along with many others because of this virus.

"If nothing else, I have rediscovered how to run a washing machine and a dryer — a skill that most of our priests probably have had to learn as well!"

He told the Catholic Standard he was grateful for the people of the archdiocese praying for him after he tested positive for COVID-19.

"I got so many nice notes and emails and text messages. It was very touching to know that the folks in the archdiocese were asking the good Lord to restore me to full health and to help me get back to go to work," he said.

Being apart from his family of faith during the quarantine was difficult for him, Cardinal Gregory said.

"Of all the things that I experienced during the quarantine, I felt separated," he said, adding, "I was praying for people, I knew people were praying for me, but I couldn't get out and say hello to them and pray with them, and, you know, encounter them. That's a favorite word that Pope Francis likes to use, the word 'encounter,' and it means more than just being in the presence (of people).

"It means having a chance to interact with people, and it's more than just saying hello, it's listening to their stories, hearing how they're doing and how their kids are doing," he explained. "A lot of times people in these moments will share something of importance to them, (asking me to) pray for a special intention, pray for a parent that's sick or a child that's getting ready to go off to college.

He added, "Those things, those encounters are very important to me, because it means I'm being a priest, I'm identifying with the people entrusted to me, and I love that."

When Pope Francis named him to head the Washington Archdiocese in April 2019, he said that leaving his office and being with the people at parishes, Catholic schools and outreach programs was a vital part of his ministry.

The cardinal's upcoming schedule included celebrating several Masses at local Catholic schools for Catholic Schools Week Jan. 30-Feb. 5 and participating in a webinar about the death penalty and a Zoom dialogue with the Catholic community at Yale University about racism and other issues.