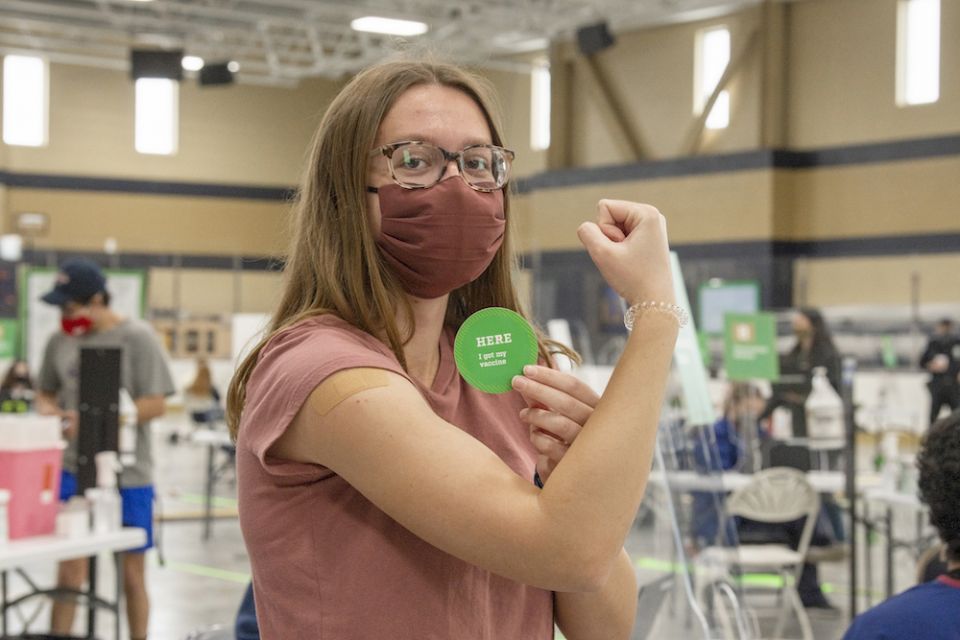 Editor's note: This story was updated at 2:15 p.m. CDT May 6, 2021, to include new information about the Catholic University of America's decision not to require vaccines.

Some two dozen Catholic colleges and universities have joined the growing list of institutions requiring COVID-19 vaccinations for students returning to campus this fall.

As among their secular counterparts, Catholic colleges requiring the inoculations are still a small minority, and the potential requirements have sparked debate about what Catholic colleges can and should require of their students.

According to a tracker maintained by the Chronicle of Higher Education, 21 Catholic colleges, of about 191 nationwide, had announced fall semester vaccine requirements as of May 4 — including large schools like DePaul University, Georgetown University, Loyola University Chicago, Fordham University and Boston College.

Each of the school's policies include religious and medical exemptions.

At Assumption University in Worcester, Massachusetts, Deborah Cady Melzer, dean of students, said that their commitments as a Catholic institution to the dignity of the person and to the common good pushed the administration to announce the decision in mid-April before many other colleges did.

"We just knew that this was an important step in order to maintain educational continuity on campus and make sure that we are being responsible neighbors," she told NCR.

Over the past eight months, students have chafed under twice-a-week surveillance testing, a campus with only half the usual number of students, canceled sports seasons and strict limits on gatherings, according to Cady Melzer.

She said that vaccinations — the university aims for 90% of the student population to be vaccinated by September — will allow the college of about 2,300 to lift many of its restrictions and return to some semblance of normalcy in the fall.

Assumption's requirement goes beyond all but two other Catholic universities' policies in requiring that faculty and staff also be vaccinated.

Faculty and staff want to be in-person with students, Cady Melzer said, and the requirement was the best way to make that happen safely.

The only other Catholic schools extending their requirements to faculty and staff are Trinity Washington University and the University of Portland.

The decision has not been so easy at some schools. 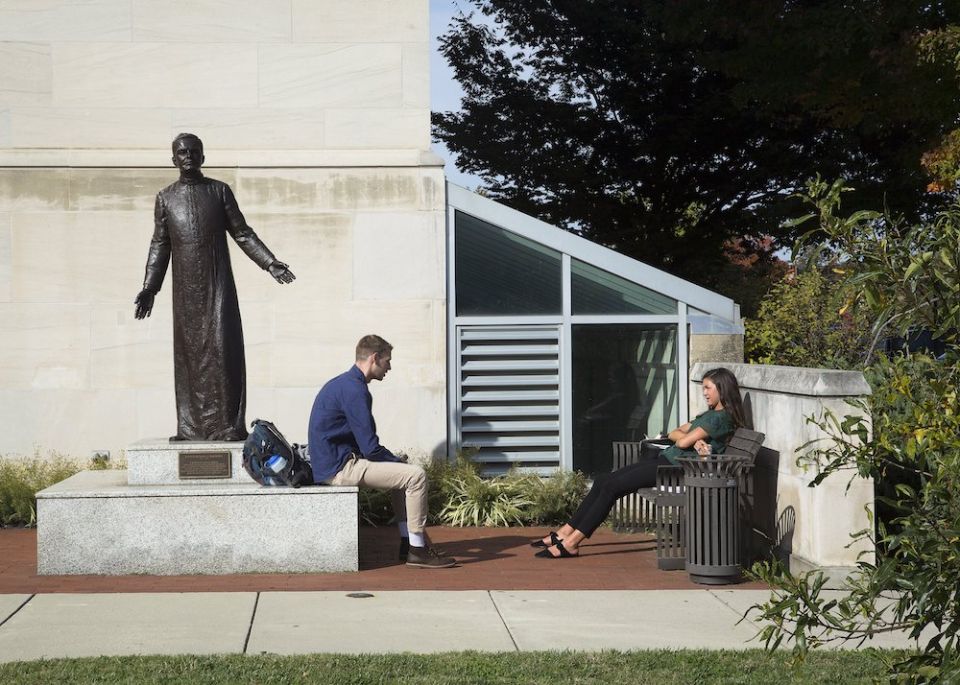 Students are seen on campus at The Catholic University of America in Washington, D.C., Oct. 20, 2020. (CNS/Tyler Orsburn)

At the Catholic University of America (CUA), president John Garvey stopped short of announcing a vaccination requirement, citing the results of an internal survey that showed 35% to 40% of the 2,500 respondents from the university community "would not insist that each member of the community get vaccinated."

"Unless events take an unexpected turn, we will respect that opinion," Garvey wrote in a May 5 email to the campus community.

The university will, however, collect coronavirus immunization information from "all members of the community" over the summer, the email said.

CUA faculty had pressed Garvey to adopt a vaccination requirement at an April 22 meeting of the faculty senate, according to minutes of the meeting reviewed by NCR and confirmed by two attendees.

Garvey said at the meeting that while such a measure is being reviewed and most of the comments he had received in-person were favorable, his office has also received emails opposing a requirement.

The president noted, according to the minutes, that CUA would be legally allowed to impose a requirement and would grant exemptions, but that "it seems that the decision in favor of or against is equally impactful on potential enrollment figures," the minutes read.

Faculty senators pointed out that the nation's only pontifical university already requires as many as 13 shots for matriculating freshmen, that Garvey had already emailed students encouraging them to receive the coronavirus vaccine and that staff "in particular" support a requirement, the minutes state.

An internal survey of the university community conducted by CUA's human resources department about a requirement garnered about 2,500 responses, of which two-thirds were in favor, according to a CUA employee familiar with the results who asked not to be named because they were not authorized to speak publicly.

In a statement to NCR, Lawrence Morris, chief of staff and head of the university's COVID-19 task force, said that the university is helping and encouraging people to take the vaccine.

"We have heard from a large number of students, faculty, staff, and parents representing a wide spectrum of opinions concerning the vaccine," he wrote. "Our primary concern is the health and safety of our community, and our decision will be based on what's in the best interest of our community."

Though the Vatican and many U.S. bishops have come out strongly in support of vaccination efforts, some Catholic groups oppose mandates.

"Given the moral and medical concerns about the vaccines, and the plain fact that many Catholic schools and colleges have had in-person instruction without major problems, why violate freedom of conscience?" Patrick Reilly, president of the right-wing Cardinal Newman Society, told the National Catholic Register last month.

Joseph Meaney, president of the National Catholic Bioethics Center, wrote that Catholics should oppose proposals that would discriminate "against persons who choose not to accept the COVID-19 vaccines" in an April opinion piece.

Therese Lysaught, a Catholic bioethicist at Loyola University Chicago, told NCR it was a "little puzzling" why some Catholic groups are raising moral concerns now after Catholic institutions have required immunizations for years.

Additionally, the church has taught at least since Pope Pius XII that "ordinary measures," medical procedures that are likely to prolong life without imposing a burden on an individual, like the coronavirus vaccines, are morally obligatory, Lysaught said.

"They're the only medical intervention where I protect my health and yours at the same time," she said. "Vaccines have a double level of obligation."

Catholic institutions not only have the same obligations under Catholic teaching that individuals do, they are supposed to exemplify that teaching; mandates are a good way to do it, said Lysaught.

Those opposing college vaccination mandates say that institutions need only encourage the vaccine.

Fox said vaccination efforts at Indiana colleges without vaccine requirements have seen between 55% and 75% of the student body take the shot. At Notre Dame, which announced its requirement on April 7 and held a series of mass vaccination clinics throughout the month, more than 90% of undergraduates already have at least one dose, Fox said.

"The requirement — it sort of draws a line in the sand and says we think this is important. We think it's the best path to return to normal, safe operations," he said.

The requirement makes the wider community in South Bend safer too, Fox said.

"There's always a concern about what's the spillover from the campus to the broader community." he said. "The benefit of the vaccine is it reduces the risk of any of those potential exposures for students interacting in the community."

A sign at the campus entrance to the University of Notre Dame in Indiana reminds students, staff and visitors of the mandatory mask policy on campus last fall. After a series of vaccination clinics in April, more than 90% of undergraduates already have received at least one dose of a coronavirus vaccine. (CNS/Matt Cashore, USA TODAY NETWORK via Reuters)

St. Edward's, which was one of the first universities in the country to roll out a requirement on March 29, added an exemption to the policy for those who refuse to provide proof of vaccination.

Justin Sloan, the university's vice president for institutional effectiveness and planning, told NCR that the policy already complied with the governor's order by including lenient exceptions and was modeled after the state-mandated bacterial meningitis vaccination requirement.

Sloan does not think the governor's public opposition to vaccine requirements will weaken the measure's effectiveness.

"I don't think many individuals seek their medical advice from elected officials," he said.

At Assumption, Cady Melzer said she hopes students might even draw a lesson from the requirement: "that this is an opportunity to think about our common good and how we play a role in helping to support the communities in which we live."

St. Edward's University in Austin, Texas, pictured in 2008, was one of the first universities in the country to roll out a COVID-19 vaccine requirement on March 29, 2021. (Wikimedia Commons/LoneStarMike)
A version of this story appeared in the May 14-27, 2021 print issue under the headline: Catholic colleges debate whether to require coronavirus vaccines . 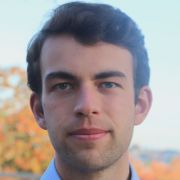