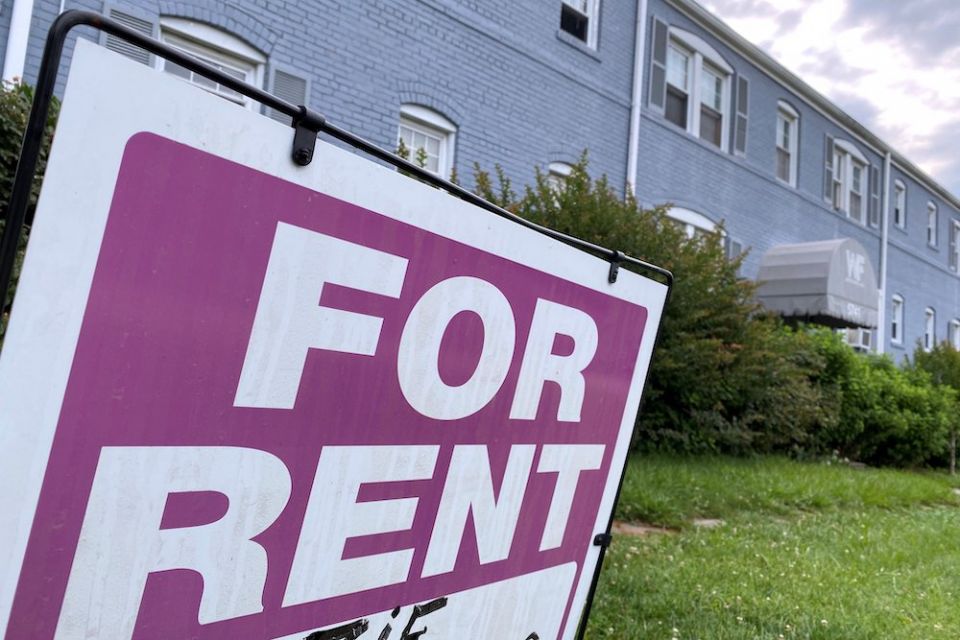 A "For Rent" sign is displayed in front of an apartment building June 20 in Arlington, Virginia. (CNS/Reuters/Will Dunham)

Catholic activists and members of Congress who had pressured the White House to extend an eviction moratorium celebrated Aug. 3 after the Centers for Disease Control and Prevention announced it had extended the eviction ban due to COVID-19.

Several members of the House of Representatives, many of whom had slept on the Capitol steps since the eviction moratorium expired July 31, cited their faith in explanation for their support of the ban.

U.S. Rep. Jimmy Gomez, D-Calif., a member of the Congressional Hispanic Caucus, mentioned his parents and his Catholic upbringing in the call for justice. 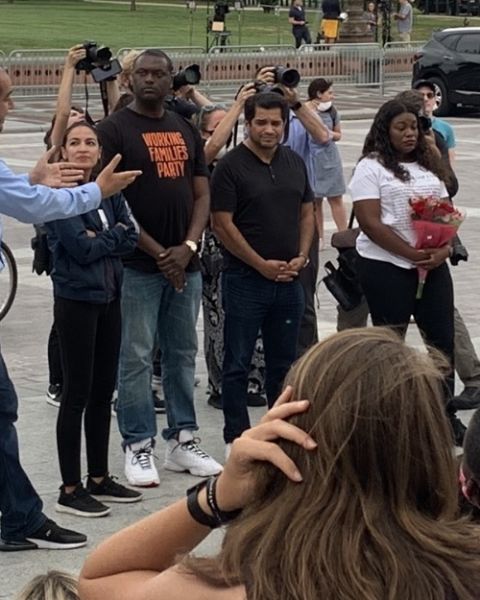 Congressional members stand in front of the Capitol Aug. 3 in Washington as news about the eviction moratorium is announced. From left to right: U.S. Reps. Alexandria Ocasio-Cortez and Mondaire Jones of New York, Rep. Jimmy Gomez of California, and Rep. Cori Bush of Missouri. (NCR photo/Melissa Cedillo)

"Growing up Catholic, but also my parents looking out for the community, just taught me that when somebody's suffering, when someone's hurting, you want to try and go and relieve that suffering and that hurt," Gomez told NCR.

"We were definitely afraid if we didn't extend the moratorium, a lot of people would be hurting economically, emotionally and it would take a lot more work to get those people back on their feet," Gomez said. "Caring for other people is how my parents raised me and how I was raised in the church."

Also showing up at the Capitol this past week to show their support were U.S. Reps. Alexandria Ocasio-Cortez of New York, Cori Bush of Missouri, Ilhan Omar of Minnesota, Jamaal Bowman of New York, Ayanna Pressley of Massachusetts and Mondaire Jones of New York. Sen. Elizabeth Warren also joined the group July 31.

"Delta variant is surging. I know not all of my colleagues get it, but take it from the formerly unhoused Congresswoman. We need to keep our people housed," Bush tweeted July 30.

In a July 30 letter to her colleagues, Bush wrote, "I have been unhoused and evicted. I've slept in my car and slept outdoors. I know what it's like, and I wouldn't wish that trauma on anyone."

Despite this victory, Bush noted there is still much to be done for those facing housing challenges.

Michael Vazquez, religion and faith director for the Human Rights Campaign, said in his own struggle with housing insecurity, he recalled sneaking into a Catholic chapel and sleeping behind an altar.

"I see it as our Catholic duty to be unyielding in our commitment to policy that is merciful," he told NCR. "The organizing on the Capitol led by Rep. Cori Bush is the embodiment of unrelenting commitment to advancing a policy agenda that prioritizes mercy and hospitality, justice and compassion."

"The extension of the moratorium gives us momentary reprieve to allow us to work towards ensuring that everyone who needs assistance can receive it without fearing that they or their loved ones would endure the brutality of housing policies that prioritize profits over people," Vazquez said.

This tension is a holy thing