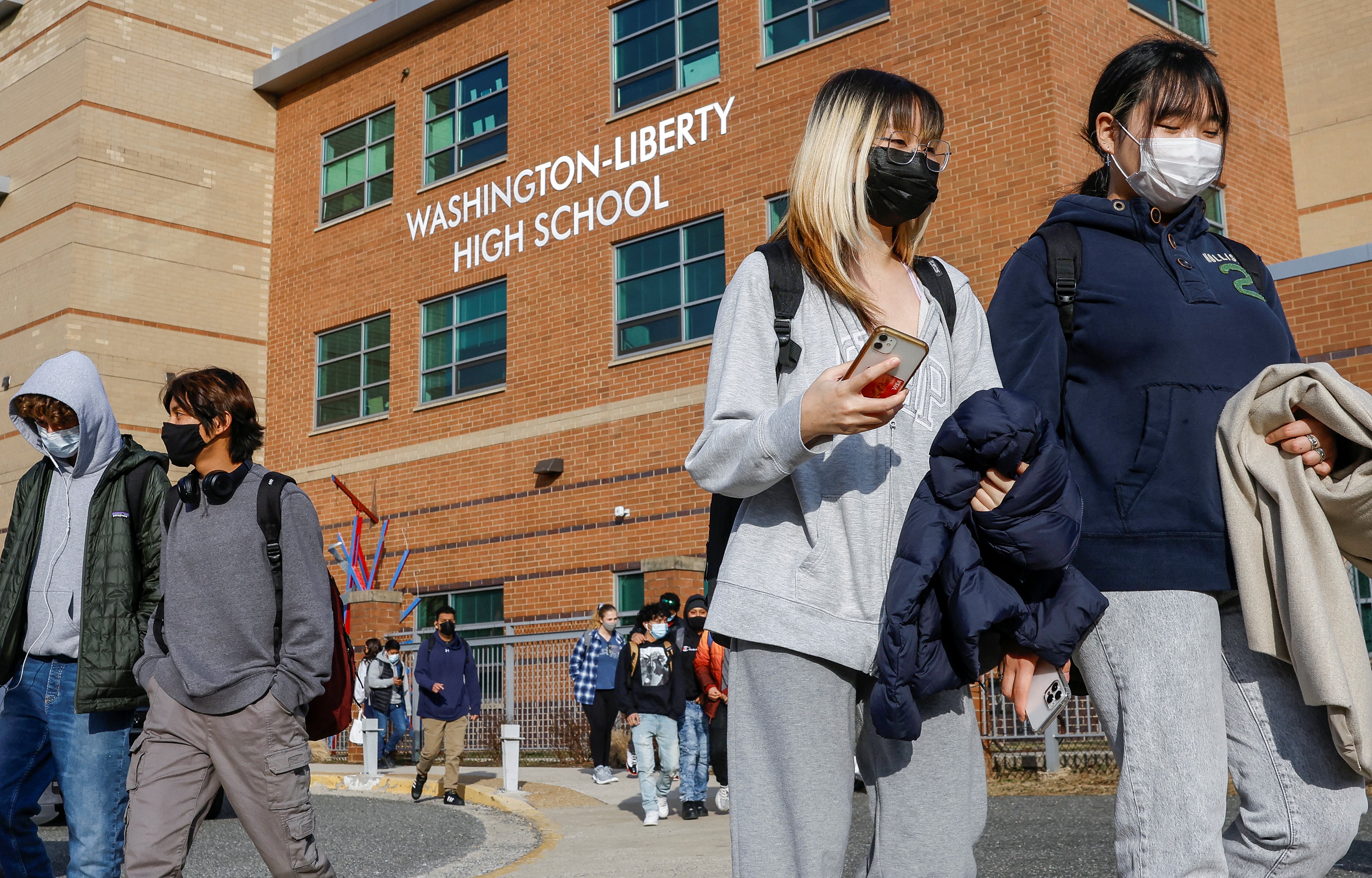 WASHINGTON — As regulations differ across the country about face mask requirements in schools, some Catholic diocesan school officials have stepped in to provide guidance for faculty, parents and students.

In Virginia, Republican Gov. Glenn Youngkin issued an executive order Jan. 15, the day he took office, saying parents could decide for themselves whether to follow the school mask mandate put in place by his predecessor. Youngkin's order took effect Jan. 24.

Seven school districts in the state sued the governor over this revised order, saying that school boards have "the right to enact policy at the local level, including policies that protect the health and well-being of all students and staff."

School leaders in Virginia's two Catholic dioceses — Richmond and Arlington — have said they will go along with the governor's order.

In a Jan. 21 letter to parents in the Diocese of Richmond, Kelly Lazzara, school superintendent, said all diocesan schools would comply with the order, which "gives parents the option to choose whether their children will be subject to a mask mandate in any school or educational program" in the state.

She also said the schools' office continues to "encourage that masks be worn by all employees, students and visitors in K-12 schools" following guidance by the Centers for Disease Control and Prevention and "given the recent surge in cases," referring to the omicron variant of the coronavirus.

She urged parents to talk with their children about their family's decision and to encourage them to respect others' decisions. She noted that "teachers will not be asked to enforce parents' pro- or anti-mask decisions in the classroom."

The letter pointed out that "choosing not to wear a mask may put students at higher risk for meeting the close contact definition" and could require them to quarantine and potentially face longer quarantine periods.

The Catholic schools' office in the Diocese of Arlington issued similar guidance Jan. 20 to pastors and school leaders about the updated mask policy.

It pointed out that "throughout the pandemic, our Catholic schools have been directed to follow state and local public health directives. Where those have been in conflict, the state requirement has primacy."

It said schools should continue to follow local public health guidance but without "violating the rights of parents" as described in the governor's executive order.

The schools' office also directed principals to issue updated guidance for school staff and parents on mask policies and encouraged diocesan schools to "continue using a range of mitigation strategies" including following CDC guidelines for isolation of those who contract COVID-19 and quarantining for those who come in close contact with a confirmed COVID-19 case.

New York also is grappling with a school mask mandate, and Catholic school officials in the Brooklyn Diocese and the New York Archdiocese said they hope the mandate will ultimately be lifted.

On Jan. 25, an appeals judge restored the state's mask mandate, a day after a judge in a lower court ruled that Gov. Kathy Hochul's administration did not have the authority to require people to wear face masks during the pandemic.

The judge granted the state's request to keep the mask rule in place while the governor's administration appeals the decision.

In a Jan. 25 letter to school parents, Michael Deegan, superintendent of schools for the New York Archdiocese, said: "It is the fervent hope of the Catholic schools in the archdiocese (that) the mask mandate will be eliminated, allowing our schools to make mask wearing optional."

But he also noted that for the time being, "until the court renders a final decision, Catholic schools will follow the state mask mandate."

He assured parents the Catholic schools' office would "continue to monitor this situation closely and keep you informed."

A similar statement was issued by Msgr. David Cassato, vicar general for Catholic schools in the Brooklyn Diocese.

Catholic schools in the Miami Archdiocese do not have to follow Florida's law banning school mask mandates. The archdiocese has recently had a mandate in place for students and staff but is considering lifting it.

A Jan. 22 letter sent to parents from school superintendent Jim Rigg said the archdiocese was tentatively planning to restore opt-outs for masks Jan. 28 for fully vaccinated students and families that have previously submitted consent forms allowing their children not to wear masks.

"I am hopeful that we are moving beyond the current COVID surge. Please continue to pray for an end to this pandemic and for all who have been directly impacted," he wrote.