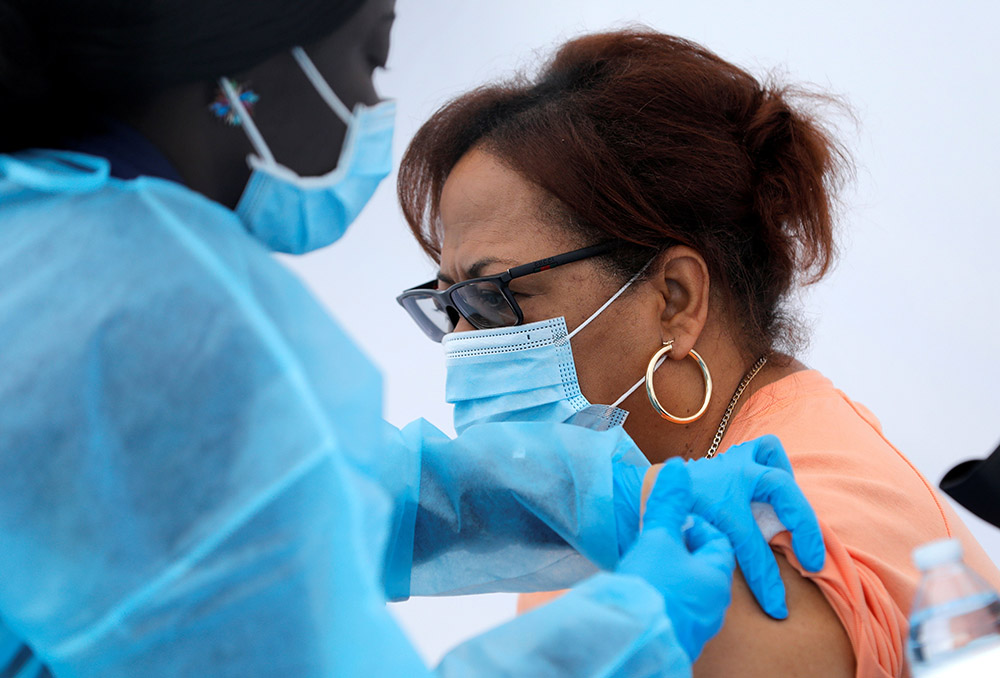 A local resident receives a dose of the Pfizer-BioNTech COVID-19 vaccine during a vaccination event for adolescents and adults outside the Bronx Writing Academy school in New York City June 4. (CNS/Reuters/Mike Segar)

Concerns regarding recently instituted or expected mandatory vaccination policies for COVID-19 by various governmental and institutional authorities, including Catholic health care systems and universities, have been voiced by the Catholic Medical Association, the National Catholic Bioethics Center and the bishops of Colorado.

These statements either critique the mandates themselves, casting them as a form of authoritative overreach, or call for wide allowance of religious/moral exemptions. There is, however, no sufficient moral reason for Catholics to request such an exemption. Furthermore, as Pope Francis has affirmed, there may be a moral obligation to be vaccinated for COVID-19 unless one has a medical contraindication.

Such an obligation is fundamentally grounded in the Gospel's call for each of us to love our neighbor as we love ourselves (Mark 12:31). Insofar as loving oneself entails a moral obligation to use proportionate means to safeguard one's own life and health, Christians are called to love others by taking proportionate means to safeguard their lives and health. As St. Thomas Aquinas exhorts in his commentary on St. Paul's Second Letter to the Thessalonians:

It is prescribed that a human being sustains his body, for otherwise he murders himself. … Therefore, one is bound to nourish his body, and we are bound likewise with respect to all other things without which the body cannot live.

Epidemiological data clearly shows that the best way to fulfill this moral duty is through vaccination and, further, that the currently available vaccines are proportionately safe and effective even if they have not yet (but will likely soon be) fully approved by the FDA. COVID-19 vaccination is thus an appropriate means of fulfilling our moral obligation to promote the common good, as stressed by recent requests by New York Cardinal Timothy Dolan and San Diego Bishop Robert McElroy that priests not sign conscientious exemption forms.

Invoking the concept of the "common good" immediately raises red flags for those, such as National Catholic Bioethics Center President Joseph Meaney, who emphatically assert each person's right and obligation to follow their own conscience in deciding whether to be vaccinated. There is an evident "culture war" ideology underlying Meaney's position and that of the Colorado bishops.

Fordham University theologian Charles Camosy provides more informative support for this view by citing the Second Vatican Council's declaration Dignitatis Humanae, which stipulates that conscience should not be coerced. However, Camosy neglects to note Dignitatis Humanae's further stipulation: "In the formation of their consciences, the Christian faithful ought carefully to attend to the sacred and certain doctrine of the Church."

One of the church's highest doctrinal authorities, the Congregation for the Doctrine of the Faith, has affirmed unequivocally that one may receive any of the currently available COVID-19 vaccines in good conscience.

There is a concerning subjectivism inherent in such absolutist calls for conscience exemptions in the current circumstances. The present assertion of personal political rights is not all that different from the "expressive individualism" that Carter Snead rightly critiques as being at the heart of American public bioethics, underlying advocacy for abortion and physician-assisted suicide among other morally contested practices.

While every person should follow their conscience, even if their conscience is in error, this personal moral obligation does not excuse every act if one's conscience is misinformed by voluntary ignorance. Nor does it warrant respect in all cases by public authorities who, engaging in prudential reasoning, are charged with devising laws and policies that promote the common good — whether restricting access to abortion to protect the unborn, disallowing assisted suicide to safeguard vulnerable terminally ill patients, or mandating vaccination to promote the physiological, social and economic health of civil society.

The Catechism of the Catholic Church defines the "common good" as "the sum total of social conditions which allow people, either as groups or as individuals, to reach their fulfillment more fully and more easily." Though among those conditions are included freedom of conscience and religion, the catechism also emphasizes "the social well-being and development of the group itself" and stipulates that "it is the proper function of authority to arbitrate, in the name of the common good, between various particular interests."

The catechism concludes: "It is the role of the state to defend and promote the common good of civil society."

Not only is the proper role of the state to promote the common good, but Aquinas further contends, "Legislators make men virtuous by habituating them to virtuous works by means of statutes, rewards and punishment."

Far from being intrusive government overreach into an inviolable sacrosanct realm, it is precisely the proper function of governmental and institutional authorities to adjudicate competing claims among individuals in light of what will promote "the progress of persons" and thereby cultivate a virtuous citizenry. Pope Benedict XVI further affirms in Caritas in Veritate that promoting the common good requires concrete action on behalf of others:

To love someone is to desire that person's good and to take effective steps to secure it. Besides the good of the individual, there is a good that is linked to living in society: the common good. It is the good of "all of us", made up of individuals, families and intermediate groups who together constitute society [Gaudium et Spes]. It is a good that is sought not for its own sake, but for the people who belong to the social community and who can only really and effectively pursue their good within it. 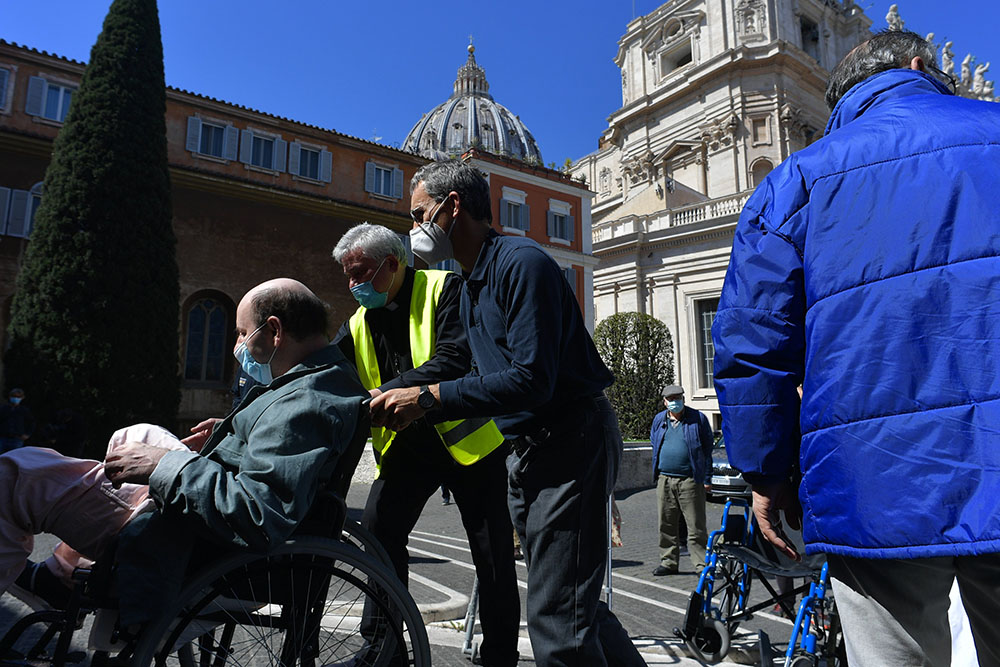 Cardinal Konrad Krajewski, the papal almoner, wears a yellow vest as he assists with a COVID-19 vaccination clinic for the poor at the Vatican March 31. (CNS/Vatican Media)

The expressive individualism implied by Meaney's absolutist position — a right-wing mirror version of the "my body, my choice" rhetoric of abortion rights advocates — runs counter to the conversion to which the eucharistic liturgy calls us. As Benedictine Fr. Virgil Michel aptly puts it:

The development of a true culture, i.e., the realizing of the best possibilities in human nature, is essentially a social phenomenon, as we have seen. Now the liturgy presents us with the divinely established model of social intercourse between men [sic] under the guidance of Christ. While it safeguards all the values of human personality, it uses the energies of God Himself for sloughing off all the excrescences of individualism, thus elevating all that is good in man above the narrowness of individual selfishness, of snobbery, or of extreme love-blind nationalism, into the catholic sympathy of Christ for all men, for all things human, for all that is good in God's world.

Catholicism is not a religion that promotes the glorification of the individual in asserting their political rights over others. Rather, a distinctly Catholic stance holds that respect for the intrinsic dignity of each human person is inextricably bound up with the social ethic expressed in the sacrament of Communion and articulated by the magisterium.

Benedict XVI further notes in Caritas in Veritate that the teaching of Humanae Vitae, by emphasizing both the unitive and procreative meaning of sexuality, "is not a question of purely individual morality" but rather evinces "the strong links between life ethics and social ethics." Benedict concludes:

The Church forcefully maintains this link between life ethics and social ethics, fully aware that "a society lacks solid foundations when, on the one hand, it asserts values such as the dignity of the person, justice and peace, but then, on the other hand, radically acts to the contrary by allowing or tolerating a variety of ways in which human life is devalued and violated, especially where it is weak or marginalized" [Pope John Paul II, Evangelium Vitae].

A society that, through its governing authorities, fails to employ proportionate measures to curtail the spread of a deadly virus and its mutation into even more virulent and deadly forms effectively devalues and violates human life. Duly-appointed civil authorities have not only the right by virtue of their office, but the duty to promote the common good by whatever measures that prudential reasoning informs their consciences are required, so long as such measures are proportionate to the end at which they are aimed.

In the present case, given the clear evidence of mutations and rising infections due to the prevalence of unvaccinated persons, as well as the safety and efficacy of the available vaccines, vaccination mandates fall under the legitimate authority of civil and institutional leaders fulfilling their moral obligation to promote the common good — and we, as individual citizens, fulfill ours by adhering to such mandates without invoking dubious claims of "conscientious exemption."

A version of this story appeared in the Sept 3-16, 2021 print issue under the headline: Catholics have no grounds to claim exemption.