by Alexander Thompson
Coronavirus
People
This article appears in the Coronavirus: One year later feature series. View the full series. 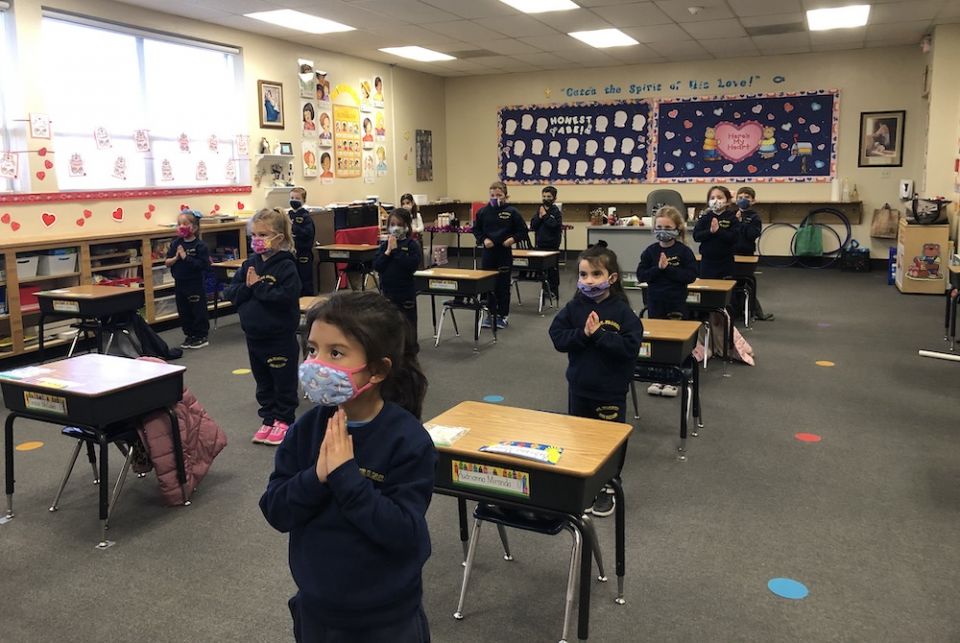 Distanced and masked students pray in their classroom at St. Francis de Sales School in Las Vegas. (Courtesy of the Las Vegas Diocese)

In an unprecedented drop, U.S. Catholic school enrollment decreased by 6.4%, or more than 111,000 students, between fall of 2019 and the beginning of this school year.

The plunge, based on diocesan data published by the National Catholic Education Association (NCEA) in February, is the largest decline since record keeping began in the early 1970s and exceeded the drops that followed 2008 financial crisis and the clergy sex abuse scandal.

The enrollment drop translated to an equally stark number of Catholic school closures; 186 elementary schools and 23 high schools shut their doors permanently in 2020, more than doubling the average number of annual closures in the last five years, the NCEA found.

Mary Pat Donoghue, the executive director of the education secretariat at the U.S. Conference of Catholic Bishops, called the drop alarming but not unexpected, given the pandemic and long-term trends.

"The COVID crisis acted as an accelerant," she told NCR. "We were already in a process of decline for some time already."

Indeed, in the five years preceding the pandemic, the number of students in Catholic education had slipped steadily by about 2.5% per year from 1.92 million in 2015 to 1.62 million in 2020, according to the NCEA.

The pandemic added new pressures to long-existing ones like declining birthrates and increasing disaffiliation with the church, Donoghue said.

The nation's largest Catholic school district in the Los Angeles Archdiocese had the largest decrease in enrollment, with more than 9,000 fewer students, representing 12.3% of last year's enrollment.

The district's superintendent Paul Escala told NCR the drop is "profoundly significant," and although he is proud no schools have closed this year, consolidations may be on the horizon next year if students do not come back.

The severity of the pandemic and the accompanying restrictions varied from state to state and county to county, making generalizations difficult.

In Los Angeles, for example, California's pandemic health orders prevented archdiocesan schools in L.A. County from reopening in-person in September, while many other dioceses could attract families from virtual or hybrid public schools.

In October, 68 of 188 L.A. County Catholic schools returned to in-person learning for preschool through second grade after obtaining waivers, but as Los Angeles became one of the country's worst viral hotspots, they had to close again.

Many parents, especially among the schools' Latino families, lost their jobs or fell ill with the virus and could not pay tuition.

Faced with tough financial choices, struggling parents in Los Angeles and in nearly every diocese in the country found the easiest choice was to pull their students from preschool and, in some states like California where it is not compulsory, kindergarten.

About 40% of the 2020 slump was attributable to a 26.6% decrease in preschoolers enrolled in Catholic schools, according to the NCEA figures. Excluding preschool, national enrollment only went down by 4.2%.

In some dioceses, the preschool plunge was so significant it erased enrollment gains in upper grades.

That is exactly what happened in the Archdiocese of St. Paul and Minneapolis, Minnesota.

According to the Minneapolis-based Catholic Schools Center of Excellence (CSCOE), which helps the archdiocese's schools attract students, K-12 enrollment was up 4.4%, fueled by new K-2 students whose parents were weary of virtual instruction. However, a 10.5% decline in preschoolers cancelled that out.

Brian Ragatz, who leads the CSCOE, said that because preschool admission is rolling throughout the year, many parents and grandparents kept young children home, saving on tuition for a few months and waiting to see if there was widespread coronavirus transmission in schools.

"They just weren't ready to re-enroll them when a lot of this data was collected," he told NCR.

The preschool effect was widespread. Catholic schools in Massachusetts for example, gleefully announced surges in K-12 enrollment in September, but NCEA data show schools there lost 4% of their students overall.

Students do work on tablets at St. Elizabeth Ann Seton School in Las Vegas. Despite an unprecedented drop in enrollment nationwide, Catholic schools in Las Vegas grew by 5.5% last year. (Courtesy of the Las Vegas Diocese)

Ragatz said that as the school year wore on, more and more families gained confidence in safety, and he estimated around half of the preschoolers lost have returned in Minneapolis-St. Paul Catholic schools. A record number of kindergarteners have been registered for next year, suggesting the drop might be temporary, he added.

Though nearly every diocese saw a precipitous decline in preschool enrollment, it still is not enough to explain all of the decline or why some places saw surges in K-12 students while others saw steep declines.

In the Diocese of Brooklyn, New York, which lost 9.3% of students overall, the divergent pandemic experiences of two elementary schools separated by just over 2 miles illustrate the role played by geography and demographics.

She figures at least 60% of her school's children's parents work in the restaurants, nail salons and service jobs devastated by the virus and the lockdowns that followed. Many were thrown out of work while some of the Asian families packed up and left after facing pandemic related discrimination. 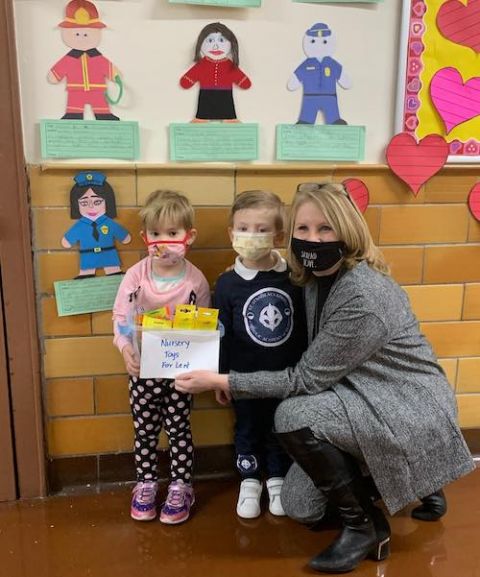 "You think of the hierarchy of need," Tyndall said. "They need to eat. They need to pay their rent and take care of their kids, and tuition is not a priority."

The school counted 245 students last year. This year they have 167.

"I am extremely fortunate that we are still open," Tyndall said.

About four miles north, Stephanie Germann, the principal of St. Joseph the Worker Academy in Windsor Terrace, had an entirely different problem: She could not hire new teachers fast enough.The school itself is diverse but is surrounded by a gentrified, majority white neighborhood; the Catholic school had long struggled to compete with good public schools. When those public schools went online, parents working from home bombarded the Catholic school, which promised five-day, in-person instruction, with inquires.

"The parents that registered early in July and August were just really sour about how remote learning took off in the springtime," Germann said.

As New York City public schools vacillated from online to in-person and back again in the fall, waiting lists at St. Joseph grew. The school went from 180 students and 11 classroom teachers last year to 275 students and 25 teachers now. Even more students are already registered for next year.

The bottom line, however, is that across the country the losses from schools serving working class and minority parents were more significant than the gains at wealthy, whiter schools, especially in large dioceses.

The 11 dioceses with the largest enrollments accounted for 35% of the national decrease, and though 7% of students in Catholic schools nationally are Black and 6% are in the federal classification of Title 1 low-income, 18% of students in schools that closed last year were Black and 15% were low-income. 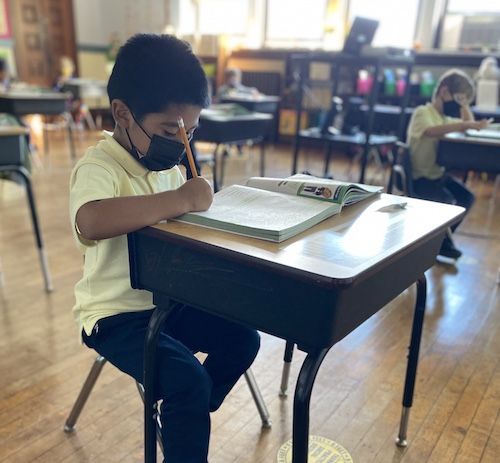 Donoghue at the bishops' conference said the numbers point to a misallocation of Catholic education's resources. There are too many Catholic schools in New England, the Mid-Atlantic and Rust Belt states with shrinking populations and not enough in the fast-growing West.

Despite the collapse of tourism to the Las Vegas region, Catholic schools in that diocese grew enrollments by 5.5% last year, the fastest in the nation, by opening a new elementary school in Henderson, Nevada, Superintendent Catherine Thompson told NCR.

The booming city of 320,000 southeast of Las Vegas had been the country's largest without a Catholic school, according to Thompson.

Even in the hard-hit northeast, school leaders remain confident that preschoolers have started coming back and that the schools will hold on to their pandemic gains in the upper grades.

"I don't have a crystal ball," Brooklyn's enrollment director Ted Havelka told NCR. "We do expect to see a bounce back."

At Our Lady of Perpetual Help, Principal Tyndall arrives at her school every day before dawn and gets on the phone with the diocese, donors and local media to keep the school she loves afloat.

"It looks bleak," she said. "However, our faith does not let us give up."

A version of this story appeared in the March 19-April 1, 2021 print issue under the headline: Catholic schools' pandemic enrollment plunge .