Government to lift health measure that blocks entrance of asylum-seekers 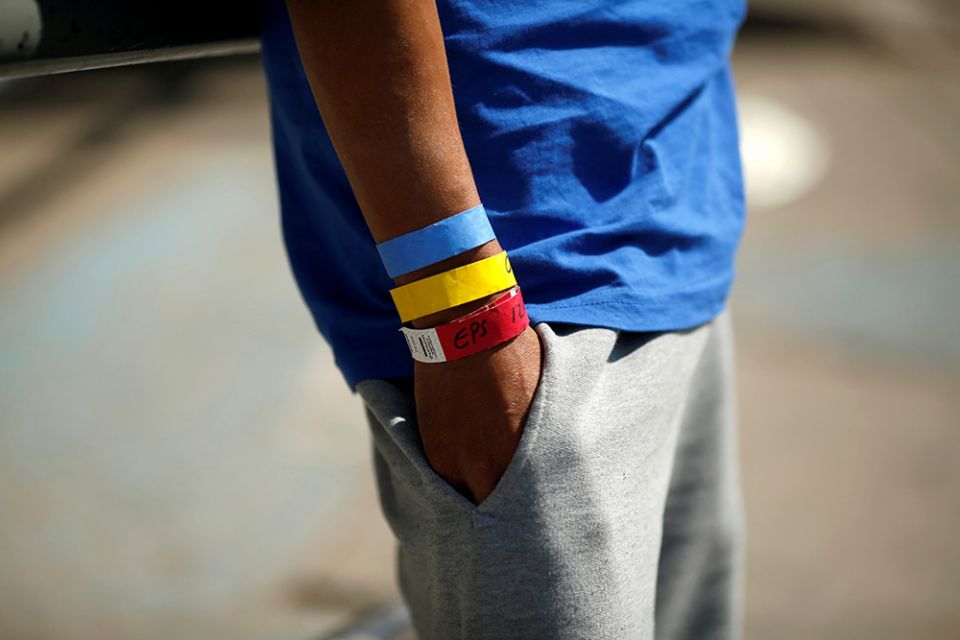 Bracelets used by the U.S. Border Patrol are seen on the arm of a Central American migrant near the Paso del Norte international border bridge in Ciudad Juarez, Mexico, Oct. 1, 2021. The migrant was expelled from the U.S. and sent back to Mexico under Title 42. (CNS/Reuters/Jose Luis Gonzalez)

Washington — The Biden administration has confirmed it will lift a public health measure in May that was put in place at the start of the coronavirus pandemic that has kept asylum-seekers out.

Catholic groups that support immigrants have long been calling for an end to Title 42 of the Public Health Safety Act, which the Trump administration began using in March 2020 as infections of the coronavirus began to surge in the U.S.

On April 1, the Centers for Disease Control and Prevention said on its website, "After considering current public health conditions and an increased availability of tools to fight COVID-19 — such as highly effective vaccines and therapeutics — the CDC director has determined that an order suspending the right to introduce migrants into the United States is no longer necessary."

Under the provision, Border Patrol agents were instructed to expel anyone caught trying to illegally enter the U.S. instead of processing them under existing immigration law for those seeking asylum.

The Biden administration has taken heat from Catholic groups, among others, for keeping Title 42 in place. Administration officials said it was not immigration policy but a health measure and that the government would take cues from the CDC on when to end it.

Many are expecting an increase in migrants looking for asylum at the southern border when the measure is lifted.

On March 22, Senate Minority Leader Mitch McConnell, R-Kentucky, said there would be an "utter meltdown" if Title 42 were lifted.

On its website, the U.S. Customs and Border Protection says the provision prohibits "the entry of certain persons who potentially pose a health risk, either by virtue of being subject to previously announced travel restrictions or because they unlawfully entered the country to bypass health screening measures."

Some like Anna Gallagher, executive director of the Catholic Legal Immigration Network Inc., known as CLINIC, have attacked Title 42 since its implementation, calling it a shameful and racist action designed to keep migrants out.

"While we watch much of the nation remove their masks at the public health guidance of this administration, we simultaneously watch the same administration continue to expel vulnerable people back to harm for the supposed protection of public health. We will not stay silent in the face of such hypocrisy," she said in a March 21 news release from CLINIC.

Women religious and their supporters protested outside the White House in December urging Title 42's demise.

There's "no present public health justification for its continuation," they added in a joint letter to President Joe Biden and key members of his administration.

The U.S. "must rescind Title 42 immediately so that no one is denied the right to seek protection," Giulia McPherson, Jesuit Refugee Service director of advocacy and operations, said in the letter.

Other faith-based groups, including the Washington-based Lutheran Immigration and Refugee Service, also have called for its end.

"We are grateful that this long and shameful chapter in our nation's history is coming to end," said Lutheran Immigration and Refugee Service president and CEO Krish O'Mara Vignarajah.

The decision recognizes that people fleeing violence and persecution have the right to seek protection, she said, while acknowledging the political fallout to come from lifting the measure.

"We know there will be much political theater surrounding this decision, but we urge the administration to remain focused on upholding our nation's legal and humanitarian obligations to those seeking safety at America's golden doors," she said.

In its announcement, the CDC said that with help from other departments, it would "implement additional COVID-19 mitigation procedures. These measures, along with the current public health landscape where 97.1% of the U.S. population lives in a county identified as having 'low' COVID-19 Community Level, will sufficiently mitigate the COVID-19 risk for U.S. communities."