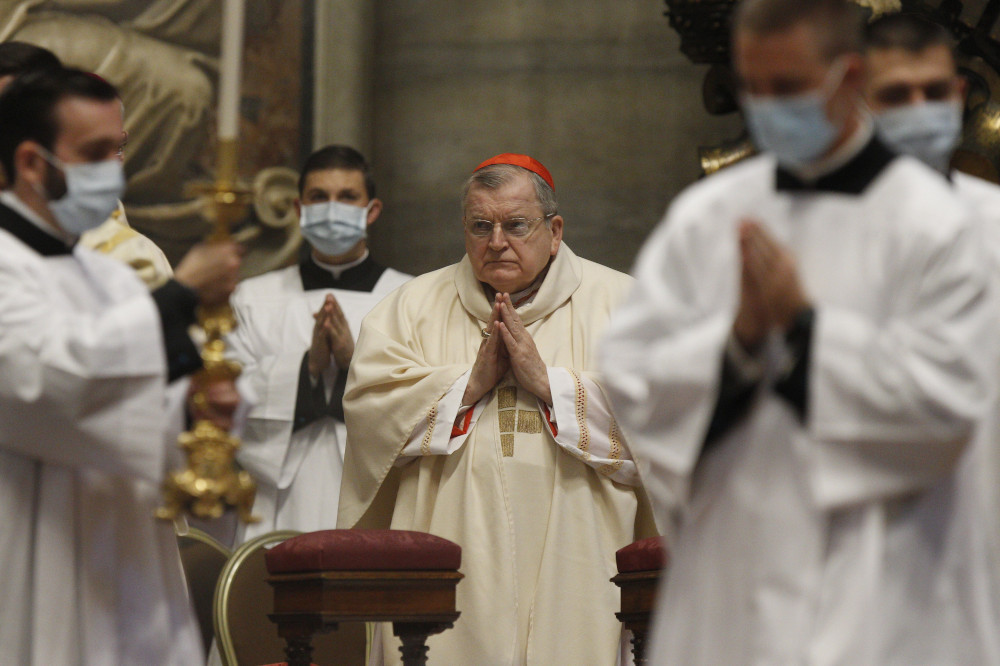 Cardinal Raymond Burke thanked health care workers as well as people who have been praying for him as he continues his recovery from COVID-19.

In an Aug. 28 letter posted on his website, he said he would remain hospitalized as he begins what he described as "intensive rehabilitation."

The cardinal did not disclose his location.

His letter credited hospital staff who have "provided vigilant, superb and steadfast medical care" during his hospitalization.

"For these dedicated professionals, too, I offer heartfelt thanks, as well as to the priests who have ministered to me sacramentally. To those who have offered innumerable rosaries and prayers, lighted candles, and requested the offering of the Holy Mass, I extend my sincere gratitude, and I ask the Lord and his Mother to bless all of you," the letter said.

He also said that his illness had united him with all people "suffering from the effects of the COVID-19 virus."

Citing the motto he took when he was named a bishop, secundum cor tuum (according to your heart), Burke said his suffering, united with Jesus' suffering on the cross, "is truly efficacious in his Divine Plan for our salvation when accepted willingly and wholeheartedly."

"United with Jesus Christ, priest and victim, I offer all that I suffer for the church and for the world," he wrote.

The cardinal's official Twitter account Aug. 14 indicated the 73-year-old prelate had been admitted to the hospital with COVID-19 and was "being assisted by a ventilator." He first tweeted Aug. 10 that he had tested positive for the coronavirus that causes the illness.

The cardinal has not made it public knowledge on whether he was vaccinated for the 2019 coronavirus.

The Vatican had started offering all Vatican residents, retirees and employees the vaccine developed by Pfizer and BioNTech mid-January 2021. The cardinal was eligible for the vaccine as a member of the College of Cardinals and a member of the Apostolic Signatura, which he led as prefect from 2008 until his resignation in 2014.

Burke has expressed concerns about the COVID-19 vaccines, including that it is "never morally justified to develop a vaccine through the use of the cell lines of aborted fetuses. The thought of the introduction of such a vaccine into one's body is rightly abhorrent."

He also said that the "vaccination itself cannot be imposed, in a totalitarian manner, on citizens."

In December, the Vatican Congregation for the Doctrine of the Faith, citing church teaching, said that when alternative vaccines are not available, it is morally acceptable to receive vaccines developed or tested using cell lines originating from aborted fetuses, in this case, including COVID-19 vaccines.

The Pfizer and Moderna vaccines did not use abortion-derived cell lines in developing or producing their vaccines, but they did in lab testing.

While he was La Crosse's bishop, Burke founded the Shrine of Our Lady of Guadalupe, which has been handling his correspondence during his illness.

While the cardinal often resides in Italy, he travels extensively and was in the United States at the time of sharing the news about contracting the virus.