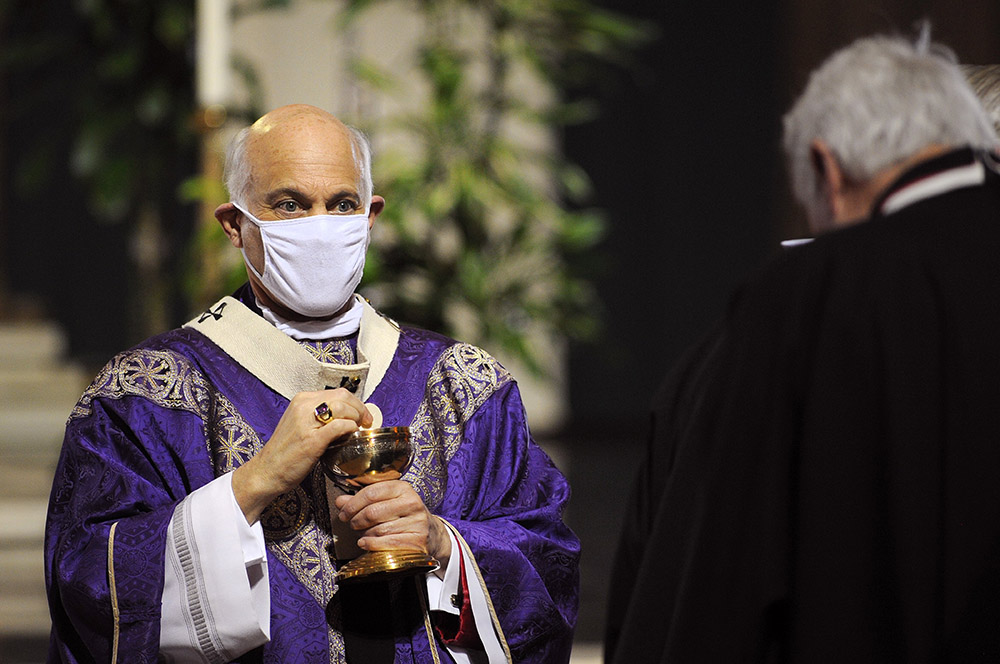 Archbishop Salvatore Cordileone distributes Communion during a Mass for the homeless at San Francisco's Cathedral of St. Mary of the Assumption Nov. 6, 2021. (CNS/David Maung)

San Francisco Archbishop Salvatore Cordileone, who revealed in a recent interview that he is not vaccinated for COVID-19, is scheduled to celebrate a pontifical high Mass this month in New York City, where the omicron variant has local hospitals filled to capacity.

New York City has a strict vaccination mandate for many indoor public settings, such as restaurants, entertainment venues and recreation centers, but that requirement does not extend to churches and other houses of worship.

"In fact, [Dolan] invited [Cordileone] to stay with him at his residence," said Zwilling, who added that Cordileone had already made other arrangements. Zwilling said the archdiocese has encouraged local Catholics to be vaccinated.

"However, we are relying on their honesty in attending [Mass]," he said. "We are not checking vaccine cards at the door."

The San Francisco Archdiocese did not respond to an NCR query for an update on Cordileone's vaccination status.

The Benedict XVI Institute for Sacred Music and Divine Worship, a San Francisco-based nonprofit that Cordileone helped found in 2014, is sponsoring the Mass, which is scheduled to be held Jan. 15 at the Basilica of St. Patrick's Old Cathedral in lower Manhattan.

The Eternal Word Television Network, the conservative Catholic media conglomerate, will livestream the Mass in New York. Cordileone will celebrate the liturgy according to the reformed Roman missal, but in Latin and ad orientem, facing the altar, with the Benedict Sixteen choir and orchestra performing music by composer Frank La Rocca.

"It will be a beautiful and uplifting event and a true experience of the sacred," Cordileone said in a video promoting the liturgy.

Websites asking people to register in advance for the Mass instruct attendees to arrive 30 minutes prior to guarantee they will have a seat in the church, which was the cathedral for the New York Archdiocese until the current St. Patrick's Cathedral on Fifth Avenue opened in 1879.

While New York City has one of the country's strictest vaccination mandates for many indoor venues, businesses and private schools, a New York State mandate through at least Jan. 15 also requires everyone to wear a mask in all indoor settings unless the business or venue implements a vaccine requirement. Churches and other houses of worship are not exempt from the state's indoor mask mandate.

Zwilling said the archdiocese follows all city and state guidelines and mandates for COVID-19.

"In addition, we have our own protocols (similar to other dioceses — communion under the one form, no sign of peace, no holy water, increased cleaning and sanitation) which have proven to be very effective in the 18 months since public Mass resumed here in New York," Zwilling told NCR in an email.

Driven by omicron, the latest wave of the coronavirus pandemic has hit New York hard.

As of Jan. 11, the daily average of confirmed positive COVID-19 cases in New York City stood at 31%, an increase from the previous 28-day average, according to the city's health department. Hospitalizations and deaths citywide have increased over the past month.

Noting the pandemic's omicron-related winter surge, the New York City Department of Health has advised local residents to be vaccinated, to wear masks when not at home and to avoid crowded spaces, especially indoors. Overall, New York state ranks second among states where the virus is spreading the fastest on a per-person basis, according to a USA TODAY Network analysis of Johns Hopkins University data.

In a Dec. 1 interview with the San Francisco Chronicle, Cordileone said he was not vaccinated. He told the newspaper that his "immune system is strong," and that his personal physician had told him that "it's probably not necessary" for him to be vaccinated.

Cordileone also incorrectly suggested that the inoculations the federal government approved for COVID-19 "are not really vaccines."

In a recent email, the San Francisco Department of Public Health told NCR that "the data overwhelmingly shows" that COVID-19 vaccines are "proven to be safe and effective in preventing severe illness and death, and slowing the spread of the virus in the community."

"We commend San Francisco residents who have sought out information on the efficacy and safety of the COVID-19 vaccine and have made the choice to get vaccinated, and boosted for their health and wellbeing as well as for the benefit of the community," the department said.