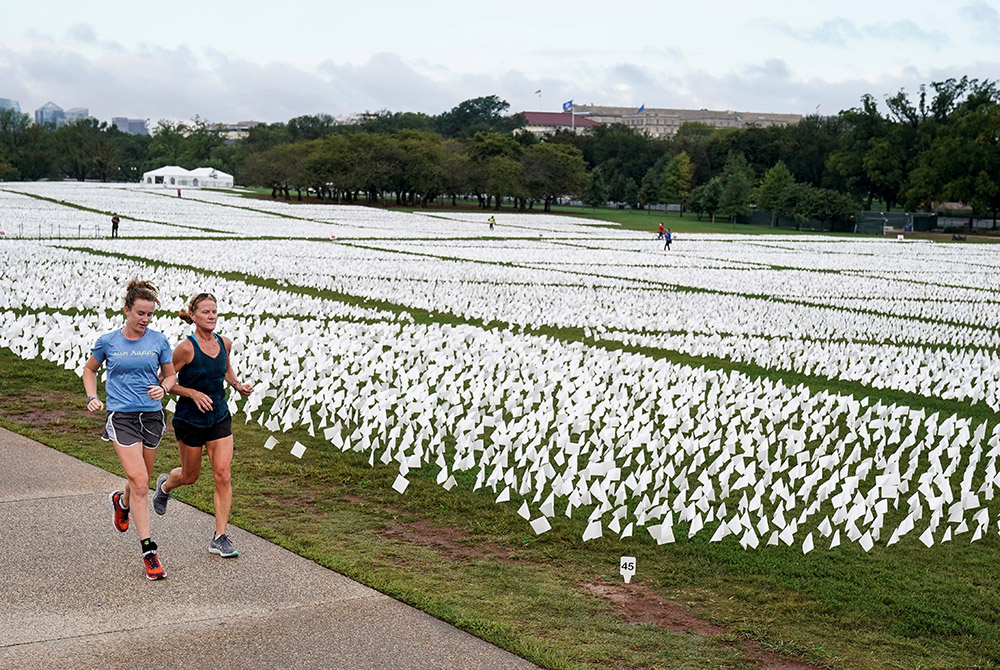 Women in Washington run past an exhibition of white flags at the National Mall Sept. 17, that represent Americans who have died of the coronavirus disease. (CNS/Reuters/Joshua Roberts)

In 1918 and 1919, the flu pandemic claimed the lives of tens of millions of people worldwide and hundreds of thousands in the United States.

Following the flu's devastation in the U.S., Americans processed the collective trauma by pushing it out of public consciousness. It is not clear exactly why they did so, though perhaps the inability to fully comprehend, let alone successfully triumph over this disease explains much of it. Medical science produced no effective treatment, vaccine or full understanding of the flu.

One consequence of our failure to grapple with this powerfully disruptive force was our failure to reshape American society in its wake. Instead of unsettling our commitment to social divisions, the pandemic exacerbated and reinforced them. Historians have reminded us that though the disease respected no national, religious, class, gender or racial boundaries, and sought to infect all regardless of their stations in life, it did not leaven our commitment to those boundaries.

More than 18 months into the latest global pandemic, many are wondering what we have learned from COVID-19, which has killed more than 4 million people worldwide and more than 700,000 in the U.S., and how we will continue to collectively process the ongoing trauma.

Two recent publications offer useful chronicles that allow us to both relive the pandemic and see it through fresh eyes. One conveys the immediacy and power of the early months of a tragedy that appears to be reshaping America in profound ways. We get a sense of the pandemic's powerful force, but not of where that force will lead our society. The other both extends that story and seeks more intently to interpret it. Each book highlights this pandemic's potential to commit us to the common good, to see in our shared peril a common human destiny. Yet they also offer evidence that many of us prefer to avert our gaze. 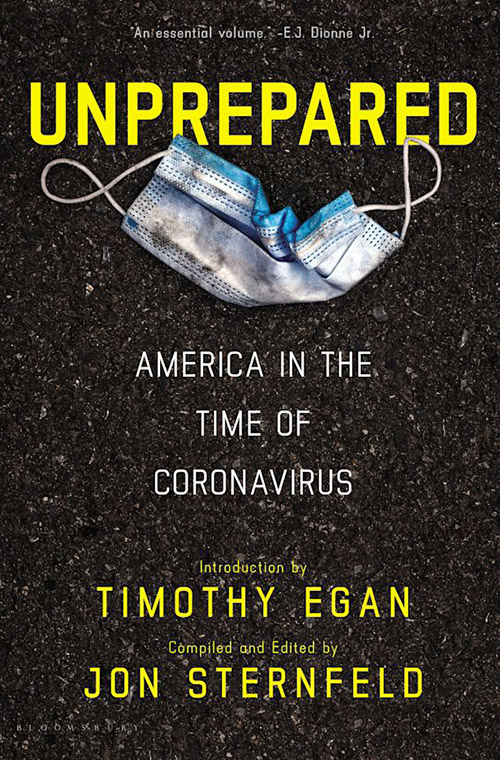 In Unprepared: America in the Time of Coronavirus, Jon Sternfeld compiles public statements from mostly political and public health leaders into an account that follows chronologically from Dec. 31, 2019, through June 5, 2020. He offers no direct commentary or interpretive narrative to contextualize these short quotes, which might sound like a dry and disjointed approach to portraying the national experience. But it makes for compelling reading. Sternfeld gleans important and revealing statements that convey the rawness of American experiences and juxtaposes telling quotes that remind us of the strangeness — in all meanings of the word — of the last 18-plus months.

Donald Trump figures centrally in this account, as we see his consistently narcissistic and often bizarre utterances. For him this pandemic was mostly a personal crisis, an assault on his political ambitions and personal financial prospects. Sternfeld features the former president's statements at press conferences or on Twitter, which will not surprise anyone who paid close attention to the news during the pandemic, but they seem startling in light of what we have heard from the man who followed Trump in the Oval Office.

When an NBC reporter asked the president what message he might have for fearful Americans in the early days of the pandemic when only about 200 Americans had died but more than 14,000 had tested positive, Trump responded with invective. "I say that you're a terrible reporter. That's what I say. … I think it's a very nasty question." In an often-noted cavalier moment weeks later, Trump mused that "I see the disinfectant, where it knocks it out in one minute. And is there a way we can do something like that, by injection inside or almost a cleaning, because you see it gets in the lungs and it does a tremendous number on the lungs, so it'd be interesting to check that, so that you're going to have to use medical doctors with, but it sounds interesting to me." That same day a U.S. Food and Drug Administration commissioner countered that "I certainly wouldn't recommend the internal ingestion of a disinfectant."

The central theme that emerges in Sternfeld's book is the manifest inability of America's society — its institutions, governments, health care system — to meet the COVID-19 challenge. The central dynamic in that story is the tension that Trump created between the federal government and the states. By steadfastly resisting any coordinated national response to the pandemic he pitted states against each other in their efforts to obtain equipment and medical devices necessary to respond to the health crisis. 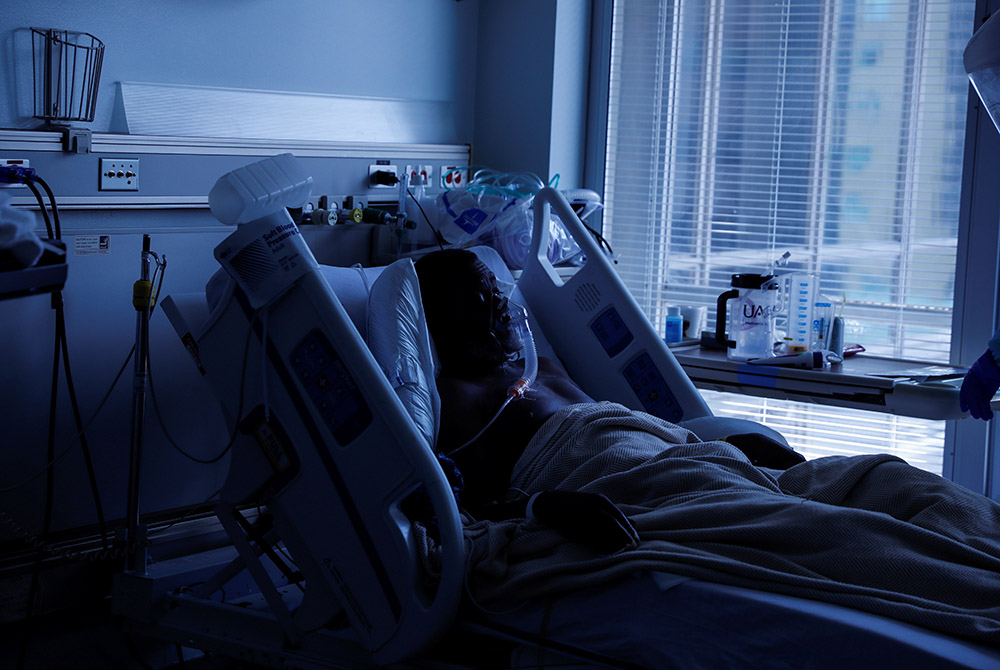 A COVID-19 patient in Little Rock, Arkansas, lays in his isolation room in the COVID-19 unit Aug. 16 at the University of Arkansas for Medical Sciences. (CNS/Reuters/Shannon Stapleton)

In Unprepared the governors emerge as heroic in their efforts to reduce suffering and stop the virus's spread. Ironically, given revelations in the summer of 2021 of his abusive personal behavior, Andrew Cuomo emerges most prominently among the governors as the rational and empathetic anti-Trump. As early as February 2020 Cuomo expressed concerns that New York City's population density and its appeal to international travelers made it vulnerable to the virus, even as he insisted both that the city's health care providers were the best in the world and that he deemed the risk to New Yorkers to be low.

By the end of March 2020 though, he championed more aggressive responses to the spreading virus. His daily press conferences served as antidotes to Trump's briefings. Cuomo's insistence that we respond compassionately and rationally to the coronavirus contrasted powerfully with Trump's manifest indifference to the pain that Americans endured. While the governors pleaded for ventilators, Trump bragged about the ratings that his press conferences scored.

Though Sternfeld offers no transparent interpretation, he organizes the quotes so as to create a narrative arc. He begins in December 2019 with "The Arrival," moves to "The Emergency," then to "The Lockdown," "The Opening" and finally "The Reckoning." The trajectory of these chapters suggests a beginning and an ending, but we remained far from reckoning with the pandemic in June 2020. Too much of the story still lay ahead, including the tragic story of George Floyd's murder by Minneapolis police officers and the social uprising that followed in cities and towns all across the nation. 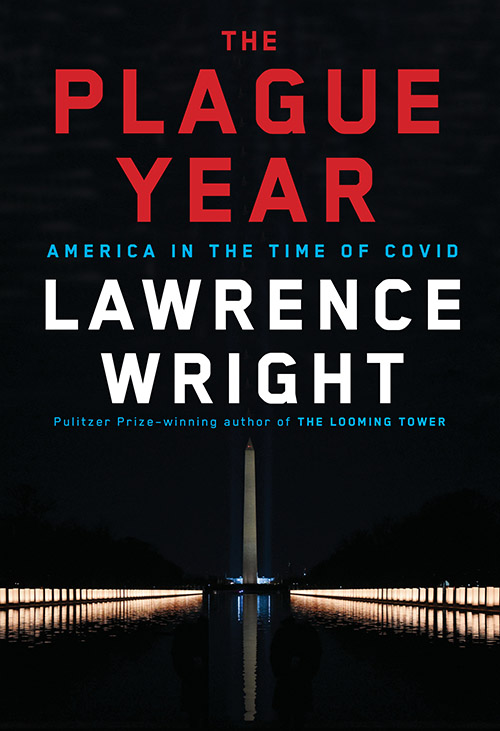 The Plague Year: America in the Time of Covid
Lawrence Wright
336 pages; Knopf
$28.00

In the second book, The Plague Year: America in the Time of Covid, Lawrence Wright helps us to see six months beyond June as he stretches his narrative across the entire first year of the pandemic, from earliest outbreak to the development and early distribution of successful vaccines. The Plague Year might have seemed to address the full history of COVID-19 had we not lived through the spring and summer of 2021, two periods that any future history will have to highlight.

Wright does offer an interpretative framework that includes heroes and villains. The Chinese government plays villain at the outbreak's outset. More concerned about public image than containing the virus's spread, government officials not only forbade free communication about the virus among health officials, but even jailed a physician who tried to share information vital to treating the sick and protecting health care professionals. The Chinese government withheld critical information that might have led even the unprepared Trump administration to respond more quickly than it did. Wright's readers see much more about the virus's origins, spread and biology than do Sternfeld's.

The two books converge pretty strongly when they address the Trump administration's response. Wright offers the view from inside the White House, primarily through the eyes of Matt Pottinger, who worked for the National Security Council. In Wright's telling, key players in the administration, such as Larry Kudlow, Mark Meadows and Kevin Hassett fed Trump's obsession with the pandemic's impact on his political fortunes, which he understood to depend almost entirely on both the economic landscape, as seen through the stock markets, and the level of praise that Fox News hosts and guests sent his way. Wright portrays Pottinger as morally grounded and insightful, troubled by the vacuous obsequiousness that characterized Trump's economic and political aids, and sufficiently, ethically outraged that he resigned belatedly from the administration, a mere two weeks before Biden's inauguration.

Wright's story contends more fully with the national uproar sparked by George Floyd's murder on May 25, 2020, and with the racial and ethnic disparities that the pandemic highlights. 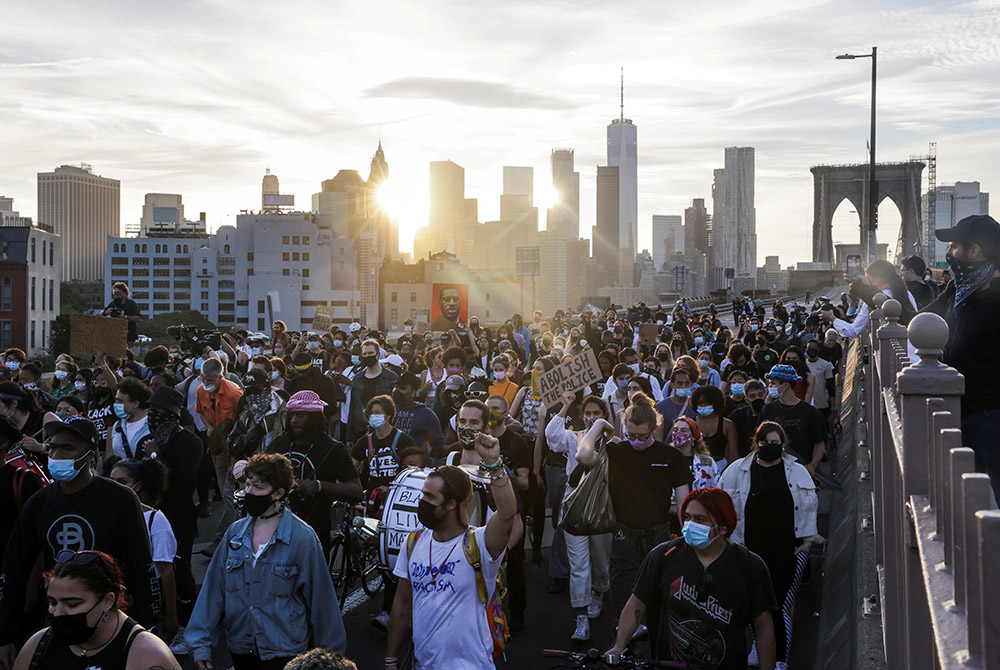 People in New York City march on the Brooklyn Bridge during a demonstration May 25, 2021, on the first anniversary of the death of George Floyd. (CNS/Reuters/Jeenah Moon)

Wright notes that "nationwide, Blacks and Latinos contracted the virus at a rate three times greater than whites." Disparities in wealth dictated people's ability to retreat from extensive social contact, and exposed service workers to risks that others could escape. But the protests that brought tens of thousands of Americans to the streets in the midst of the lockdown focused on practices that long predated the coronavirus. Police killings of Black men and women, increasingly documented with cellphone videos, had the body politic on simmer for over a decade. George Floyd's death struck a nerve that the pandemic had rubbed raw.

Wright ends his story with an account of his own frantic search for a dose of a vaccine and Joe Biden's ritualized remembrance Jan. 19, 2021, the eve of his inauguration, on the National Mall, of the then 400,000 who died. It seemed even more like a reckoning than Sternfeld could conjure from the events of June 2020. But the death toll has risen by another 75% since then and Americans have rejected by the millions the vaccine that Wright so desperately sought in January 2021. The delta variant pushed us to the brink of another lockdown, a path inconceivable in states whose governors will not even allow schools to take such rudimentary safety steps as mandating mask wearing.

Notably, none of the most powerful voices in Sternfeld's book nor the key actors in Wright's presentation come from the religious sphere.

In the face of what we might reasonably see as the greatest threat to society in more than a half-century, many church leaders remained mostly on the sidelines. This was certainly so for Catholic Church officials who shied from championing effective public health measures that could have preserved so many lives. They do not appear in either volume reviewed here. Their obsession with encroachments on religious liberty pinched their capacity to shape our response to the pandemic. Absent were the prophetic voices we heard when the world grappled with the threat of nuclear annihilation in the 1980s.

It remains unclear whether COVID-19 has pushed Americans to reimagine ourselves as a society committed to racial justice, universal access to health care and robust public policies aimed at promoting the common good. The federal government has adopted policies unimaginable just three years ago to ease the distress that so many Americans have endured over the past 18-plus months and even opened a debate about whether we should reduce the record wealth and income inequalities that exist today. We may see a new society on the other side of this pandemic, and Sternfeld and Wright will certainly help us understand what prompted this rebirth if we do. At a minimum, they will make it hard for us to forget as we did a century ago.

A version of this story appeared in the Nov 26-Dec 9, 2021 print issue under the headline: In the time of coronavirus.