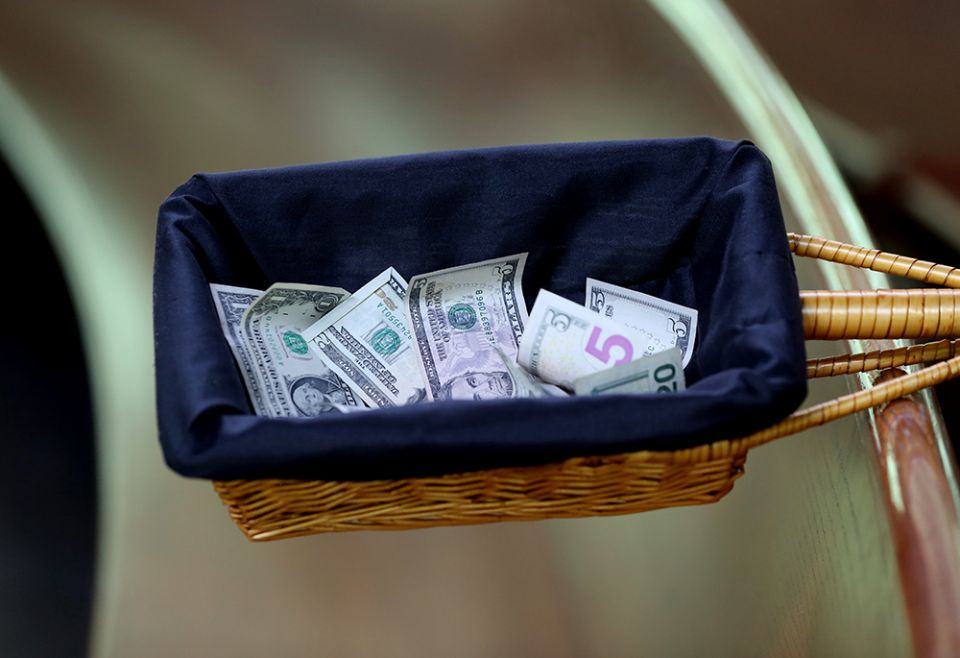 A collection basket with donations is seen in this illustration. (CNS/Bob Roller)

In the COVID-19 era, some pastors have found creative ways to stretch a dollar. One method is to keep churches just warm enough for the congregants, without running the heat all day during the winter.

"Financially, you don't want to cut corners on the necessities, but you find ways to pinch a penny," said Carmelite Fr. Nicholas Blackwell, parochial vicar at the National Shrine of Our Lady of Mount Carmel in Middletown, New York.

Blackwell told NCR that his parish, which operates a main church and two mission sites in the Hudson Valley's rural and mountain regions, is "still kind of surviving, collection to collection" two years after the novel coronavirus pandemic swept through the world.

But highlighting the uneven economic impacts that COVID-19 has had across society, Catholic parishes elsewhere are faring relatively well. Fr. Satish Joseph, pastor of three parishes in Dayton, Ohio, said his churches never had to apply for the federal government's Paycheck Protection Program loans that helped keep other church institutions and nonprofits afloat during the pandemic's early weeks in 2020.

"Even if they weren't coming to church in person, a lot of our people moved to the online giving platform. Some actually made large contributions, knowing that COVID had really impacted the parish," said Joseph, who told NCR that two of his parishes also had savings to sustain them for up to eight months.

Those pastors' experiences align with what church financial and management experts have observed since mid-March 2020, when the pandemic prompted Catholic bishops across the country to suspend public services.

With people not attending Mass in person for months, weekly collections cratered. A shift to online giving helped make up some of the losses, but officials said the financial impact has most likely compromised the long-term sustainability of parishes that were already struggling before the pandemic.

"It's been an uphill battle, and it will continue to be an uphill battle for a lot of these poor parishes," said Joe Boland, vice president of mission for Catholic Extension, an organization that provides funding and resources for economically vulnerable and mission dioceses across the United States.

During these challenging economic times for the church, many Catholics across the country have increased their giving. But experts say that model is not sustainable, especially when Mass attendance is still, at their estimate, about 70% of what it was in early 2020. 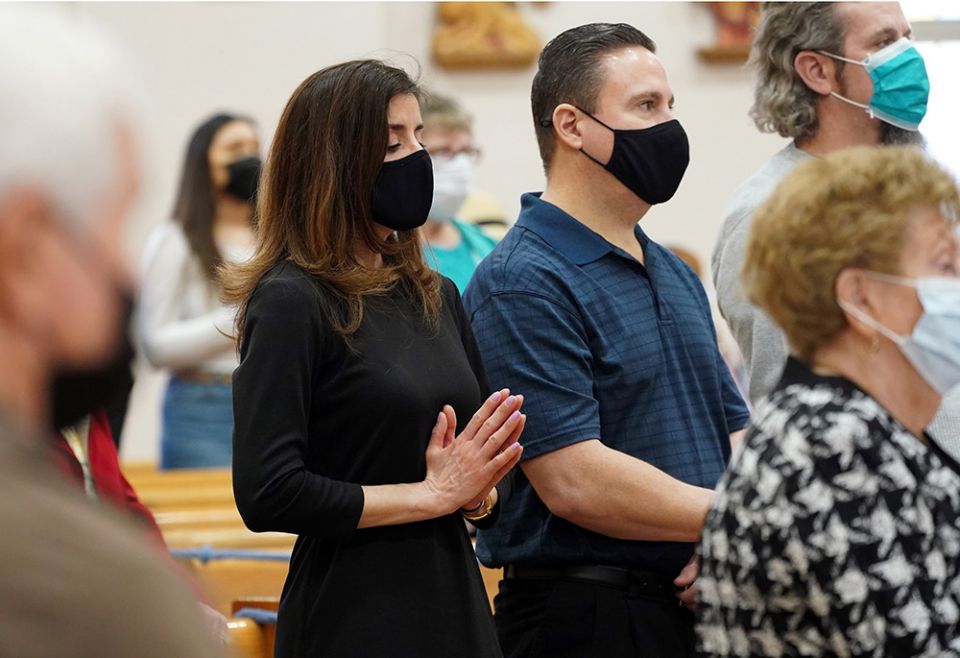 Worshippers attend Easter Mass April 4, 2021, at St. Peter the Apostle Church in Islip Terrace, New York. The Diocese of Rockville Centre, New York, was one of four dioceses that filed for Chapter 11 bankruptcy protection amid the pandemic and clergy sex abuse survivors' lawsuits. (CNS/Gregory A. Shemitz)

"Even with things returning to a new normal there are still the deficits from 2020-21 that will likely take time to overcome," said Mark Gray, a senior research associate at the Center for Applied Research in the Apostolate at Georgetown University. Gray told NCR that the pandemic's impact on the Catholic Church in the United States is a "complex picture."

"Every diocese, parish, school and other Catholic institution is unique and there is no national clearinghouse of data that could give us a clear portrait," Gray said. 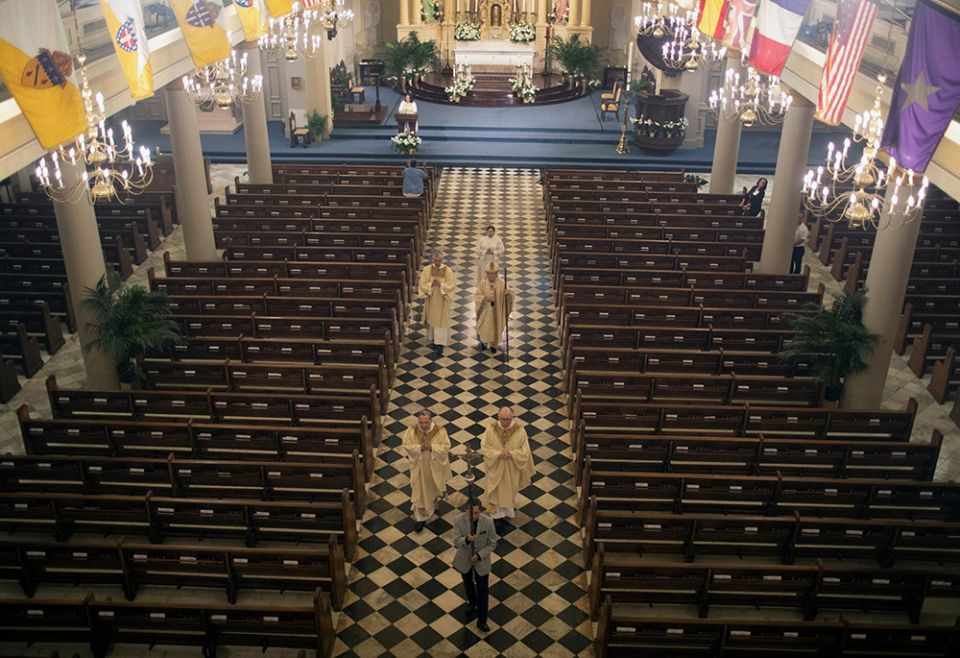 "Better to sell a building or two than default on these sacred obligations," Doyle said.

Meanwhile, dioceses like Providence, Rhode Island, reported closing out the 2021 fiscal year "on very sound financial footing," in large part due to a bullish stock market that boosted the value of combined diocesan investments.

In March 2020, the Diocese of Greensburg, Pennsylvania, implemented online giving in all its parishes. Sheila Murray, the diocesan chief financial officer, and Jennifer Miele, the diocesan spokeswoman, told NCR in an email that the diocese asked each parish to create and mail a state-of-the-parish report that would include detailed information about parish missions and ministries, financial information, capital improvement and COVID-19's impact. The diocese offered to assist parishes that could not produce the report themselves.

"The Diocese of Greensburg, its parishes and faithful volunteers continued to serve the community during the COVID-19 pandemic," Miele and Murray wrote. They said the offertory decreased by 5% in 2020 but increased by 2% in 2021 and is on pace to increase by 3% in 2022.

A Villanova University study in November 2020 estimated a 24% decline in the offertory for the 2021 financial year, after surveying 169 parishes in three dioceses.

Matt Manion, director of the Center for Church Management at Villanova, told NCR that his own research since then indicates that because Mass attendance across the board is still down by an estimated 30% to 40%, fewer people are financially supporting the church and its institutions.

"But the interesting phenomenon is that in a number of places, the overall collection is not down because the bigger donors are giving more," said Manion, who attributed that trend in part to strong stock market gains during the last couple of years. However, he warned that the church cannot indefinitely rely on larger contributions from fewer people.

"Generally speaking, those who are giving more are older, and when they pass on, they're being replaced by fewer younger givers who are giving less," Manion said.

"But the interesting phenomenon is that in a number of places, the overall collection is not down because the bigger donors are giving more."
—Matt Manion

Patrick Markey, the managing partner of Leadership Roundtable, a group that advises church authorities on management issues, also told NCR that many Catholics, even if they were concerned about the economy and worried about their own jobs, "stepped up" over the last couple of years.

"When they weren't going to Mass, they were still giving," said Markey, who from his own informal surveys of diocesan officials said that most of them report Mass attendance being anywhere from 60% to 70% of pre-pandemic levels.

Sally Vance-Trembath, a theologian at Santa Clara University, told NCR that the pandemic highlighted the failure of Catholic parishes across the country to "professionalize" their operations over the last 50 years. She suggested that parishes with full-time professional lay staff who work in collaboration with pastors were better positioned to respond to the financial and ministerial challenges posed by COVID-19.

Vance-Trembath, a former vice president of Voice of the Faithful, a reform group formed after the 2002 reporting on clergy abuse in the Boston Archdiocese, said financial transparency is still not a strength across the board in many Catholic parishes and dioceses, where the level of detail in financial reports vary by location.

"We want to know where our money goes and if it is well spent," she said.

In Wilton, Connecticut, Fr. Reginald Norman, pastor of Our Lady of Fatima Church, told NCR that his parishioners have been "slowly" coming back to church. But unlike before the pandemic, Norman said he has no idea what Mass attendance will look like week to week.

"I don't think any of the churches have fully recovered because people still haven't returned in the numbers that they were before the pandemic," said Norman, who estimated that his offertory fell by 90% in one week when the pandemic hit. He said online giving now constitutes about 40% of his weekly collection, which he said is still down about 20% to 30%.

"I don't think any of the churches have fully recovered because people still haven't returned in the numbers that they were before the pandemic."
—Fr. Reginald Norman

"What saves you is that online giving," said Norman, who added that "every once in a while, you get an occasional big check in the mail that you normally wouldn't have gotten." He expects at least another year of financial volatility before the parish finances stabilize.

"Until then, it's a guessing game," he said.

Norman's church is still in relatively good financial shape compared to other parishes, especially those along the U.S.-Mexican border, in Native American reservations and in Alaskan villages, said Boland of Catholic Extension.

"It's our mission to make sure that dioceses and parishes don't have to operate on a day-to-day basis, but unfortunately, there are many that are a long ways away from self-sustainability," said Boland, who noted that about 250 parishes across the United States have responded to Catholic Extension's "Catholic Kinship Initiative" to provide aid to struggling parishes and dioceses.

However, even with financial assistance, experts fear that more than two years of pandemic-related financial headwinds have weakened many struggling parishes to the point that they are at increased risk of being closed or consolidated with other parishes. That trend predates COVID-19, but Manion said the pandemic most likely "accelerated" the trajectory for some parishes by several years.

"I can't see a future where the next couple of years don't involve some serious adjustments to the number and location of churches in the United States," Manion said. "There will be some very hard decisions to be made in the years ahead."

A version of this story appeared in the March 18-31, 2022 print issue under the headline: Two years into pandemic, some parishes stretch their dollars .