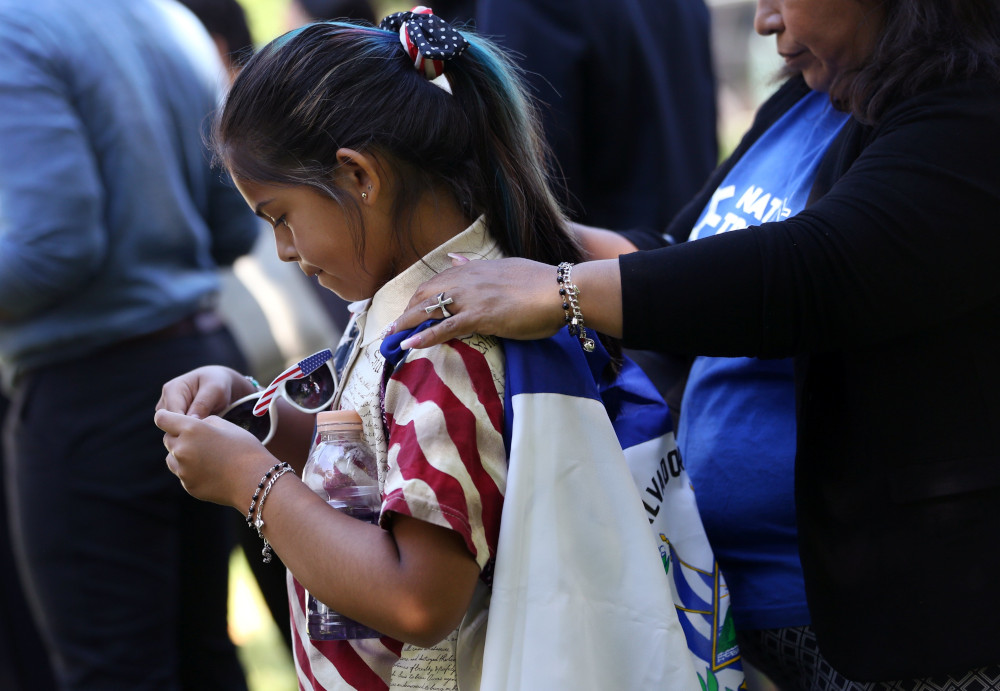 Marilyn Miranda, 9, draped in a Salvadoran flag, attends an immigration rally with her mother outside the U.S. Capitol in Washington June 4, 2019. A Sept. 14, 2020, decision from the U.S. Court of Appeals for 9th Circuit in Ramos v. Nielsen brings the Trump administration one step closer to ending Temporary Protected Status, or TPS, for almost all people with TPS in the United States. (CNS/Reuters/Leah Millis)

The U.S. Court of Appeals for the 9th Circuit sided Sept. 14 with President Donald Trump's plan to end a particular immigration protection status that would have allowed people from six countries that have suffered disasters to remain in the United States.

The court said the president was within his rights to revoke what's called Temporary Protected Status, popularly known as TPS, from Salvadoran immigrants. TPS grants a work permit and a reprieve from deportation to certain people whose countries have experienced natural disasters, armed conflicts or exceptional situations, to remain temporarily in the United States.

The ruling also is expected to affect TPS holders from Haiti, Honduras, Nicaragua, Sudan and Nepal.

"He's ended it but what it means is that there's this six-month wind-down period," said Ashley Feasley, director of policy for the U.S. Conference of Catholic Bishops' Migration and Refugee Services. "It doesn't affect people's status this year. They still would be allowed to stay here and get a driver's license and work authorizations they have now."

But that could stop early next year.

The wind-down period for the estimated 300,000 TPS holders is different for different countries but all is expected to take place in 2021 if the plans goes forward. But that timing brings some to speculate that the U.S. presidential election and its result could affect what ultimately happens.

The situation is complex, said Feasley. There's also the issue of TPS holders who have families, including U.S.-born children, other pending legislation, possible involvement by the Supreme Court and there's also a possibility, though not likely, Congress could act to provide a path to citizenship for TPS recipients.

"The 9th Circuit's decision continues a heartbreaking path of uncertainty and fear for hundreds of thousands of TPS recipients needlessly put into motion by the Trump administration," said a joint statement from Archbishop Jose H. Gomez of Los Angeles, president of the U.S. Conference of Catholic Bishops; Washington Auxiliary Bishop Mario E. Dorsonville, chairman of the USCCB's Committee on Migration; and Sean Callahan, president and CEO of Catholic Relief Services.

"TPS countries such as El Salvador and Haiti cannot adequately handle the return of TPS recipients and their families. The spread of COVID-19 has only made conditions worse," they said, adding the decision "will fragment American families, leaving, for example, over 192,000 U.S. citizen children of Salvadoran TPS recipients without their parents and with uncertain futures."

They urged the nation "not turn its back on TPS recipients and their families."

"They too are children of God. We stand in solidarity with TPS recipients, who are here and have been living and working in the United States legally, and we will continue to do so with them in their countries of origin," the three said in the statement, released Sept. 15.

Gomez, Dorsonville and Callahan again called on the U.S. Senate to take up the American Dream and Promise Act, which the House passed last year.

"Without action by Congress," they said, "recipients' lives will be upended. Congress must act to ensure that such catastrophic human consequences do not occur."

The bill would provide TPS holders, Deferred Action for Childhood Arrivals recipients and those who have Deferred Enforced Departure status with protection from deportation and an opportunity to obtain permanent legal status in the United States if they meet certain requirements.

Other Catholic organizations in the U.S. wasted no time in voicing opposition to the ruling.

"Congress created Temporary Protected Status more than 30 years ago, rightly, because it would be unconscionable to deport people back to crisis and conflict," said Anna Gallagher, executive director of Catholic Legal Immigration Network Inc., known as CLINIC. "No family should be faced with the choice of either splitting up or moving their entire family, including U.S. citizen children, to a country where they face danger."

Sr. Marie Lucey, a Sister of St. Francis of Philadelphia, who is associate director of Franciscan Action Network, called the ruling "unconscionable" and said the decision was a "tragedy" for those with TPS and "a betrayal of all that is good in this country."