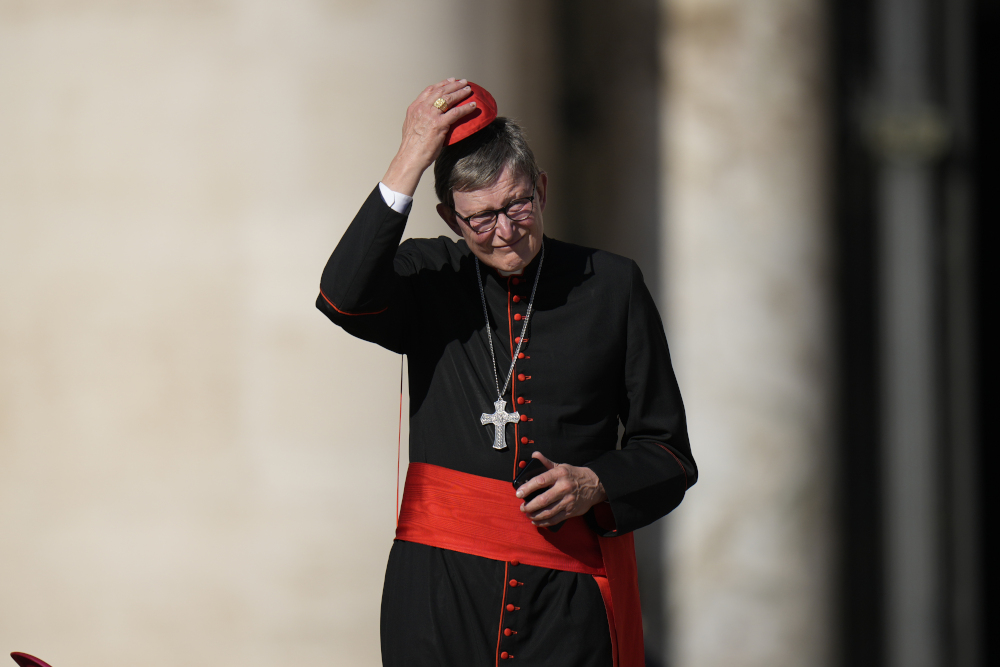 Cardinal Rainer Maria Woelki attends Pope Francis' weekly general audience in St. Peter's Square at The Vatican,, Oct. 5, 2022. Catholic believers in the Archdiocese of Cologne have protested their deeply divisive bishop and are leaving in droves over allegations that he may have covered up clergy sexual abuse reports. In the latest escalation of the crisis, Cologne prosecutors have opened an investigation against Cardinal Rainer Maria Woelki in two cases on suspicion of making false affidavits. (AP Photo/Alessandra Tarantino, File)

An unprecedented crisis of confidence is shaking a historic center of Catholicism in Germany — the Archdiocese of Cologne. Catholic believers have protested their deeply divisive archbishop and are leaving in droves over allegations that he may have covered up clergy sexual abuse reports.

While Cardinal Rainer Maria Woelki’s personal fate is in the hands of Pope Francis, the drama has reverberations nationwide, given that the Cologne archdiocese has more Catholics than any other in Germany -- about 1.8 million. Its double-domed cathedral is an iconic tourist attraction and one of the oldest, most important pilgrimage sites of Northern Europe.

And the crisis in Cologne, in which many thousands of Catholics in the region have left the church, is in some ways a microcosm of the issues playing out in the German Catholic Church as a whole as it undergoes a profound and controversial reform process precisely to respond to complaints by rank-and-file Catholics about the hierarchy’s responsibility for the clergy abuse crisis.

Some archdiocese employees have refused to attend meetings with the archbishop. Congregants of a Duesseldorf parish in the archdiocese raised red cards in protest when he visited last year, objecting to him administering the sacrament of confirmation to their children.

Dozens of altar boys and girls from the archdiocese turned their backs in protest to Woelki when he celebrated Mass with them during a trip to Rome in October. The choirs in the archdiocese recently reported a loss of 30% of their members, which they say is partially related to the coronavirus pandemic but also a clear repudiation of Woelki.

In the latest escalation, Cologne prosecutors last month opened an investigation against the powerful conservative cardinal in two cases on suspicion of making false affidavits. In each case, the question is whether Woelki, 66, had been informed earlier than he stated about allegations of abuse against certain clergymen. The cardinal rejects all accusations against him.

Even influential German politicians who normally steer clear of church politics have spoken out.

The minister for youth and family in the state of North Rhine-Westphalia, where Cologne is located, said she viewed the situation with bewilderment.

“Especially those in positions of responsibility must not look the other way and they must certainly not deny or cover up,” Josefine Paul said last month in a speech in the state parliament.

The church is expected to be a preeminent model of morality, and it has "set the highest moral standards for all kinds of people in society — does all this no longer apply to a bishop?" Tim Kurzbach, chairman of the diocesan council of Catholics in the archdiocese, told The Associated Press.

Kurzbach, mayor of the town of Solingen in the archdiocese, said he knows of several long-time parishioners who are leaving the church because they can no longer bear “the moral decay” in Cologne.

The crisis of confidence began in 2020, when Woelki, citing legal concerns, kept under wraps a report he commissioned on how local church officials reacted when priests were accused of sexual abuse. That infuriated many Cologne Catholics. A second report, published in March 2021, found 75 cases in which high-ranking officials neglected their duties.

The report absolved Woelki of any neglect of his legal duty with respect to abuse victims. He subsequently said he made mistakes in past cases involving sexual abuse allegations but insisted he had no intention of resigning.

Two papal envoys were dispatched to Cologne a few months later to investigate possible mistakes by senior officials in handling cases. Their report led Francis to give Woelki a “ spiritual timeout ” of several months for making major communication errors.

In March, after his return from the timeout, the cardinal submitted his offer to resign but so far Francis has not acted on it.

“I don’t think it got through to Rome how much the people here are suffering,” Kurzbach said. “Without a decision on the Cologne cardinal question, we will not get out of the crisis. The question must finally be resolved.”

The issue was raised when Germany’s bishops visited with the pope last month. The head of the German Bishops Conference, Limburg Bishop Georg Baetzing, told reporters that “it was made very clear that the situation in the archdiocese is increasingly unbearable, even for the archbishop.” The wait for a papal decision also is burdensome for German Catholics, he said.

Nationally, the number of Catholics leaving the church has also risen dramatically. Some 359,338 left in 2021, up from 221,390 in 2020. It is still the largest faith group in the country. About 21.6 million Catholics live in Germany, which has an overall population of 84 million.

“It’s clear that this is a difficult situation,” Cologne archdiocese spokesman, Juergen Kleikamp, told the AP last week. “But that’s just the way it is. In the Catholic Church, the pope has to decide and no one else.”

Meanwhile, Woelki is “doing his work to the best of his knowledge and also with great commitment,” Kleikamp said, adding that while some Catholics “are angry and quarrel with their church, there are others who applaud and rejoice when the bishop comes.”

Many Catholics, however, doubt the crisis can be easily fixed any time soon — even if the cardinal resigns.

Lay leader Regina Oediger-Spinrath, 61, called it “an absolute crisis of trust and credibility.” She is a spokeswoman for the professional association of pastoral assistants in the archdiocese, and thinks the crisis goes beyond the Cologne situation. Oediger-Spinrath said fundamental changes are needed, including more equality for women and LGBTQ people.

“Leadership needs to be rethought,” she said. “The way it is in the Catholic Church, that is absolutely hierarchical, some also say authoritarian from the top down — I believe, that many people no longer want to go along with that.”

Those demands are in line with the reform process, known as the “ Synodal Path," the German church launched with the country’s influential lay group, the Central Committee of German Catholics, to respond to the clergy sexual abuse scandals after a 2018 report found at least 3,677 people were abused by clergy between 1946 and 2014.

Preliminary assemblies have already approved calls to allow same-sex couple blessings, married priests and the ordination of women deacons. The movement, however, also sparked fierce opposition from the Vatican and conservative clergy in Germany and elsewhere.

While Oediger-Spinrath says she is ready to fight for changes, others have lost patience.

“I will leave the church,” says Peter Barzel, 65, a member of the St. Margareta parish in Duesseldorf. He helped organize last year's red card protest during Woelki’s visit.

Barzel, an active parishioner for decades, also tried to bring more attention to recent sexual abuse allegations lodged against two former St. Margareta pastors that have roiled the parish. Eventually, he gave up.

“I will certainly miss something when I leave the church, because the Christian faith is something you share with other people,” he said. “But I can no longer support this system.”